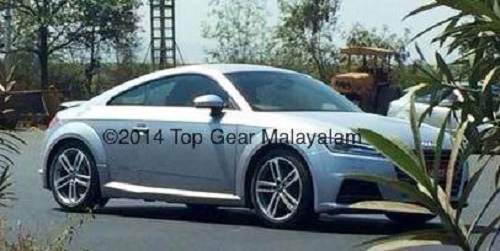 The Audi TT has a rich history. The names’ origin goes back to the brand Audi itself. The name TT, even though now stands for Technology and Tradition, traces its origins back to the NSU TT series of cars, which were named after the Isles of Man TT races.The NSU brand was later bought by Volkswagen and was assimilated to the Audi Union in the late 60s.

Now the TT has been a very successful car by Audi, and has been greatly appreciated the world over. Audi is readying the third generation of TT which was first showcased at the Geneva Motor Show in March. And surprisingly, the 2015 Audi TT was snapped here in India by a Top Gear Malyalam reader in Mumbai.

Considering that Audi sells the current-gen TT in India, there is all the possibility of the company considering launching it here and the car which you see on this page, may well be a test mule destined to test Indian conditions. Audi will start the next-gen Audi TT’s sales internationally sometime later this year.

The new TT has a sharp, angular exterior and is based on the new MQB platform (the old one was based on the PQ35). The new headlamp cluster has sharp lines and the new matrix LED technology (seen for the first time in the new Audi A8L) will be available as an option. The front also hoses a huge horizontal grille, the huge wheel arches continue to mesmerise the looks.

The rear has two exhaust ports at either end. The rear tail lamps looks just like the unit in the front. The artistic rear spoiler pops up automatically at 119kmph to add to the downforce. The interiors too get a neat and uncluttered look which will be greatly appreciated by many. The new Audi TT has a 305L bootspace which can be further increased by folding the rear seats. The car continues to shed weight with each generation with this one weighing 50kg lighter than the present one on sale.

New 2015 Audi TT will have the following engine options:

Transmission options include a six speed manual and a six speed S Tronic DSG gearbox. However, before all that, Audi is slated to launch their most affordable A3 sedan in India.