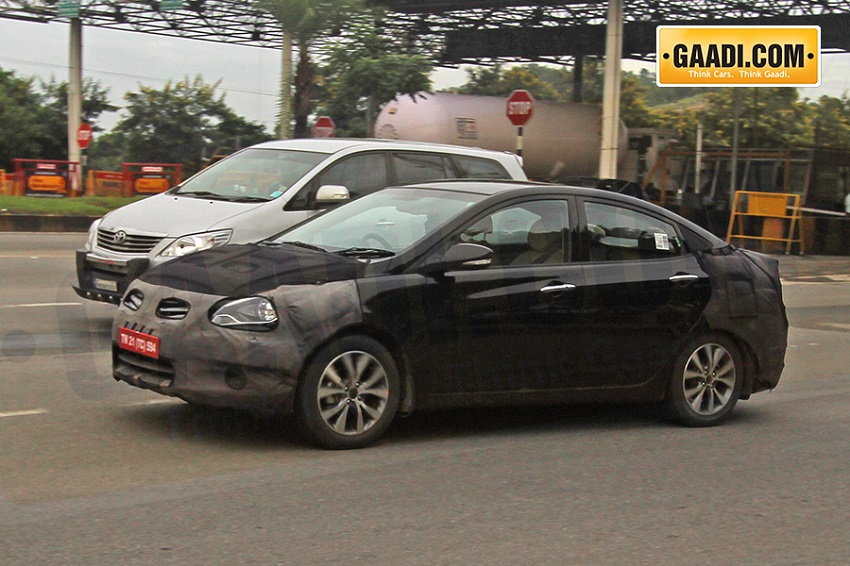 Hyundai was already caught testing their Verna facelift in India last month, confirming that the Koreans are indeed working on refreshing their C-segmenter in order to slug it out against the increased competition of new City, Ciaz and others.

In an update, a clear spyshot of the new Verna has been shared by the folks at Gaadi.com which gives us a few hints on the new design the car will sport. It has been reported that Indian version of the Verna facelift will be the same car that was showcased in Moscow Motor Show, and is sold in few markets under the name ‘Solaris’.

If we notice the hidden test mule here, we can see the snazzy headlamps as well as the slanting horizontal slats of the chrome-laden grille. The air dam and diamond-cut alloys also look very similar.

As per reports, the new Verna will be launched by the first quarter of next year. It clearly appears that Hyundai is expediting its launch looking at the dent in sales by the new City and Ciaz.

City has snatched back its numero uno position from Verna and in style and Ciaz has also been received pretty well. Ciaz is not just bigger than the Verna but is also cheaper, add to that the fact that Maruti still has this huge grip over the generic customer’s mind and commands a huge amount of success in terms of after sales value.

In terms of engine options, do not expect any significant changes. The same 1.4L and 1.6 liter petrol and diesel engines will continue to do duty albeit with a few tweaks. Hyundai may, however, offer a few more features to lure buyers into its showrooms.

So, the fight for supremacy in the C2 sedan segment is just getting hotter by each passing day. It would be interesting to see, if Verna can claw back its position from City with this facelift…

This new Verna was snapped testing along with the upcoming i20 Crossover.