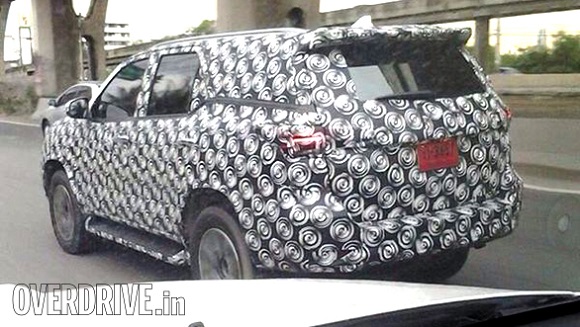 Toyota Fortuner has been India’s largest selling SUV in the 25-30 Lakh price bracket. After getting launched in 2009, Fortuner has constantly been at the top of the sales charts and the company builds it from CKD parts at its Karnataka plant.

The brawny SUV is getting tougher competition each passing day and is touted to get a major facelift in 2016 and the first spy shots of the new car have come up on Overdrive, where we can see a completely camouflaged mule.

Spotted it Thailand, the new car is reportedly built on the Toyota’s New Global Architecture (TNGA) platform which shall also give birth to the new Innova MPVs and Hilux pick-up trucks. The chassis will continue to be a ladder frame, which seems to be the choice of majority of car manufacturers in India when it comes to building SUVs. Though it seems too early to say this but the camouflaged test mule seems to be wider than the present crop of Fortuners. Even its length seems to have gained a few centimeters, possibly! 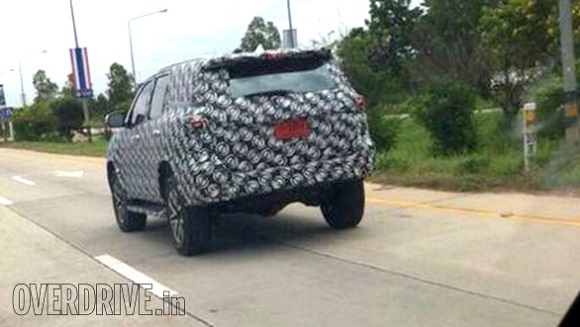 The interiors should also get a major overhaul with more premium features. This would be a major change and a prime boost as the sales of the Fortuner have been hit by the entry versions of the luxury German brands. The engine will again be a 3.0L one but will be a tweaked up version of the present iteration. There are some rumors of a new 3.0L mill as well but we are not confident of Toyota offering that, at least not in India, looking at their attitude when they are stuck at the 1.4L D4D motor for the D-segment Corolla!

Since this new 2016 Fortuner is still sometime away, there is a possibility of Toyota launching the present generation Fortuner with a cheaper entry level variant powered by a 2.5L mill from the Innova. On the other hand, Toyota has already started testing their 2015 Innova in India.

Related: Compact Crossover Based on Toyota Corolla Spotted Testing for the First Time