With each passing day, we are getting closer to Ford Ecosport’s official entry in India and we know the craze is as much as Duster, if not more!

With regular spottings of the compact SUV, we have already garnered a lot of information. The biggest talking point, however, is the pricing of Ecosport which will have the make or break potential. Here we list 4 reasons why Ecosport should be priced sensibly and competitively:

1. Ecosport is sub-4 meters long: Ford has cleared that Indian Ecosport will be sub 4 meters in length. With engines of 1.0L and 1.5L capacities for petrol and diesel respectively, Ecosport will qualify as a ‘Small Car’ in India. This simply means that it will attract lesser 12% excise duties as compared to double for ‘Medium sized cars’ such as Duster and even more for other bigger cars.

Lesser duties should automatically transform into lesser price for Ecosport. When Maruti launched the ‘Small car’ adhering Dzire compact sedan, they reduced the prices by approximately Rs 30,000 on the new car.

Understand our excise duty structure on cars in simple language

2. 80 percent Localization: Back in July Ford revealed that Ecosport will have 80 percent local content. This will be similar to the localization levels in Ford’s VFM Figo. Higher localization means lesser burden on Ford and an open hand for them to price it competitively.

3. Learnings from Fiesta’s debacle: Along with being one of the best cars, New Fiesta is also one of the lowest sellers in its segment. The reason was simple – It was grossly overpriced when it was launched. Ford did try to bring it normal levels and the car now is fairly decently priced but the sales have just failed to pick up. This is a lesson enough for Ford to ensure they do not kill an immensely potent product just because of its pricing. 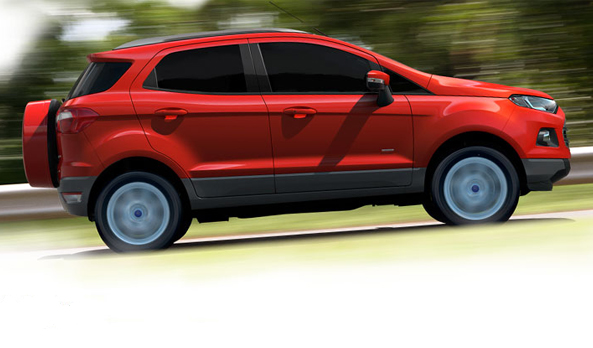 4. Part Sharing with Fiesta: From the extensive set of spy pictures we have shared till now, it becomes apparent that Ecosport would share a lot of parts with the new Fiesta. An all together a new product with completely different parts requires new vendors, extra inventory management, extra resources and new negotiations which result in higher costs. However, if Ford is already getting, say, 100 pedal covers for Fiesta from ABC vendor at a price of Rs 100, they can negotiate and increase the same figure to 300 units (to accommodate Ecosport’s pedals) which they can get for Rs 90 since the bulk quantity has increased for the same product.

Considering all the above points, if Ford can undercut Duster’s pricing significantly, Ecosport is a sureshot winner in the making. Duster starts at Rs 7.49 Lakh ex-showroom Delhi for petrol and Rs 8.39 Lakh for the diesel version.  If Ford can price their petrol engined (either the unconfirmed 1.5L from Fiesta or the confirmed 1.0L Ecoboost) Ecosport at under Rs 7 Lakh and diesel under Rs 8 Lakh ex-showroom Delhi, we might just see a turn of events for the compact SUV crown.

You can check out our latest spyshot capture of Ecosport here.