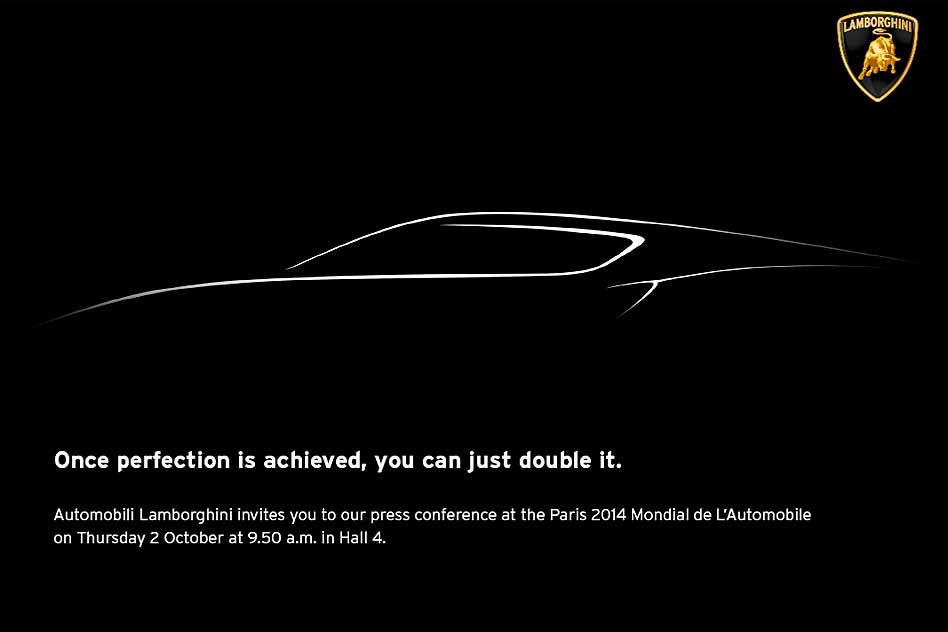 The second day of next month is a national holiday for us in India, but people in Paris would be celebrating an occasion of a different kind. The unveiling of a supercar is certainly not less than a celebration for car fans and if the company’s name is Lamborghini, the sense of  occasion only gets heightened.

So expect nothing short of a gala affair to happen in Italy’s capital on 2nd of October because Lamborghini has chosen the day to unveil a new car, most probably a four-door model, on home turf.

Lamborghini has released a teaser image of the car that just shows a sketch of the car’s silhouette and if one looks at the window outline they can see that this would be an all-new car and not a four-seat version of the Huracan or the Aventador. Moreover, it’s the tag line that that does not need much to be decoded; it says, “Once perfection is achieved, you can just double it”.

You can also make out that it certainly won’t be a four-door like the Estoque concept displayed at the Paris Motor Show in 2008. Had that car gone into production, say, even a year later the Porsche Panamera, which, in fact, had made its debut in 2009, would have had a hard time for sure. The plan to build the Estoque was shelved because the global automobile market was going through a rough patch. Just to let you in to a little bit of Lambo’s four-seat history, the company did make a full-size (but still a two-dour) four-seater, the Espada, from 1968 to 1978 and also a 2+2 Coupe, the Urraco, from 1973-1979, so it’s not that the company is experimenting something new…

And even if it was, now seems to be the right time for such a vehicle and the Sant’Agata firm would not waste an opportunity to make a superfast GT car for a family of four, what with a lot of expensive machinery spotted frequently outside posh supermarkets… It would certainly rub the Bentley Continental GT the wrong way but it’s not something that the parent company wouldn’t have thought about. The four-seater Lambo would have the Ferrari FF in sight primarily and even the four-door Panamera would have something to think about now.

What would power the car is anyone’s guess with the Aventador’s naturally aspirated V12 the last such one for the company. Who knows, Lamborghini might put it in a ‘family’ car before assigning it to the hall of fame.