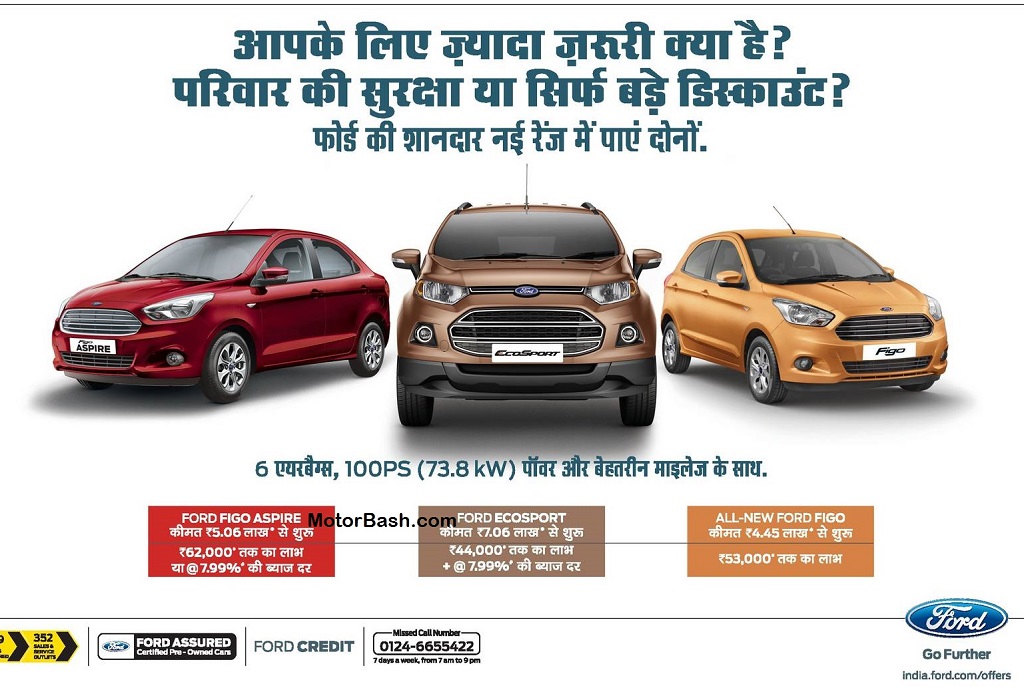 Barely a few months after the launch of its new-gen cars, Ford is in the newspapers advertising and promoting them through various offers and discounts. New Figo, which was launched in September this year is being offered at discounts of Rs 53,000 which are not good signs!

Barely within two months of its existence, if a company starts offering a car at discounts than these are clear signs of the new model not doing as well as expected. Original Figo was a big hit and changed Ford’s fortunes in India only to pass the baton to the EcoSport upon launch.

The new Figo was expected to carry over the good work, however, sales are way lower than i20, Grand i10, Swift and even Baleno and Jazz and we are saying this when generally the initial hype is high.

Things look similar for the Figo Aspire as well. It started on 5K levels but has registered a continuous fall every subsequent month and at 2300 levels for November 2015, things look bleak. Ford is offering discounts of upto Rs 62,000 on their compact sedan which is selling only more than Zest in the prominent compact sedan segment.

Ford’s biggest hit till now, EcoSport, which got a more powerful version in October is also facing the heat from the competition. Though sales are consistent at around 3k to 4k levels, you can get offers upto Rs 44,000. These offers will be broken up into different parts and may vary from city to city.

It is still too early to predict anything but we must exclaim that Ford definitely missed out by not offering the 1.0 Liter EcoBoost petrol engine on the Figo twins which would have made them the decided choices in the petrol car segment respectively. They will have to make the tiny turbocharged motor more common now…

1 thought on “Barely Within 4 Months New Figo & Aspire on Discounts of Upto 62K; Offers on EcoSport as Well”