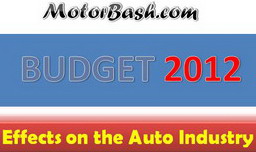 One of the most prominent news among many positive and negative impacts of Budget 2012 has to be this: NO EXTRA TAXATION ON DIESEL VEHICLES! With the shifting balance of an auto buyer to Diesel, it has caused a lot of flatter among the think tanks.

For many cars which have both the fuel variants, it has turned to 70-80 percent in favor of diesels. There was a big speculation that Government would add a hefty tax to diesel vehicles to curb this imbalance which has been caused since the petrol fuel was deregulated.

The biggest and immediate impact could be seen in February 2012 auto sales which rose to an all time high in fears of a speculated huge extra taxation on Diesel vehicles.

Even after this decision, there have been murmurs on how would the government turn the tables to equate the shifting paradigm to diesels and lowering petrol car sales. Well, if considered from a bigger viewpoint, there doesn’t seem to be as big an issue basically as personal vehicles do not constitute any major consumption of diesel fuel in India.

Nonetheless, if you have been considering a diesel buy, you can be rest assured and go for your favorite diesel at no extra ‘diesel speculated’ taxation.

The grass is not as green as it seems, you can continue reading about other impacts in our forthcoming articles!