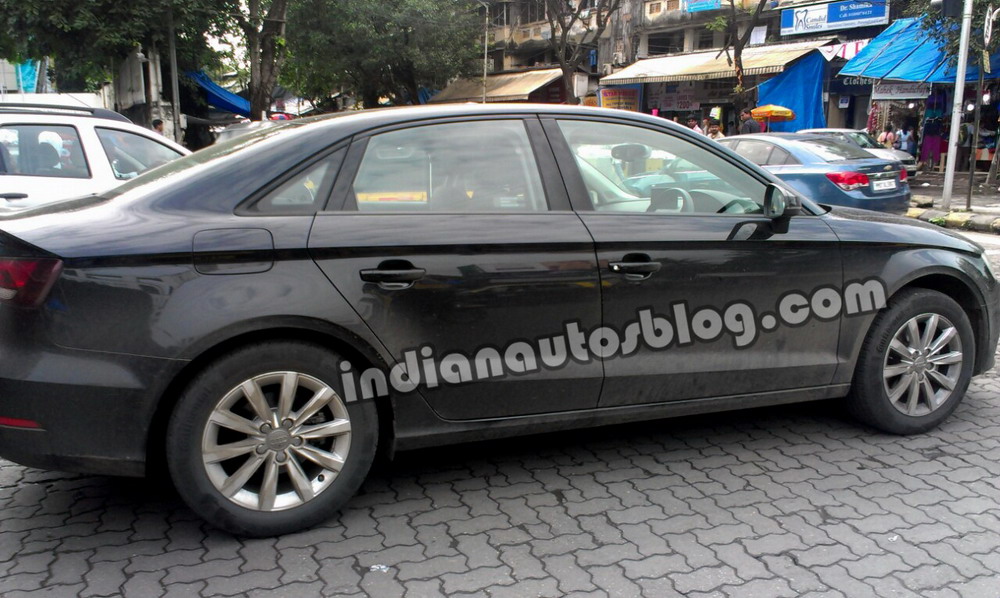 An alert Indianautosblog.com reader has photographed Audi’s A3 test mule in Vile park, Mumbai without any heavy camouflaging.

This car is probably the company’s test prototype which is being used to gauge and assess its performance in Indian conditions. Hence, do not be surprised if minor changes such as raised suspensions or different profile tires are seen on the final product.

Casual viewers might mistake it for the A4 saloon but this, in fact, is the same Audi A3 that was showcased at the 2013 Auto Shanghai where it made its public debut.

The A3 is a typically under-stated-looking Audi offering and competes with the Mercedes CLA (A-Class based sedan) in European markets where both models are already on sale. Could we be witnessing a similar fist-fight on Indian roads soon?

With the A3 being based on the MQB platform, which is the same as the 2013 Skoda Octavia, the expected engine options are the 1.4 TFSI in two states of tune of 125bhp and 140bhp with both 6-speed manual and S-Tronic auto transmissions. The top-of-the-range 1.8 TFSI petrol churning out 180bhp is less likely to be offered here in India. Diesel lovers will, expectedly, only have the 2.0 TDI producing 150bhp via a 6-speed manual.

We have seen that Audi is getting really interested in the market, with new launches and aggressive prices. And based on the same, we can expect a luring price tag somewhere around the 25-27 lakh region when it goes on sale sometime in 2014.