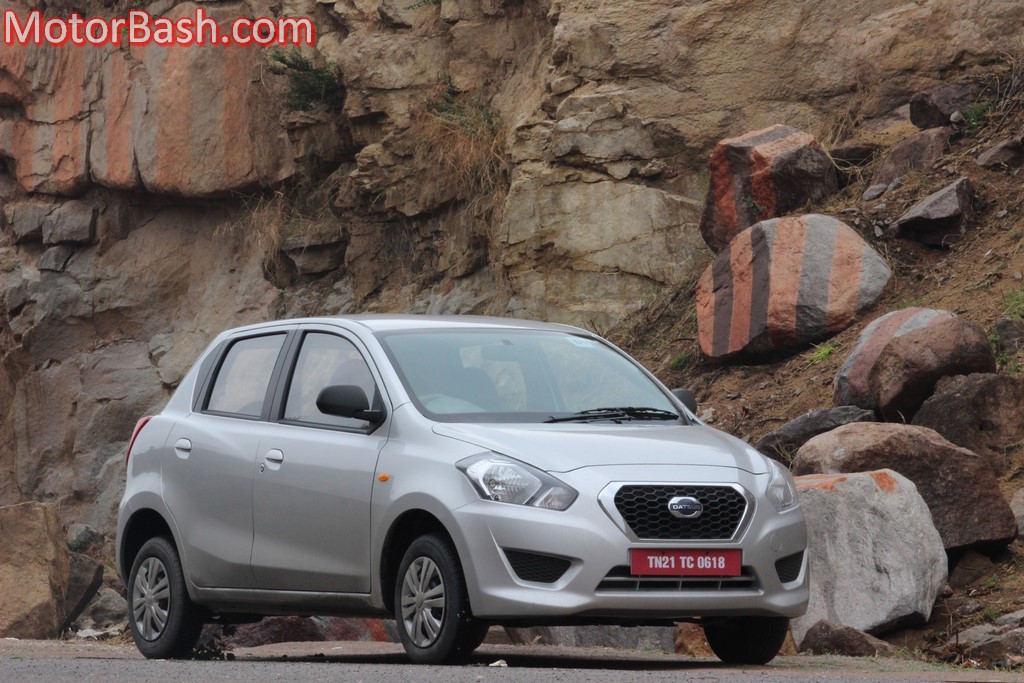 The automobile market in India can prove to be very challenging for car companies when it comes to entry-level hatchbacks. Majority of buyers in this segment would be buying their first car and there are more apprehensions running through their minds than one can imagine. Factors like the brand’s after sales support, cost and availability of spares in the long term, brand’s and car’s perceived image, etc., are as much important as the car’s price, fuel efficiency, design, features, power, and reliability. It’s not for nothing that Chevrolet provides a zillion-miles-warranty for its Spark, though it’s another matter altogether why its sales still ain’t a patch on the Marutis’ and Hyundais’ from the segment.

I am sure Datsun would have done its homework and even if it didn’t the company officials would have known by now that not many in India know about the brand or its pedigree. And that’s a shame really as Datsun as a car maker goes as far back as 1914 and has been a part of Nissan since 1934. Yes, Datsun is older than Nissan and the latter became an automobile manufacturer only when the former came under it in 1934. So, now you know… 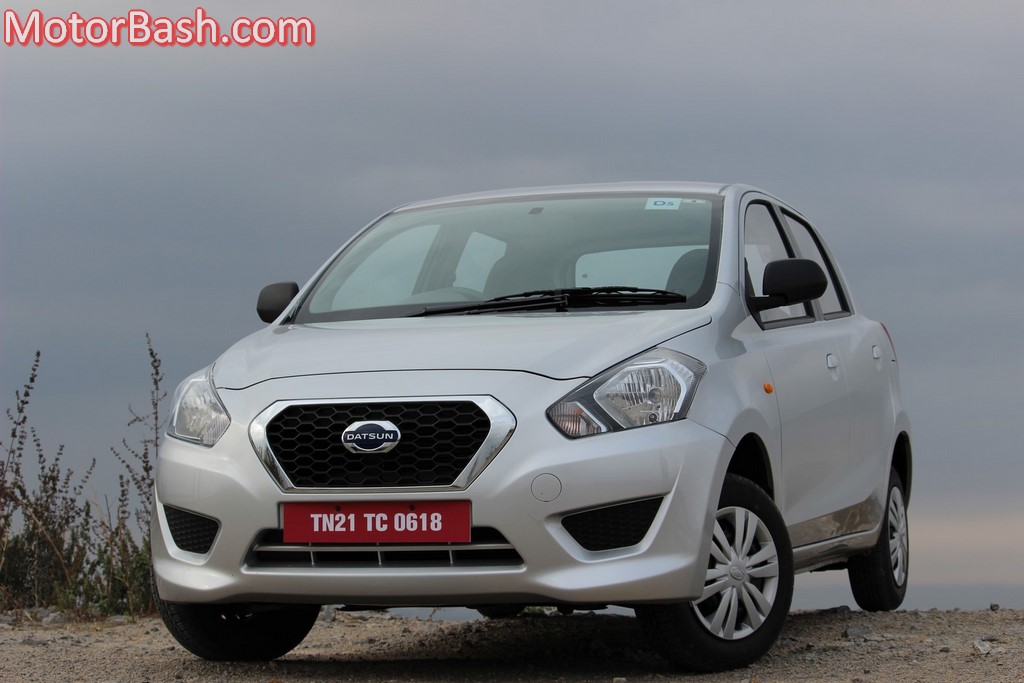 Datsun launched its first hatchback in India, the GO, in April last year and followed it up with the GO+ MPV this year, however, both these vehicles, despite their low sticker prices, are still not a common sight on our roads. Now, the Kwid looks all set to spoil the Alto twins’ party, but since Renault is perhaps consulting a lazy astrologer for the launch date, we thought of reviewing another big small car for you, and also to see for ourselves whether this Datsun deserves to sell more…

Calling Datsun GO a small car would be a misnomer. I say that because other than being the biggest in segment it is also much longer and wider than even the Wagon R! For the record, the Maruti is 1,475 mm wide and 3,599 long. Compare that with the Datsun’s length and width figures, which stand at 3, 785 mm and 1,635 mm, respectively, you know that the K10, Spark, and Eon don’t stand a chance in the pose-down round. Even the GO’s wheelbase at 2,450 mm is 50 mm better than the Wagon R’s! 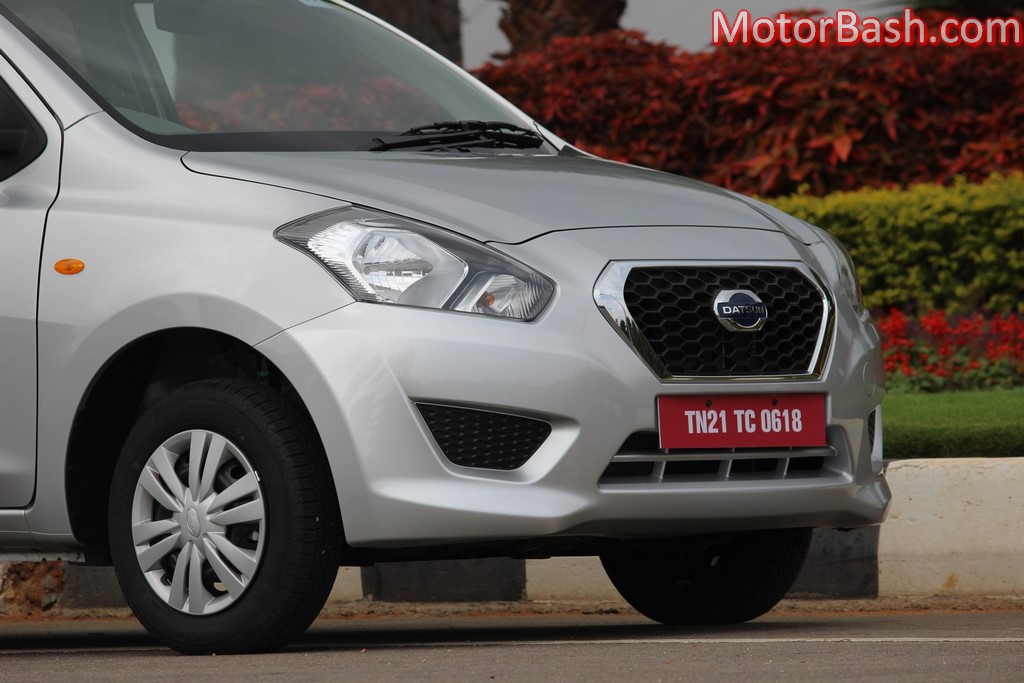 The styling too comes as a lot mature in the company of so many cute, chirpy, and quirky looking hatchbacks. I like the muscular front-end – that huge hexagonal grille, big headlamps, and the well-sculpted front bumper that neatly integrates into the slightly flared front wheel fenders ensure that this hatchback won’t suffer from an identity crisis anytime soon. 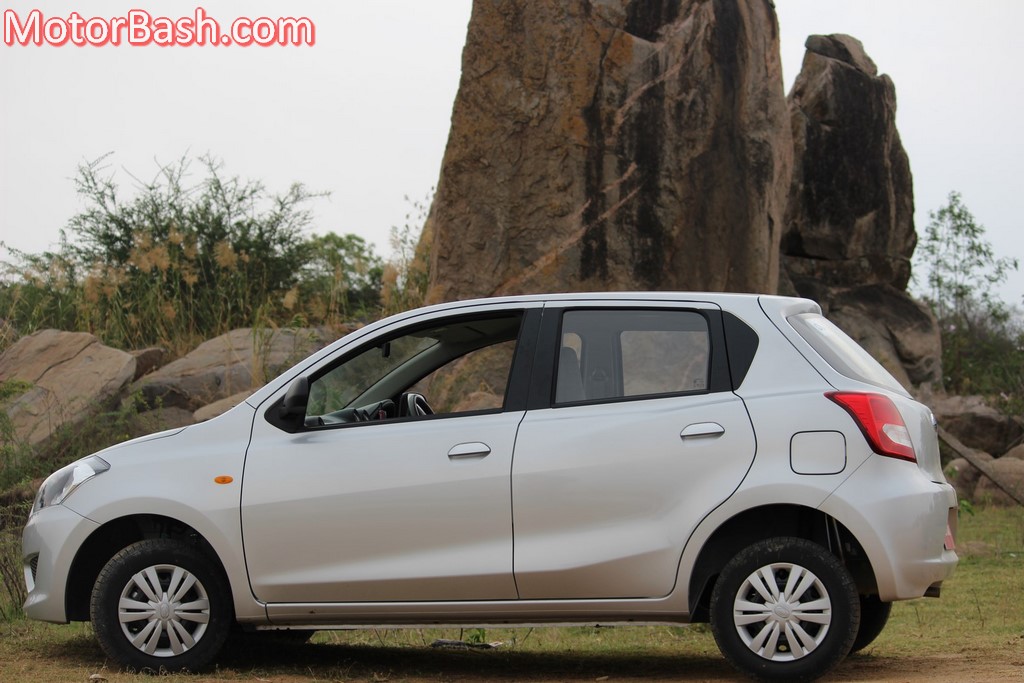 In profile, you will notice that the window frames are blacked out and so is the thick C-pillar, albeit partially. Also, the well-defined belt line that starts from the corner of the swept-back headlamps, and merges neatly into the outline of the tail-lamps, is complemented by two sharp creases on the sides – one starts from the front fender and ends near the rear door handle while the other begins at the base of the front door and extends up to the rear wheel arch. But the moment your eyes get to that wheel arch, you will see that the GO looks hopelessly under-tyred and I also seriously can’t come to grips with that horrible choice of rubber (our car came equipped with ‘Strada’ brand). Anyway, moving on to the rear brings some relief to the eyes again as the design is thankfully uncluttered with the windscreen getting an upswept arced base and the nicely placed Datsun logo. 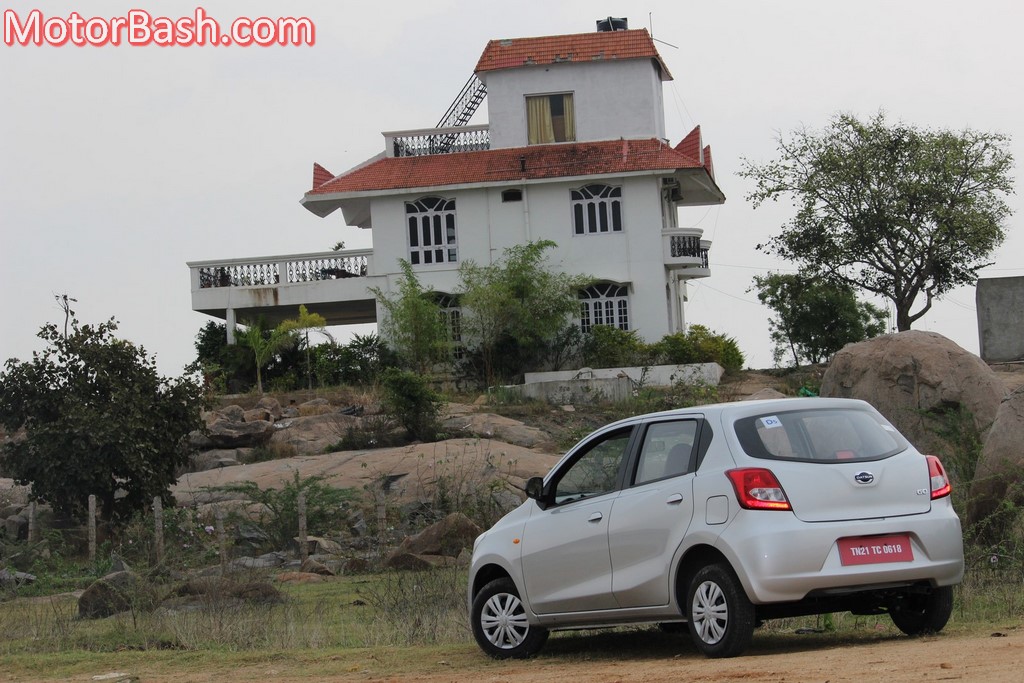 The GO won’t win any beauty pageants (none of the cars in its segment would either, by the way…), though it would most certainly wear the Ms. Confident sash in such events. It is the only car in its class, along with Renault’s latest, that has good road-presence.

As it can be guessed from the bigger dimensions, Datsun GO offers the roomiest cabin in its segment. It’s a proper five seater, which is something you can’t say about some of the cars from even a segment above. And it’s not just the room for passengers that’s great; the 265-litre boot is second only to Kwid’s 300-litre cave, and much better than wallet-sized boots of the competition (Swift comes with a 210 liter boot space). The lack of a parcel tray is disappointing, and so is the lack of a keylock in the boot. Yes, that means you can only open the rear hatch via the internal release placed next to the driver’s seat. 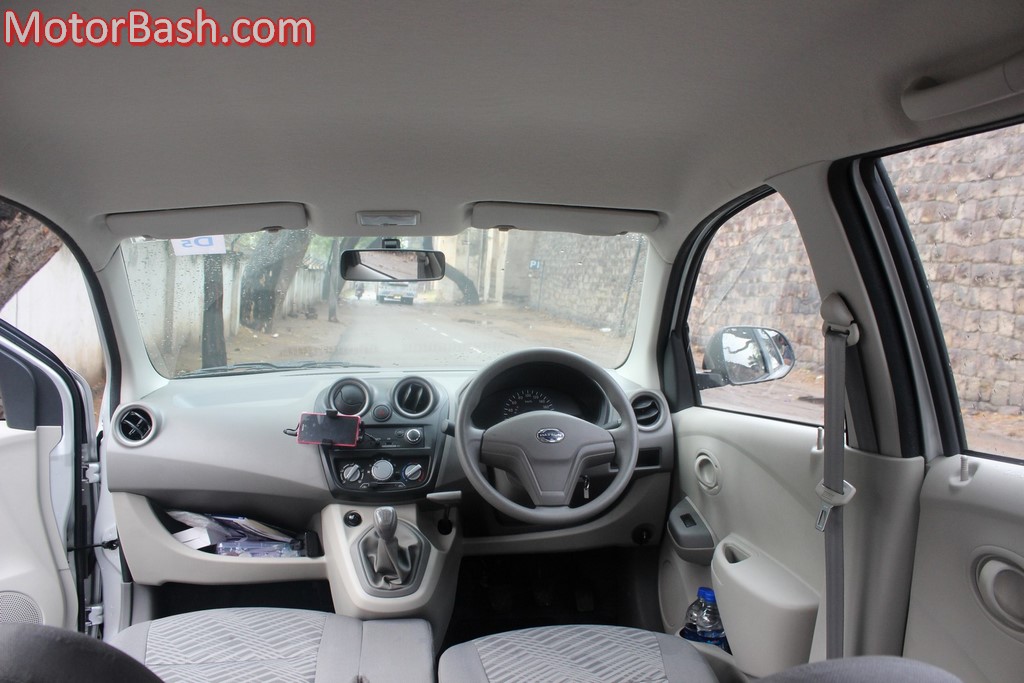 The steering wheel and dashboard are set high and that may pose visibility problems for shorter drivers. The driver seat is not adjustable for height (which is expected) and the upholstery will remind you that the GO is built to a cost, but the seats are more supportive than one would imagine.

Real tall drivers and occupants may find the under-thigh support lacking; for everyone else the front seats would prove  to be comfortable enough, but just, specially the ones at the rear! I am certain that Datsun engineers, while researching, must have seen a lot of those brown and rickety ‘phat phat sewa’ vehicles (Mahindra Armadas) in which you will normally see 4-6 people sitting on the front bench including the driver. At times, you would not know who’s driving! It could be the second one from the door… Anyway, I gave that reference because the GO comes with peculiar “connected seats” where the seat squab and backrest of the passenger seat is extended to meet the driver’s seat to form a kind of bench. 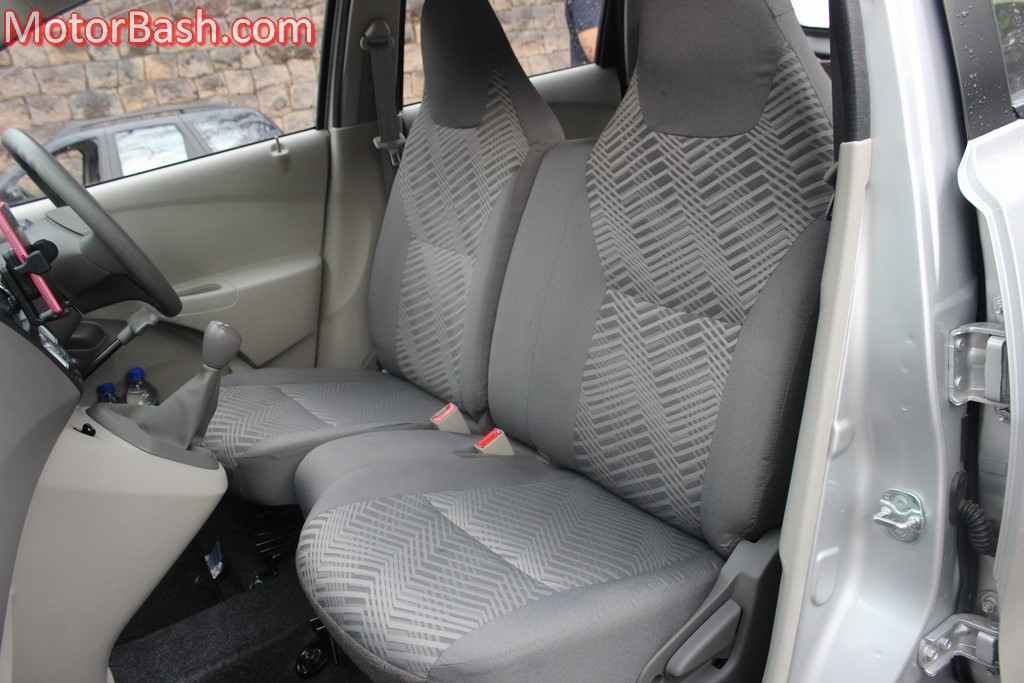 The aforementioned engineers say that it’s for the driver and/or passenger to keep stuff like handbags, etc. The seat style also means that the GO does not get a conventional handbrake. It gets a dash-mounted pull-type handbrake, the operation of which you would need to master unless you have driven old jeeps or the relatively recent Chevrolet Tavera and Toyota Qualis. The dashboard-design can best be described as tolerable in terms of quality but it comes with fairly decent storage space. There is a large shelf under the steering column and there is a carving on top of the dash too. The glovebox is huge but it does not get a lid and that’s something that is really not acceptable. Come on Datsun, I don’t want to opt for that storage box, that you offer as an extra, under the front passenger seat (only on the top models)! 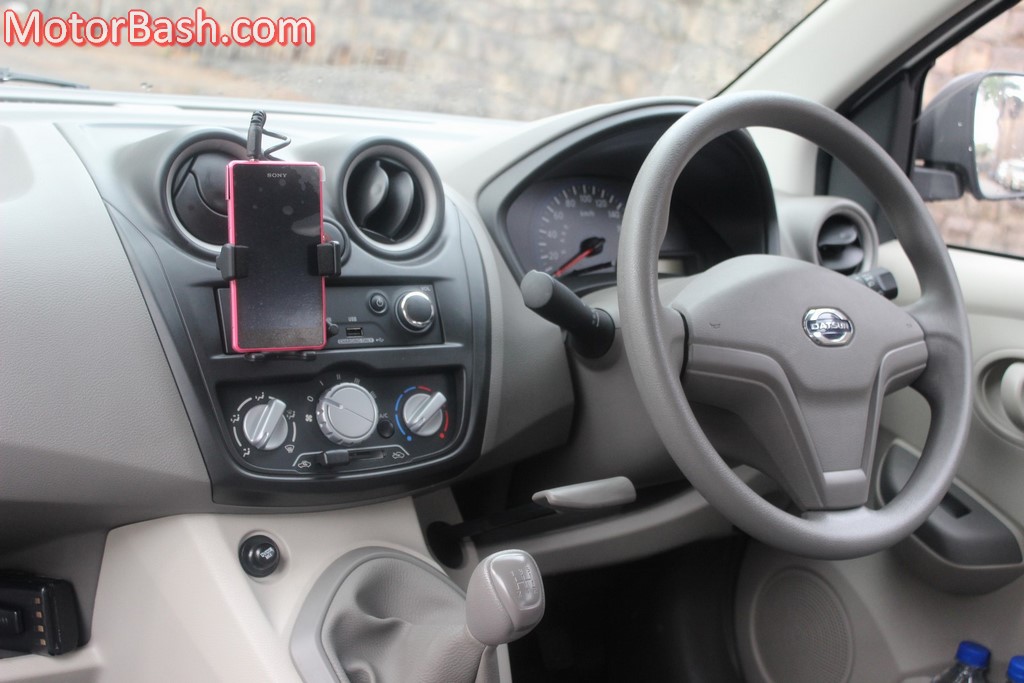 Also, I don’t mind rolling down the window to open or fold the wing mirror (it’s not internally adjustable) but please don’t expect me to take the pain of reaching out to the passenger door whenever I want to open the left window to tell the pretty damsel at the bus stop that I am indeed headed in her direction (no pun intended). Yes, the top-end variant gets power windows up front but the driver has a power window button for his window only. So if that lady does allow you to drop her home, you won’t get the chance to showcase your best chivalrous behaviour as she will have to roll her window down by herself if she has to buy a Cornetto…

Another appalling miss is the fact that air-conditioning comes standard only in the top two ‘A’ and ‘T’ variants! The base ‘D’ and ‘D1’ make do with only a heater. Also, though the air-conditioner is efficient, I felt that no gap between the front seats was blocking the flow of air to the rear… Non-retractable rear seat belts which are spilled all over the seat are also one of the not-so-pleasing sights. 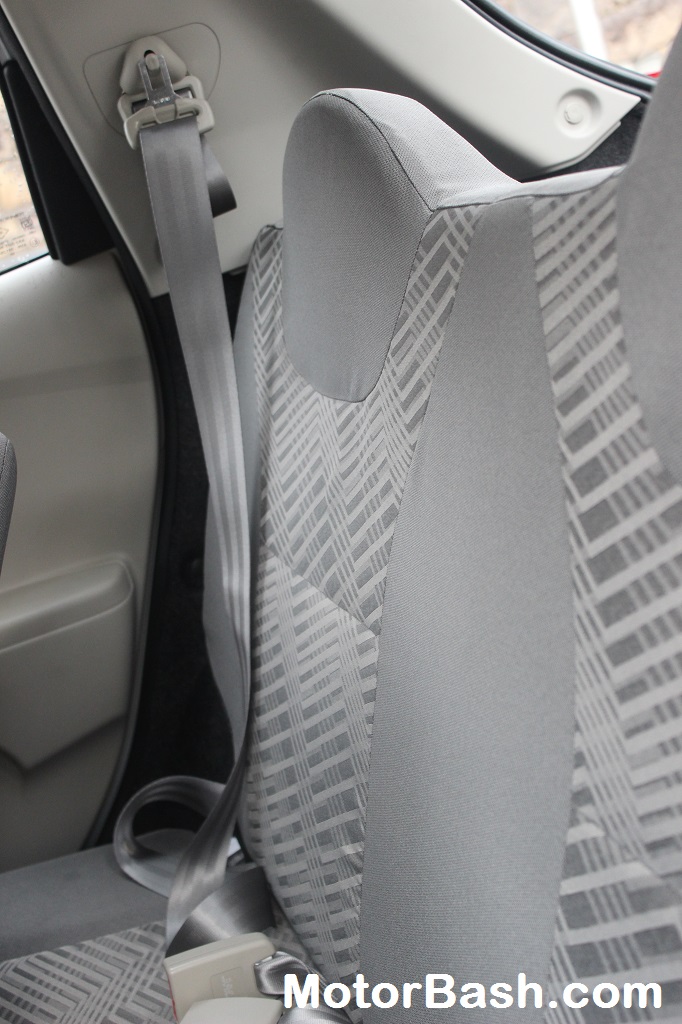 With this we come to the real deal breaker – Datsun for some senseless reason offers the power steering only on the top T  (and the new T(O)) trim which surprisingly means that you do not get it even on the mid ‘A’ variant! Though they claim that there is a minor difference between their mechanical steering and the PS but I would not want to drive such a big car without the assistance! 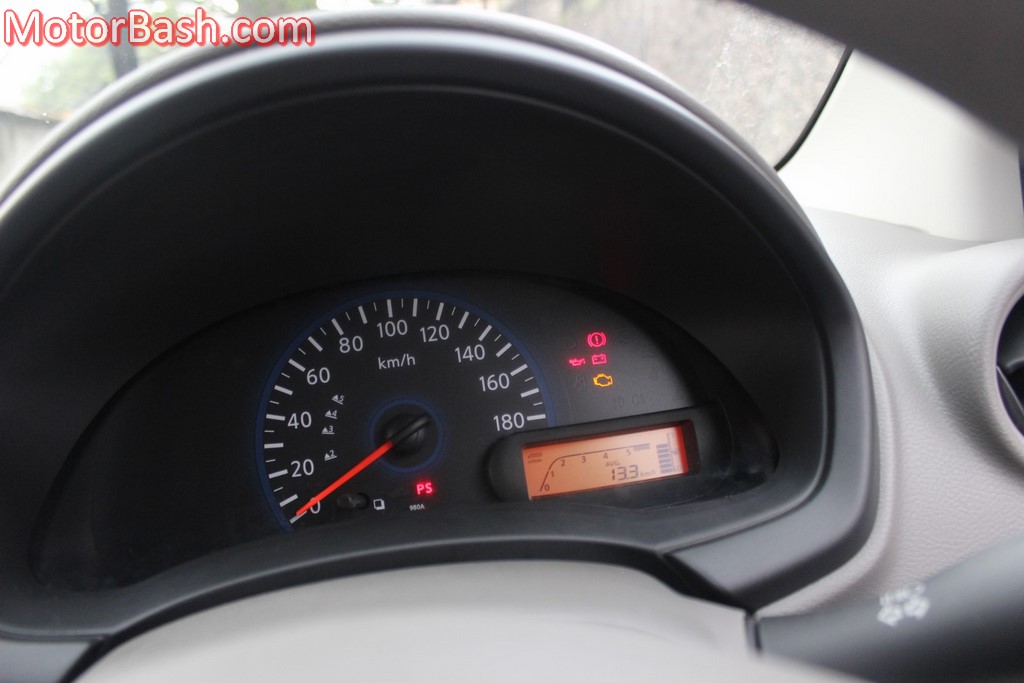 What comes as a pleasant surprise though is the fact that not only is the comprehensive trip computer a segment-first in the GO, it comes as standard across all the variants and so do the “follow me home” lights! There is no music system or even a radio in any variant, and the only saving grace is the Mobile Docking Station supplied in the top T variant.  Okay, it is just a fancy word for a basic device that lets you connect your mobile phone or a portable music player via Aux-in to the pair of front speakers.

This is where the GO redeems itself. The 1.2-litre three-cylinder petrol mill of the Micra does duty under the GO’s bonnet and its 68 PS, which comes in at 5,000 rpm, moves the 788 kg car rather briskly. The engine churns out 104 Nm of torque at 4,000 rpm and helps the GO dismiss the 0-100 km/h sprint in about 15 seconds, which is quick for the class, but the K10 is slightly quicker. Moving away from numbers, the Datsun Go is one of the not many cars here, which feels ‘good to drive’! 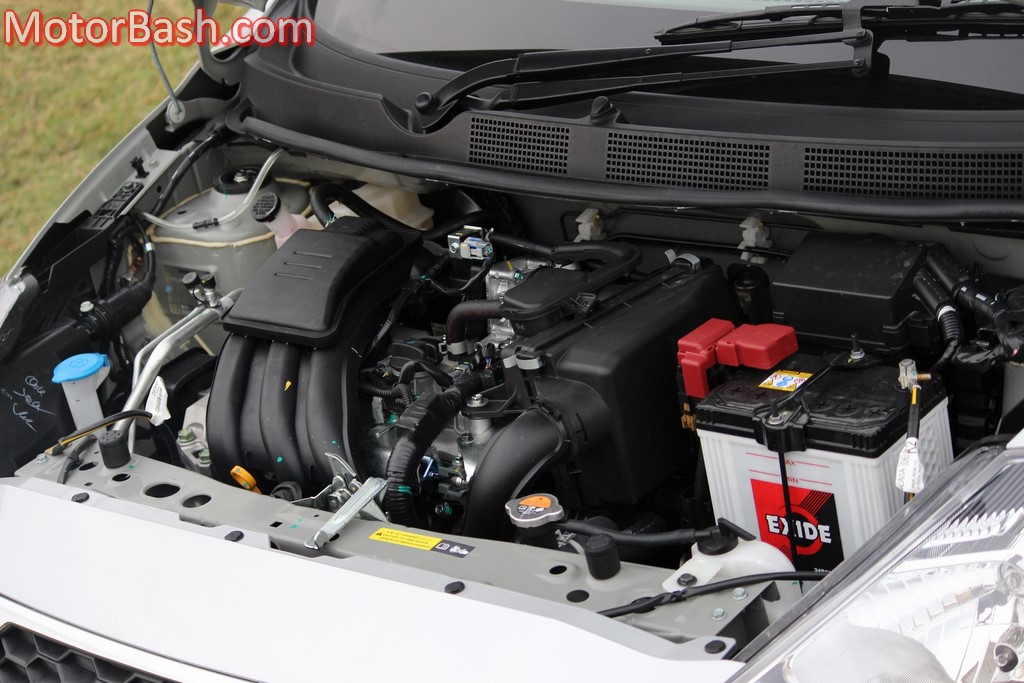 The gearbox of the GO, for cost reasons, is not the same Renault-sourced transmission as in the Micra. It’s an old five-speed unit that is not the most refined ‘box out there. There is gearbox whine at a lot of times but the gearshift quality is good. Moreover, the clutch is light but progressive in feel. The bigger capacity of the engine endows the GO with best-in-class true top speed of a shade less than 160 km/h. We actually managed to get quite close to that figure on the speedo, just when a dog considered it the best time to cross the 8 lane road!

And I am happy to report here that this car’s straight-line stability, even with the aforementioned crappy tyres, is fantastic – just imagine the kind of grip this car will have once you upgrade to better rubber, which you should! The steering, which is light in city traffic, weighs up nicely at highway speeds, which is again something that you seldom hear for a vehicle of this class. The long-travel suspension soaks up most of the road’s irregularities while the 170 mm ground clearance keeps you worry-free on really bad roads. 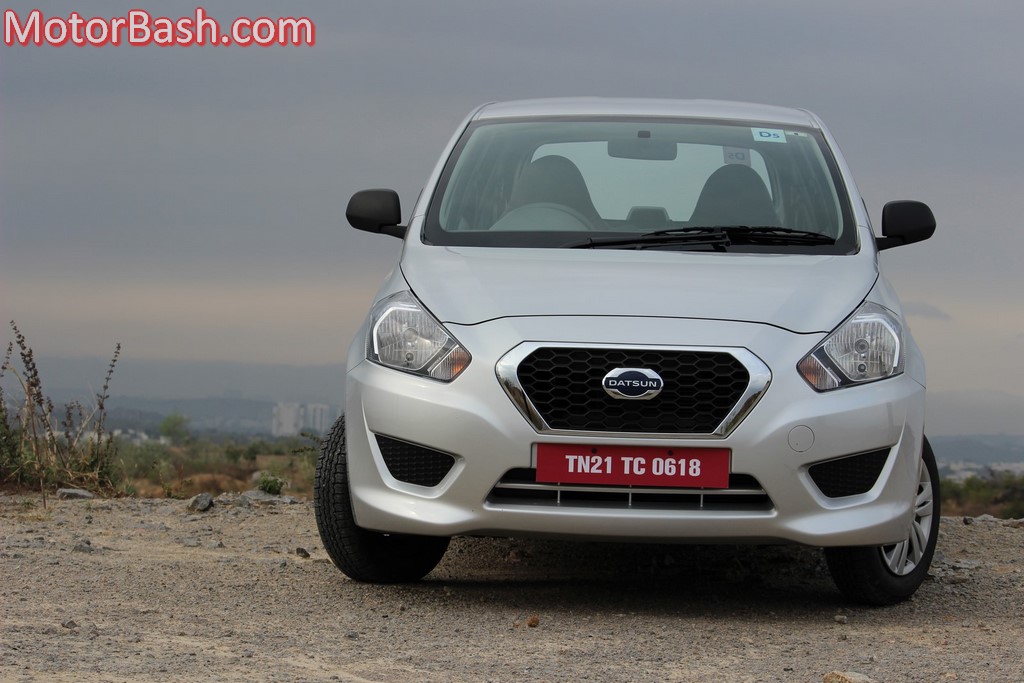 Now, fuel efficiency, quite frankly, is the make or break deal in this segment, and considering the size of the motor, we did not expect it to be a miser. Inside cities and under heavy driving, the car returned about 13 km/l whereas on the highways we could extract about 16-17 km/l. As compared to the 20.63 ARAI certified rating figures, these are no ground breaking numbers but as we said, it more than makes up for this with its responsive engine. 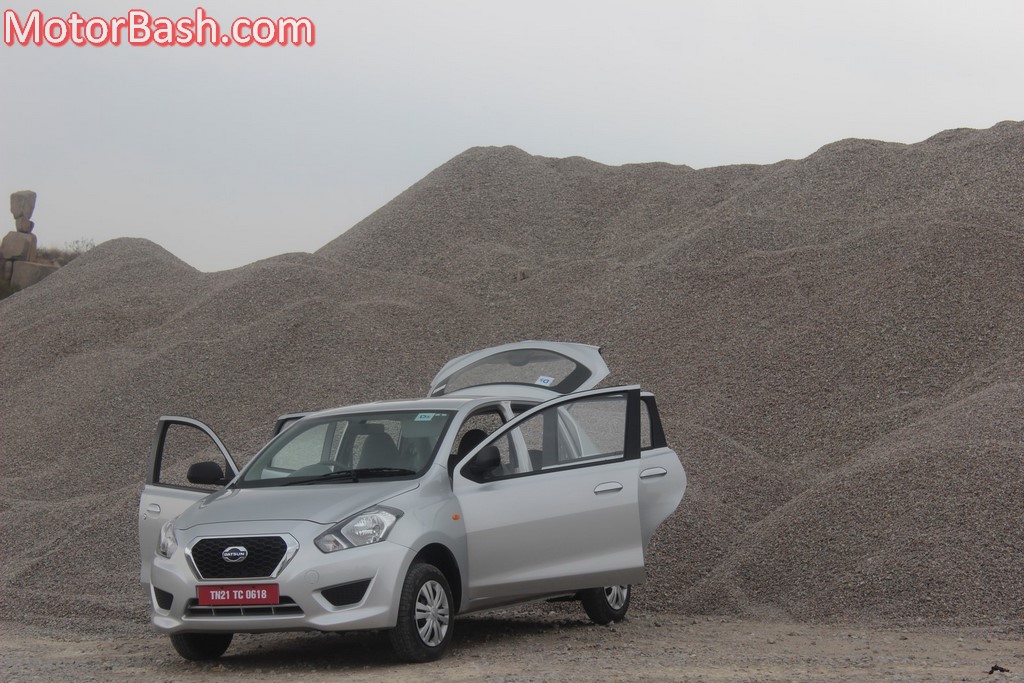 Well, the Datsun GO certainly does a lot of things better than ALL in its segment while it definitely also makes you feel that you are in a low-cost car. The company has tried to address that by adding a new NXT variant last month that does make things somewhat livelier inside the cabin. They have also added a new airbag (T(O)) variant to the lineup which adds a driver side airbag.

If you are someone who is not from the herd and can look past the lacklustre interiors, quirky ergonomics, and zilch equipment levels, then the 1,200 cc engine, best-in-class overall performance and in-cabin space coupled with distinctive styling and decent fuel efficiency make for a superb entry-level option that is hard to beat at this price point (INR 3,23,542 — 4,19,912).