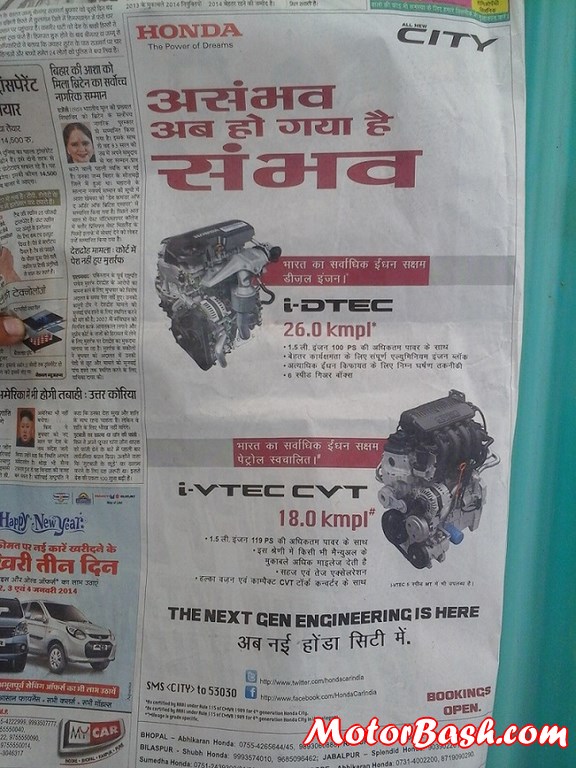 Honda City has already started on a positive note and it can be safely said that it has stuck the right chord with the buyers with various thousand reported bookings.

In order to build the momentum, Honda has started promoting the car (more specifically the engines on the car) and a big such advertisement was posted in a local newspaper (Dainik Bhaskar) in Bhopal.

It clearly gets revealed that Honda will emphasize completely on the fuel efficiency of the car. As the advertisement clearly highlights, the new Honda City produces country’s best 26kmpl ARAI rated fuel efficiency from its 1.5L i-DTEC diesel engine. The petrol 1.5L i-VTEC City returns 18.0kmpl with the CVT Automatic gearbox. On the manual, these figures are interestingly lesser at 17.8kmpl (not mentioned in the advertisement). The advertisement also lists ‘Bookings Open’ ticker at the bottom.

Point to note is that there is not even a single pic of the car in the complete advertisement.

We are a wee bit disappointed at how Honda has taken the new City considering that it is a more premium product and we expected more power and torque from the motor. As we have said earlier, with more power on tap and even with an ARAI certified fuel efficiency of 22kmpl the response to the car would have been even better.

City diesel appears terribly underpowered (more appropriately under-torqued) as compared to the segment leaders like Vento and Verna (More Details). We are hopeful of a real luring price tag from Honda to justify this deficit which will be announced on the 7th of this month.