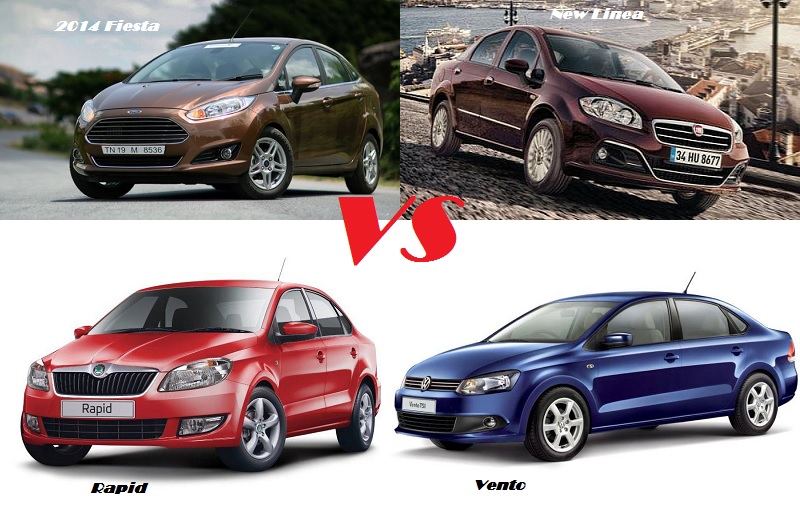 The diesel powered mid-size sedan segment is not just about the Verna and the City. Players like Skoda Rapid and Volkswagen Vento siblings also keep the segment ticking. And then we have the new Fiat Linea and the Maruti Suzuki SX4 which also manage to interest some specific group of customers.

The new Fiat Linea is one of the classiest looking sedans available in India and the recent facelift, with changes to the exteriors and interiors had made the car look elegant and more acceptable. It is also the longest car in its class. The Volkswagen Vento and the Skoda Rapid are basically the same cars rebadged and sold under two brands.

Both of these cars are due for an update in the near future. The Maruti Suzuki SX4 has not been doing well off late and Maruti has stopped production of the car. It is to be replaced by the very interesting Ciaz soon.

But how do these fare against the new Ford Fiesta? Here is a quick compare to give you a brief idea about these cars:

Fiesta also has the smallest wheelbase, which further reflects its lack of space specially at the rear. It also comes with the lowest fuel tank capacity as well as rear boot space. However, it does come with meaty 15 inch tyres along with standard airbags on all variants.

But where the tide turns around are the fuel efficiency figures and aggressive prices. Fiesta is the most fuel efficient car in this comparo, significantly outclassing all others and it is only second to City’s 26kmpl. New Fiesta also is the most affordable C2 segment car which you can buy at this point. It significantly undercuts all other rivals in its segment. Even the current top of the line Titanium is the cheapest top variant among all other cars.

Though it gets the same diesel motor which is underpowered by segment standards but clearly, Ford has played a masterstroke by working on two of the most important parameters which customers consider today – fuel efficiency and price.