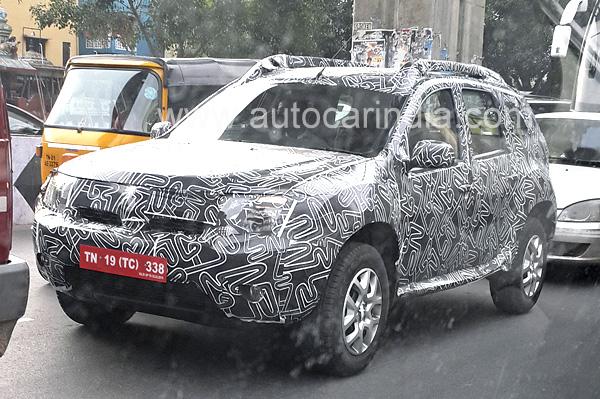 Renault Duster was the best seller in its segment till the newbies – Creta, S-Cross came in and ever since then things have been sliding big time! It reached its lowest sales volume this July with just 1,005 units rolling out of its dealerships in the country. With heavy discounts available in the present version (also an opportunity to win a trip to Gir!) a facelift was kind of expected…

MotorBash broke the first story back in June that the company is working on a mid-life update for Duster to bring it back into contention, following which on-road spyshots surfaced a few times. Latest spy pics by an Autocar reader, however, reveal the front of the compact SUV for the first time.

This clears that there will be minor niptucks upfront as well with new grille, headlamps and revised bumper as well.

The head lamps will hopefully get projectors, a much awaited feature which should trickle down to the facelift. The heavily camouflaged test mule is running new alloy wheels which look fresh and contemporary. The interiors, which have been a major concern, are expected to be getting a major makeover along with a list of new feature additions.

The engines though are expected to remain the same 1.6 litre petrol and 1.5 litre diesel with the oil mill hopefully getting slight tuning for more power and efficiency. Renault, as we understand, is planning for an early 2016 launch.