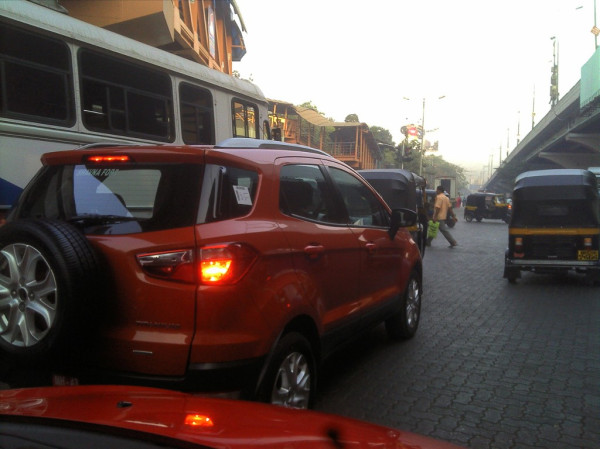 The year of 2013 started in anticipation of the much awaited launch of Ford Ecosport. There is a huge bunch of people who have held back their car purchase waiting for Ford to launch their Ecosport.

Ford is also not confirming any dates but its test mules have been spotted almost every other day. But the following pic of Ecosport talks a lot and clears many things at once. The following Ecosport is a dealer car and NOT a test mule which we have been used to seeing.

The car belongs to Bhavna Ford, an authorized Ford Mumbai Dealer with a (temporary) registration of Maharashtra state. Ecosport’s test mules had TN (Tamil Nadu) registration plates since Ford has its manufacturing plant in that state. This appears to be the top of the line Petrol model with the famed 1.L Ecoboost engine.

Now, this also confirms that Ecosport has started arriving in dealerships and it will not be too long before we will receive an email of an official announcement date. Our guess is a March launch with deliveries commencing from the following month. We hear, a few dealers have already started taking bookings for Ecosport but unofficially, since Ford has still not opened the bookings. For all of you who have been waiting anxiously for the Ecosport, looks like it is finally here and you will probably be able to lay your hands on your car sooner.

1 thought on “Ford Ecosport is Coming Very Soon; Here is the Roaming Proof of it!”