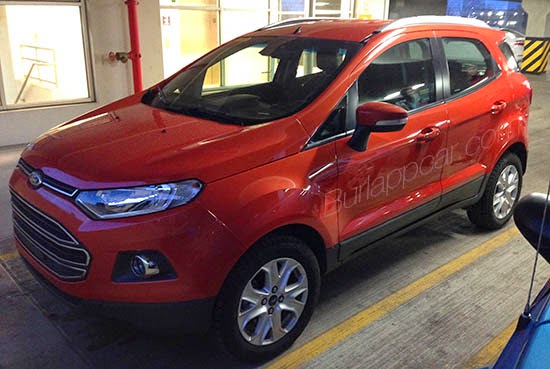 Though not really a small car market, Ford has started testing its ‘mini’ EcoSport in America. This comes as a bold move by Ford considering that Americans really want space when they talk and mean ‘SUVs’!

There have been various hints coming from Ford about EcoSport’s possible launch in the world’s largest car market, USA and with this new spyshot coming from burlappcar.com, it almost gets certain that the plans are already laid!

This comes in the wake of Chevrolet reconsidering its decision of NOT launching their Trax in US. From the latest reports, the small Chevy will finally be launched in America sometime early 2015 (Report here). Apart from that, US will also get mini SUVs/Crossovers like the new Jeep Renegade and Honda Vezel which is specifically named as ‘HRV’ for the American market.

And it would be a tough challenge EcoSport will have to face considering that it is the smallest of this lot! Picking up a fight against these compact SUVs will not be as easy as it was for them in India!

America, which has traditionally loved larger cars, has slowly, but steadily, started finding a taste for compact cars. The Nissan Juke being a great success story is a welcome reference.

The beauty of compact SUVs is the fact that they are small, yet have a very impressive stance and can be mated to very fuel efficient motors. It is possible that Ford may import the EcoSport from Brazil or even India.

America will get the 1.0L Turbocharged EcoBoost petrol engine which churns out 125PS of power output and 170Nm of torque. We were mighty impressed by the car when we had tested it last year in Goa. It remains a question whether 16 inch alloy wheels, ground clearance of 200mm, those bulging wheel arches and the compact yet aggressive looks manage to impress the Americans!

American Ford EcoSport would most probably look exactly the same as its Indian model, albeit with a few more safety features to qualify for the strict American safety regulations.