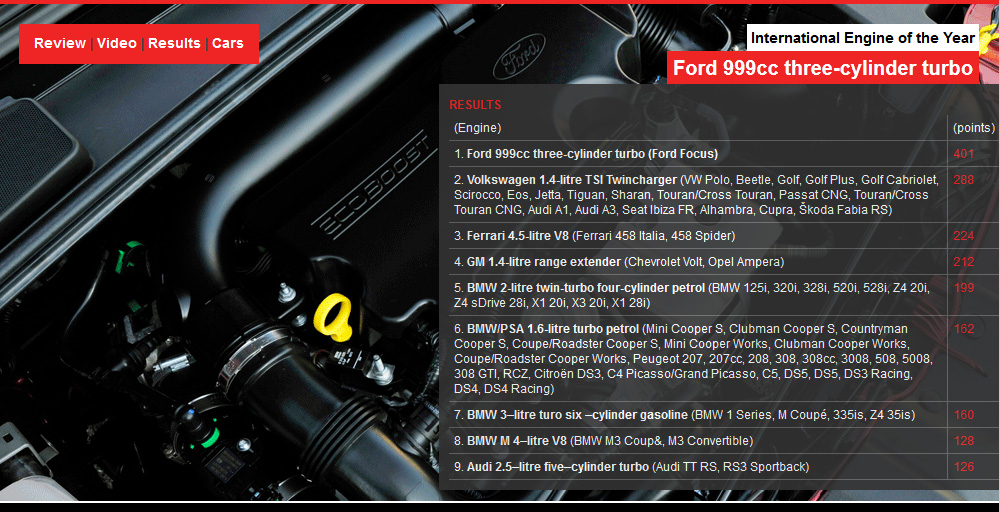 Much has already been talked about the efficiency of Ford’s tiny 1.0 liter EcoBoost engine but that doesn’t stop it from receiving awards all over the globe. The 3 cylinder mill has bagged the 2012 International Engine of the year award.

Dean Slanvich, chairman of the International Engine of the year awards and editor of Engine Technology International magazine said, “This is a fitting victory for a truly remarkable engine. For a three-cylinder to power a vehicle like the Ford Focus with such ease proves that the future is very, very bright for the internal combustion engine. Power, response and very good real-world fuel consumption figures are just the tip of the iceberg when it comes to this engine and what it offers drivers today. Well done, Ford!”

This is the first time Ford has received the International Engine of the year award since the last 13 years these awards have been getting conducted. Ford’s EcoBoost also received the highest score ever of 401 points. It has beaten last year’s winner Fiat’s 0.9L TwinAir engine. EcoSport also bagged “Best New Engine” award as well as the “Best Engine Under 1.0 Liter” awards. Ford’s 999cc 3 cylinder turbo petrol engine would power the EcoSport first in India. This engine, although being small, is regarded equivalent to a bigger engine and at the same time it is very fuel efficient.

1 thought on “Ford’s 1.0L EcoBoost is the International Engine of the Year”