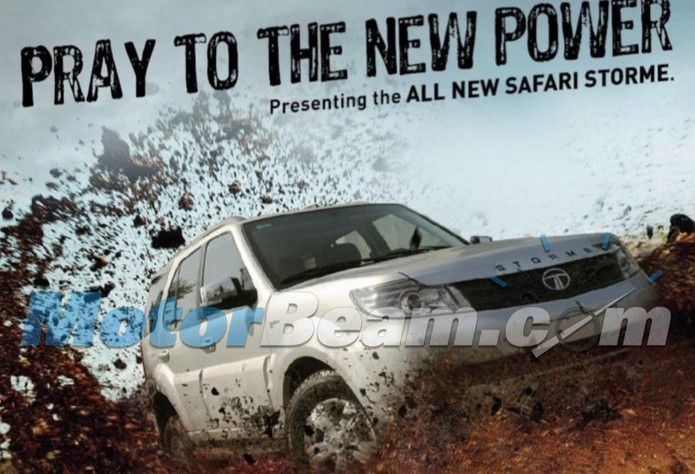 The whole might of Tata lovers and haters are waiting for the Safari Storme facelift to come with a renewed interest with bettered quality, features and more importantly the 400Nm diesel engine, specially when it has been spotted on test many a times in the past. After Zest and Bolt, we thought the new Tata has some serious plans to reinvent their ‘Safari’ brand but what we see here is something which doesn’t really make sense, at least to us!

As per this brochure leaked by the folks at MotorBeam, the 2015 Safari Storme facelift gets the same 2.2 litre VARICOR engine which produces a bumped up 150 PS of maximum power at 4,000 rpm which is 10 PS more than the outgoing version. 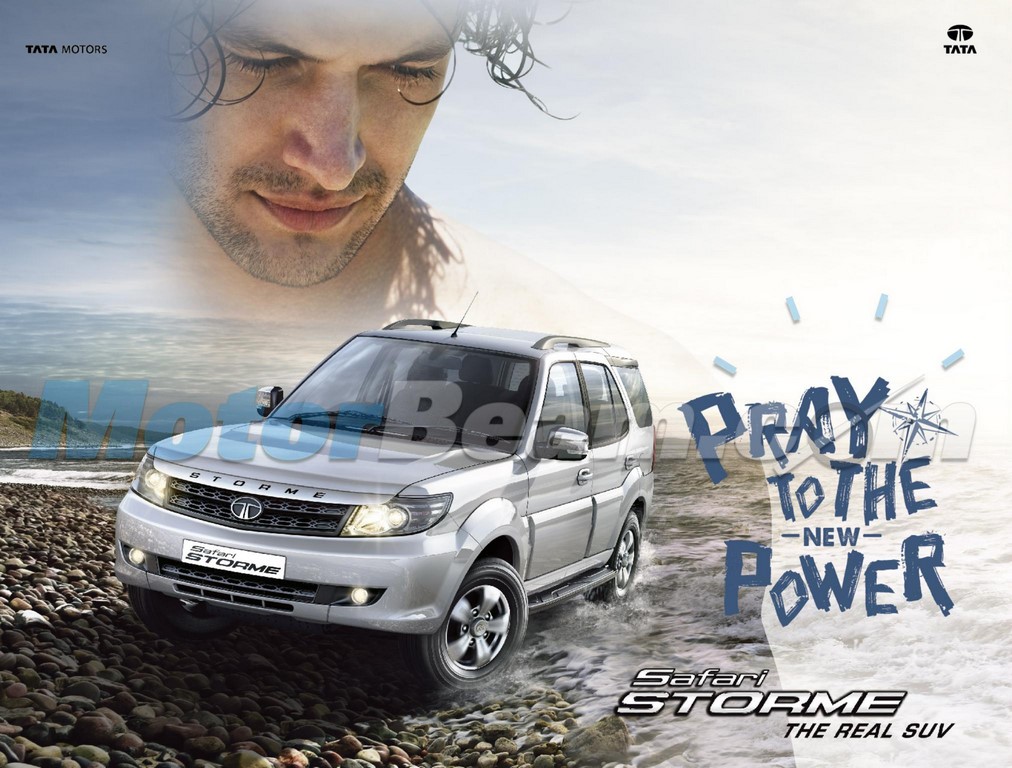 The torque output remains the same 320 Nm of torque in the range of 1,700-2,700 rpm. Whatever happened to the Varicor 400 which they were testing is not known at this point? Transmission remains a 5 speed manual unit while the SUV now gets a new clutch. 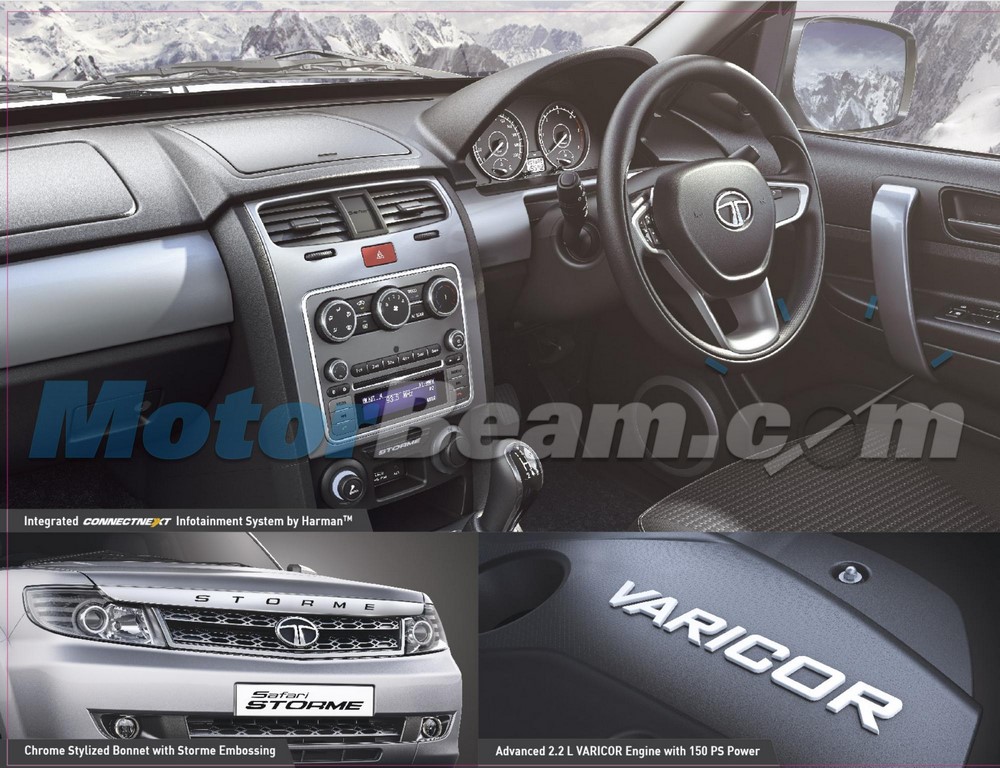 If the information shared by this leaked brochure is correct, they have killed the base LX variant which gets as barebones as possibly Force Toofan! Heck, it will be shod with 15 inch tyres which is what your Swift runs on! What’s more, Tata has made it a 5 seater instead of the standard 7 seater which the Safari has always been. It now gets power windows only on the driver’s side and just one auxiliary power socket. It does NOT even get ABS! 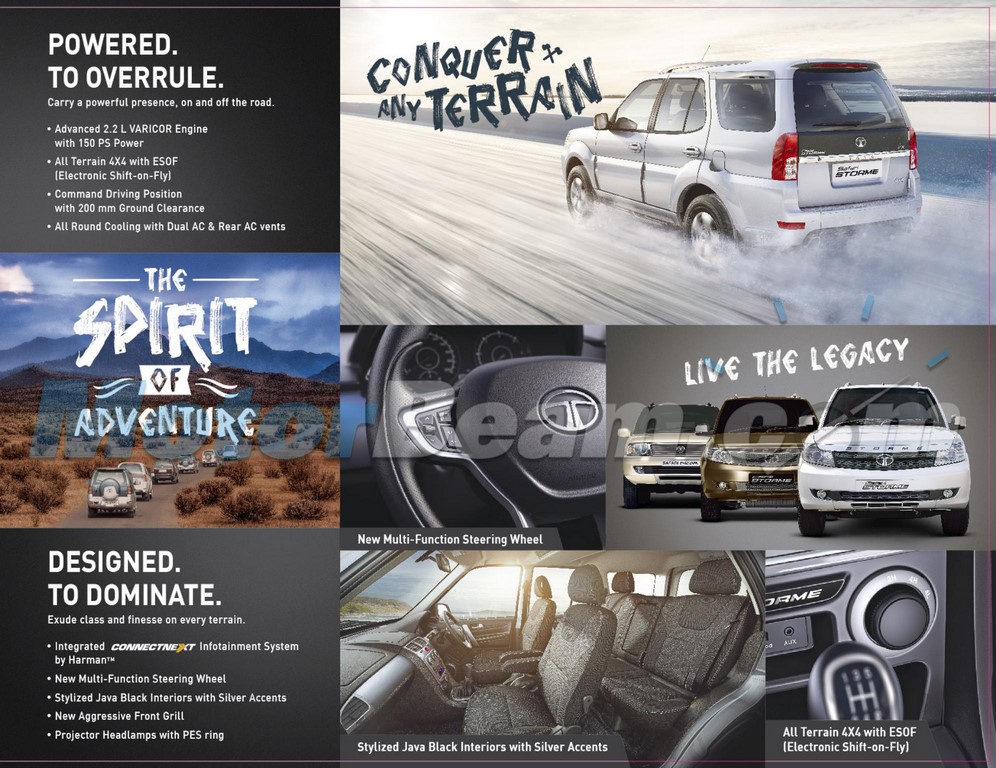 The entire Storme family though gets a new remote flip key and a bigger 63 litre fuel tank, while models above the LX get a new infotainment system by Harman with steering mounted controls. In higher variants the display of the infotainment system backs up as a display for reverse parking guide. Sandstone beige interiors are now available only in the base variant and the Sahara beige scheme has been shelved completely. The entire Strome family though continues to get just the Java Black interior scheme in fabric. 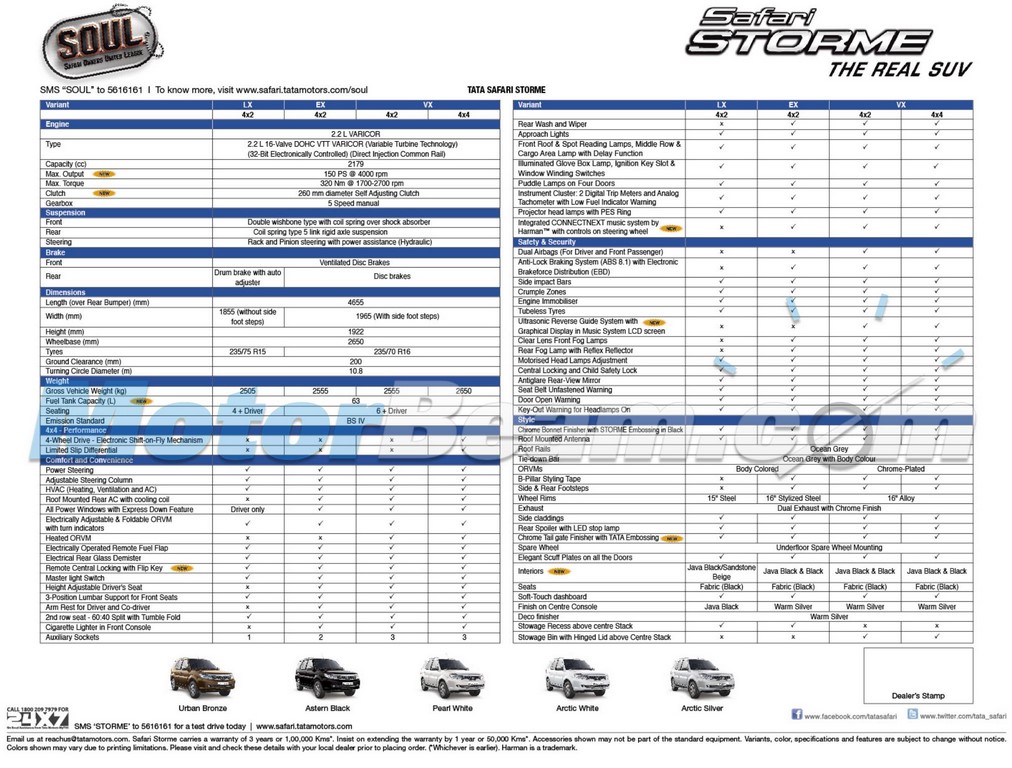 The report further claims that base variant of the Strome will start with an introductionary price of Rs 9.99 lakhs which is less than the present version’s 10.41 lakhs (both prices ex-showroom, Delhi). In terms of colours, the Safari Storme facelift misses out on Sardinia Red and comes only in Urban Bronze, Astern Black, Pearl White, Arctic White and Arctic Silver.

Tata, if the information shared in this brochure is correct, we suggest and urge you not to waste your time. Even the diehard Safari Storme fans (not many are anyways left) will applaud you for your decision, until you have some shocking surprise in store. And that shock can only come if your base LX costs 6.99 Lakhs or less!