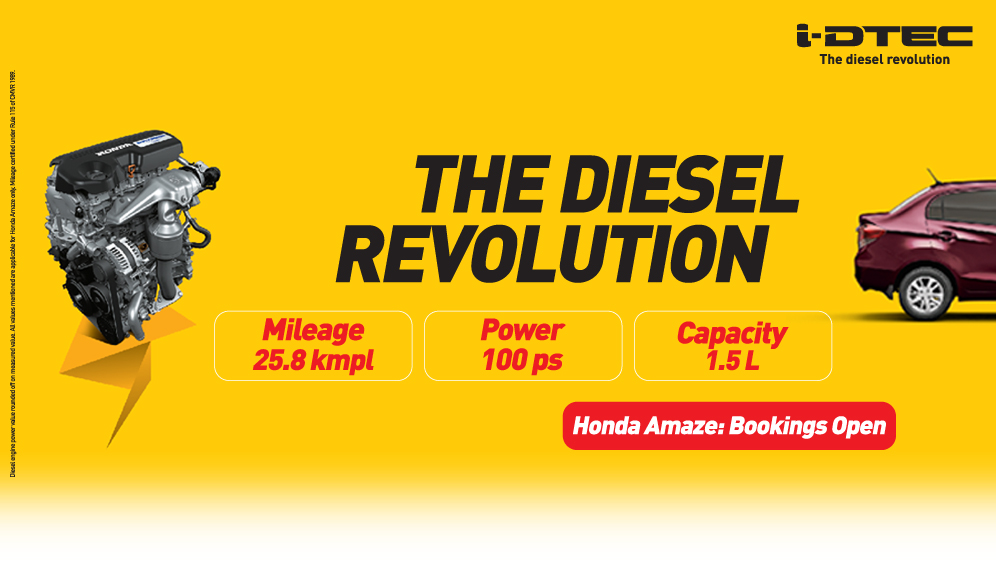 If you have been waiting for a game changer in the Indian small car segment, it appears to be arriving very shortly under the name of Honda Amaze.

With official information out, it is just a matter of time when Amaze will hit the roads. Honda has officially declared the war and opponents must be fretting sitting at their plants. Amaze is Honda’s first diesel assault on the competition and it will square up against the current numero uno Maruti Dzire which sells in plenty. Amaze will also compete head-on with the other 4 upcoming compact sedans. (Read List Here)

If you have been following MotorBash, you were among the first ones to know about the official fuel efficiency figure of 25.8kmpl much before than others. This is a mind-boggling number considering that it produces 100PS of power output and 200Nm of torque from its 1.5L i-DTEC diesel mill. But, shall we ascertain that to Honda’s EarthDreams technology. The engine is an all-aluminum unit which is the lightest in the segment.

Along with this diesel mill, Amaze will also come with Brio’s 1.2L petrol engine. Amaze will also be offered in both manual and automatic transmission options. The good news is that, you can go ahead and pre-book your Amaze as Honda has officially put up a banner at their website. And, if you want to wait a little to hear out its price, the launch is scheduled on 11th April and needless to say, we will be covering the event live for all of you and share the official word as it comes out from Honda’s top honchos.

For our complete coverage on Honda Amaze, click here.