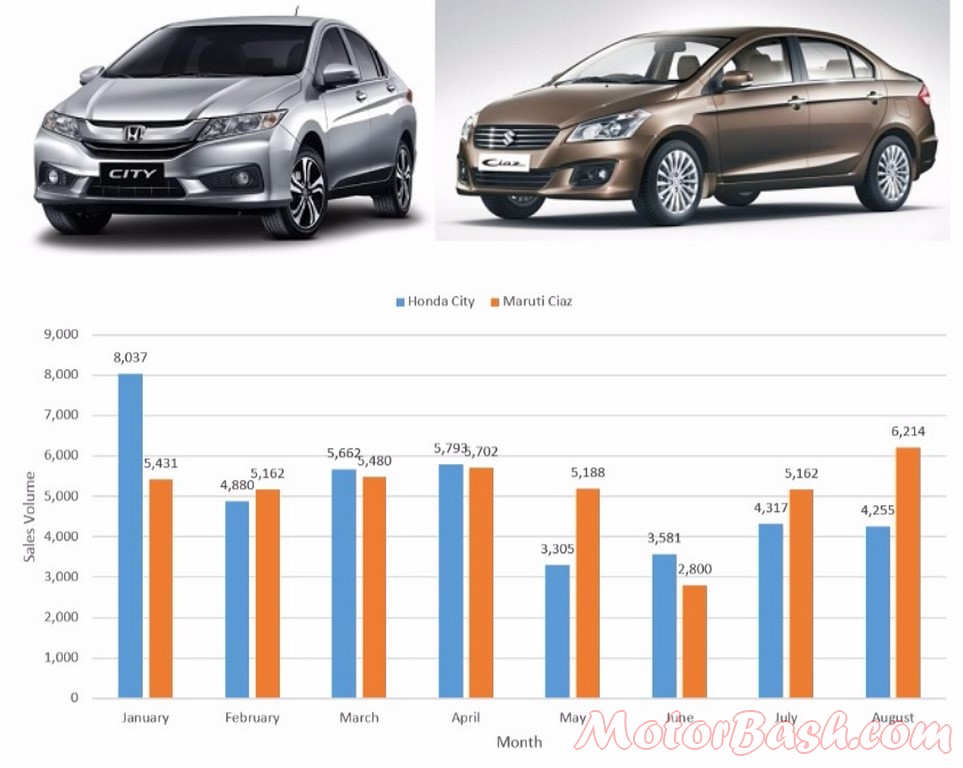 The fourth generation Honda City took the market by a storm and quickly raised the Japanese car maker to the top slot in the segment. Unveiled for the first time globally in India, in November 2013, the car was launched in January 2014. Since then it has hit the 2 lakh sales milestone this year. The number now stands at 2,00,098 units. But how does it stand against its key rival Ciaz at the moment?

The C2 sedan territory (mid-sized sedan) has been traditionally the hunting ground of the Honda City. The Ciaz is Maruti’s third attempt to go premium and it seems to have finally hit the goldmine. If we look at the calendar year 2016, the Ciaz has hit a volume of 41,139 units while the City stands at 39,830. Yes, the difference of 1,309 units may seem small, but that is just the beginning of the tale.

If you look at the graph above, you will notice that the gap between the two cars has been high in the last few months. Yes, June was a bad month for Maruti, but the consistency maintained by Ciaz is really commendable. Honda did say that they are shifting from a diesel centric production to a petrol one. And that seems to be taking a lot of time.

Ciaz with an affordable price tag, also gets SHVS technology. The latter has reduced the price tag for the diesel versions thanks to government subsidies. It has also struck a chord with consumers with this mild-hybrid technology. The battle though has just begun and the tale is all set to become even more interesting.

Till then stay tuned to Motorbash for more.