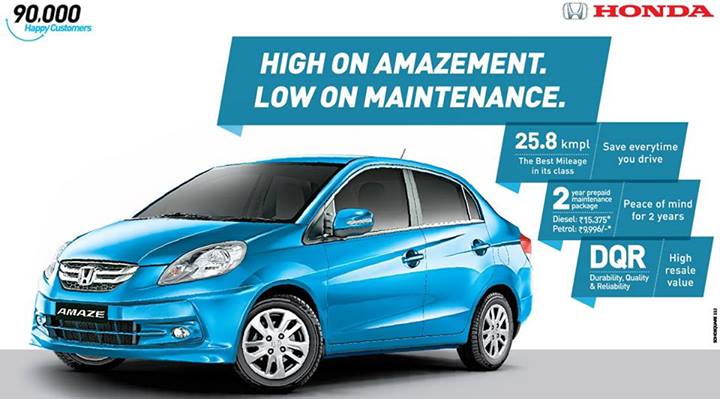 Honda’s success story with its new diesel engine could well be called its second innings in India. It all started with their compact sedan Amaze which was launched last year in April 2013.

A diesel loving country like India had been starved of a Honda diesel mill for all these years because the Japanese automotive major did not consider the quality of Indian diesel to be up to their standards. But the huge difference between the prices of petrol and diesel and the ever-shifting customer focus on diesel-powered cars ensured Honda to venture into this segment.

It’s been little over a year that Honda released the Amaze in India, and the compact sedan has literally amazed tons of Indians and has managed to sell over 90,000 units. Though it has lost a bit of steam since the launch of its Korean rival Xcent, the total sales figure so far must have managed to bring a lot of smiles on the faces of the management. This is precariously close to 7000 unit sales per month.

Along with other bits, Honda is promoting their Amaze with the abbreviation DQR, (remember Toyota’s QDR) which stands for Durability, Quality and Reliability.

The 1.5L i-DTEC, which also does duty on the new City, produces a decent enough 100PS of power and 200Nm of torque, and at the same time gives a segment-best mileage of 25.8kmpl ARAI rated! A few Amazes we have driven had returned about 23kmpl on highways so this figure is achievable.

Honda is also offering a two year prepaid maintenance package which costs Rs 15,375 for the diesel version and Rs 9,996 for the petrol. Honda recalled 15,603 units of the non-ABS petrol variant of the Amaze due to a possible fault in the proportional valve.

The next diesels from the Jap are Mobilio MPV and all-new Jazz.