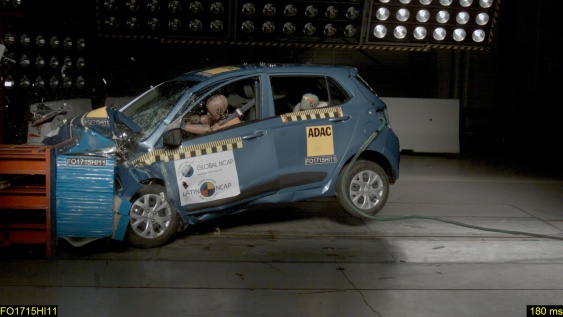 Vehicular safety is a big point of consideration in developed markets. However the same can not be said for India! The latest crash test result of the India-made Hyundai Grand i10 by Latin NCAP is another insight into how unsafe cars we are used to driving on our roads. The small hatchback has received zero stars in adult occupant safety!

Latin NCAP tested the base version of the Hyundai Grand i10 which was manufactured in India and sold in Chile. The worst fear for all – the India-made Grand i10 is nowhere near as safe as the one sold in European markets.

Here’s what the Latin NCAP President, María Fernanda Rodríguez had to say on the results:

“It is sad that the Hyundai Grand i10 offered in Latin America is different in terms of safety to the one offered in Europe. Given this result and knowing that Hyundai is a brand with presence in many markets around the world, where it sells the same products, they should offer the same safety level in all the countries.”

The base variant does not get any airbags which is what we know but the bigger issue is this – it doesn’t get a stable structure like its European edition. Protection offered to the driver’s head and chest was poor while in case of the front passenger it was found to be marginally better. Chances of damage to passenger’s knees was high. The body shell too was found to be ‘unstable’ and was not capable of withstanding further loading! Here is the video for you…

Whenever we have asked Hyundai about the lack of safety offered on India-made cars, they have always ducked by saying – All cars they manufacturer here adhere to the Indian safety norms! And talking about the ‘Indian safety norms’, even left hand side ORVM is also not mandatory, just to give you a reference…

Recently, Hyundai conducted a Head-to-Head Collision test of an America-made Sonata against the one manufactured in Korea just to show the home countrymen that there is no compromise in the home-made car. You can watch the video here. So, can Hyundai do the same for its car manufactured here….?

We may crib about this as a government lapse or the manufacturers, but the end consumer’s safety is put at risk! As always, we suggest you to buy a car which comes with basic safety features such as ABS and airbags, even if it is a segment lesser you may have to live with… And let us hope our lives become ‘as important’ as the Europeans or the Americans!