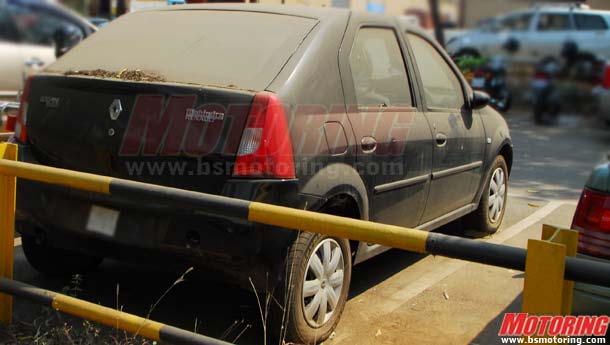 This story dates back to 2010 when Mahindra and Renault were still partners and the Logan was sold as a Renault Logan, By Mahindra car.

Later on, due to certain internal reasons both the companies decided to switch tracks and Verito was born in India under Mahindra’s badge and Renault entered as a sole entity with their set of cars. The news that is making big waves is the Mahindra’s compact version of Verito.

Despite the presence of clear spyshots, it is still not very clear whether Mahindra will promote it as a large hatchback or a notchback. Nonetheless, we have just landed upon an interesting spyshot. Published by BS Motoring way back in March 2010, the car in the pic is Logan with a chopped boot.

This pic reveals that Mahindra also tried bringing the Logan under 4 meters with very similar tail lamps (as the original Logan hatch). However, as is evident from this spyshot, this rear design just did not click for Mahindra and hence this car could not see the light of the day. And with the compact sub 4 meter Verito, Mahindra moved the tail lamp cluster to the C-Pillars.

Which design do you feel looks better, the black Logan CS snapped in this spyshot or the Verito compact which is about to hit our roads? For all details on Verito compact, click here.