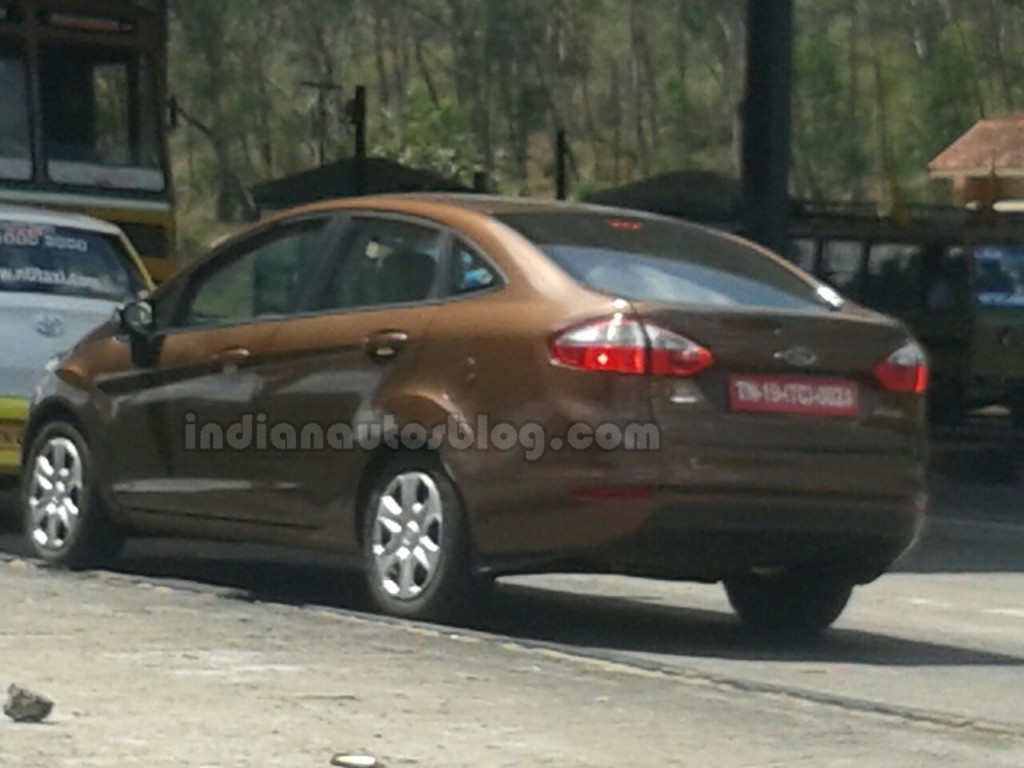 What you all know is that Ford will be launching their facelifted Fiesta in the market very soon, most possibly within this month itself. At least two times it has been snapped doing the regular test rounds in India.

In a damper of sorts, a report published by Autocar back in August 2013 claimed that there will be no change in terms of engines that will be on offer, which means that the car will NOT get the much-anticipated 1.0 liter turbocharged EcoBoost petrol engine. This left everyone surprised considering that the EcoBoost on the new Fiesta was a given! Ford is big time tight-lipped on this as well and their updated official site only talks about the very obvious 1.5L diesel motor.

However, as we were going through the spyshots we already have courtesy Indianautosblog.com, there is an interesting observation we noticed, a possibility of the mule pictured here sporting the ‘EcoBoost’ engine! How? Read the following points..

Point No 2. Ford EcoSport doesn’t have any engine tag for the 1.5L petrol engine whereas the EcoBoost and TDCI diesel do have specific logos at the rear. Even the current Fiesta only comes with the ‘TDCI’ badge whereas the 1.5L Ti-VCT doesn’t get any specific badging at the rear. We can, hence, conclude that the upcoming 2014 Fiesta will also NOT get any badge for the 1.5L petrol engine. This also gets clarified by one of the pics at Ford’s official website.

From the above two pointers we can conclude that the badge at the rear of this mule is either the TDCI or ECOBOOST.

Point No 3. The TDCI badge in India comes with a black ‘TD’ but more prominent red ‘Ci’ on glazing metal base. On the other hand, EcoBoost comes on a black badge prefixed by a leaf on the Indian EcoSport. If that be the case, this can easily be confirmed as the TDCI because, while the text is not visible, the base is for sure silverish white. Read point No 4 for counter-statement.

Point No 4. However, internationally Ford denotes the ECOBOOST with a slightly different badge. The text ‘ECO’ in blue, italic ‘BOOST’ in green and a leaf is written on a silver metal base as the following pic.

Point No 5: This is possibly the most important pointer of the complete discussion. The ECOBOOST badge is definitely longer than the TDCi!

Now, look very closely at the spyshot again and answer the following questions:

We could just be wrong in our assumption, however, we are not making any claim here. We are just trying to analyze what we see and the obvious which should have been! If the EcoBoost Fiesta doesn’t make it to the country, new Fiesta will just be another car on offer in the crowded segment! Ford will definitely loose a chance which could have made Fiesta a grand success in the country.

By the way, do share what do you feel about the logo on the mule!