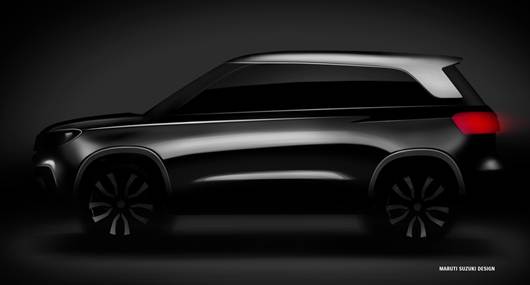 So Maruti has started making noise about their upcoming compact SUV which will be officially marketed under the Vitara Brezza brand name (as we confirmed a long back here). Howsoever weird it may sound, but Maruti has confirmed they will move with this name. Brezza, by the way, is Italian for ‘Fresh Breeze’!

In an official press release shared by the company, they have released the first sketch of the car, which they say, has a confident and energetic design. According to the designer, Brezza has high ground clearance, short overhangs and a dynamic posture.

They have also confirmed Vitara Brezza will be globally unveiled at the Auto Expo in February and will be launched ‘a few weeks’ after the grand show. They have also promised to reveal more details in the ‘run-up’ to the Auto Expo.

Going by what we know, sub 4 meter Vitara Brezza will be available with the 1.2 liter K-series petrol engine as well as the 1.3 liter DDIS diesel motor in the 90PS VGT trim. There is no confirmation on the 75PS variant but what we understand from our sources is that there will be no automatic or AMT variant upon launch.

And, if you were expecting an XA-Alpha like disruptive designed compact SUV to fight out the EcoSport and others, we suggest you keep your hopes low… 🙂 But Maruti will be going all guns blazing with this one… we are sure…