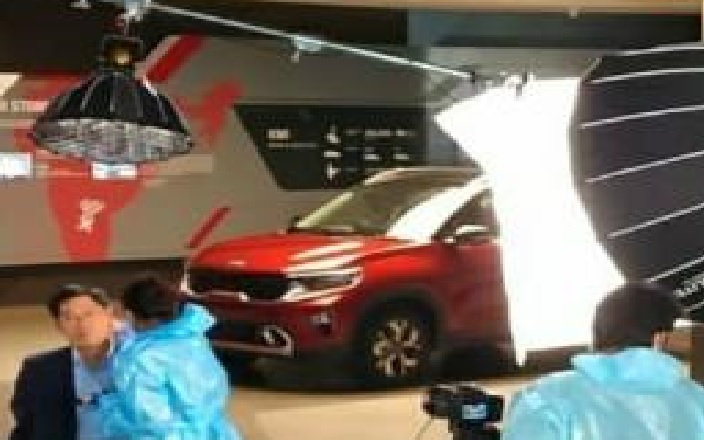 Many Kia Sonet images have emerged just ahead of its official unveiling date. It, surely, is an exciting product…

Kia has had a blockbuster run at the sales tally in India so far with its Seltos. It has also introduced the large Carnival MPV and the Korean is now ready with its next product for our market – the Sonet.

Sonet is a sub four meter compact SUV which will sit under the Seltos and hence has a potential to break some more records. In a latest update, the upcoming car was busted during an ad shoot.

The red colored, absolutely uncamouflaged display model reveals what is in store for all the prospect buyers. The face looks similar to the concept with a typical Kia grille and sweptback headlamps.

Apart from that, Kia has, today, shared some official sketches of the upcoming model. This set includes few pics of the interiors. It, then, gets revealed that the production model will get a very similar looking design as its concept.

Features will include a large 10 inch touchscreen, all-black theme, Bose music system and an automatic gearbox.

Sonet will share its engine combinations with sibling Hyundai Venue and the car will be launched in September. But ahead of that Kia will unveil it and the date is 7th August 2020!