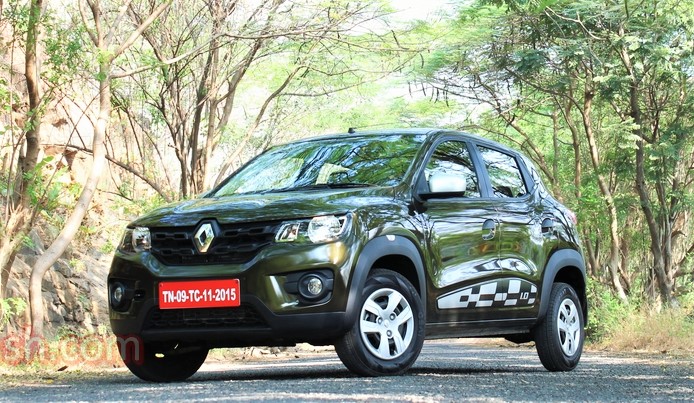 While I start to write this, the Kwid AMT review, I somehow feel it’s going to be our most concise road test review yet. See, sometimes, a first drive review can be comprehensive (like our Kwid review, and also the RediGO review), but not today. Why? Well, simply because I understand that all of you, who have access to the internet, by now would already be knowing everything there is to know about the Kwid 800 and the recently launched Kwid 1000 (yes, I like to call the Kwid 0.8 and Kwid 1.0 by these names, respectively). In other words, by now, you would not only know about the cars but also stuff like their sales figures, and how badly that’s affecting Maruti Suzuki, etc.

Heck, I think you might also be aware of Renault’s strategy for India for the next 500 years, thanks to some great astrologers-cum-analysts-cum-reviewers who perhaps know more about the brand and its plans than Mr. Ghosn himself. I am sure they know Trump’s next move too. And most of you would have already read, seen, or heard one or the other Kwid AMT review in the last few days. But, since you are still reading this, I take it that you want to know more, right? Or, you might just be here for our take on it. Either way, I shall comply. 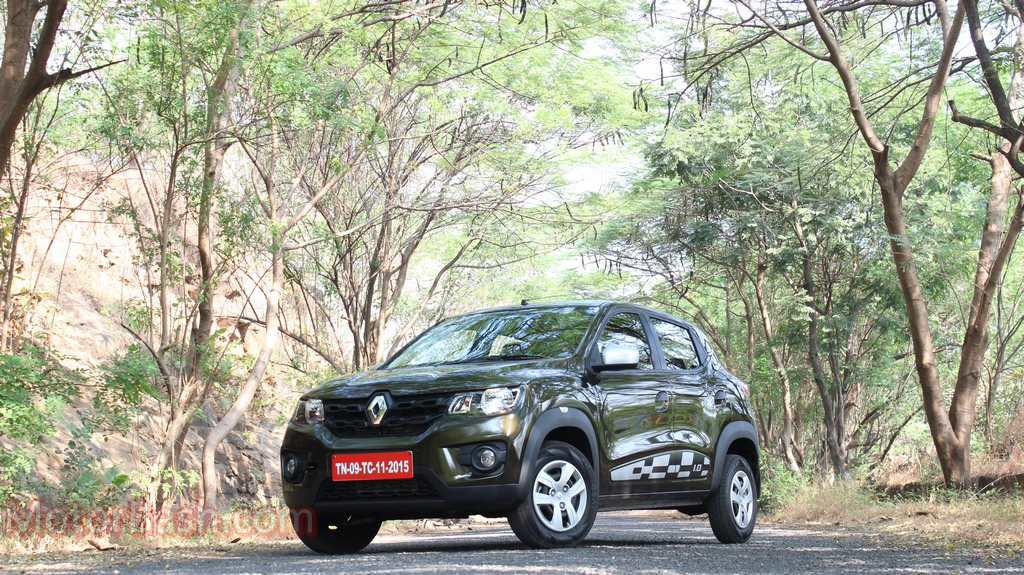 First things first – the design. I didn’t want to talk about it because I know that unless you were in coma you would already know how big an impact the Kwid’s design has made to the Indian small car landscape, which until last year used to look like something that could only be conjured by a consortium of Shin Chan followers. Imagine that kind of kiddie party being disrupted by someone like Robert Downey Jr., in one of his metal suits (the Iron Man, for the uninitiated). That’s what Renault’s Kwid has done to the congregation of Manga caricatures that have dominated the small car scene in India for more than two decades now. 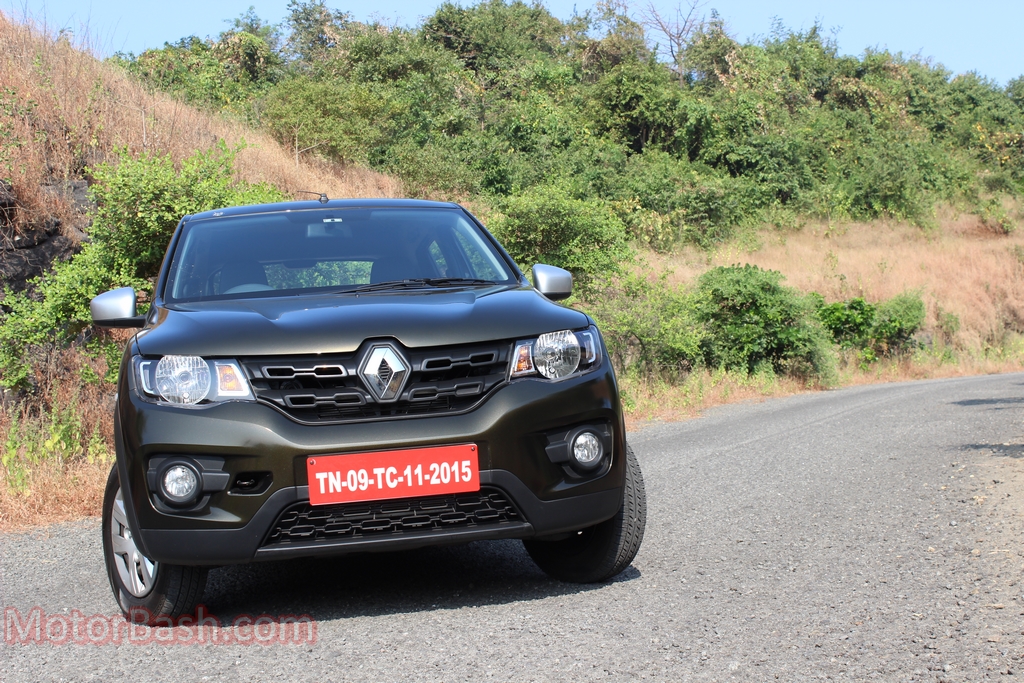 So, yes, the Kwid’s mini-SUV-like appearance, other than further damaging the brainstems of the rivals’ design teams, continues to make inroads into the hearts and minds of all and sundry in this segment. And I don’t see that changing anytime soon. Because, unlike most others, Renault have, thankfully, resisted the urge to give their latest product, the Kwid AMT, any ghastly chrome lip, nose ring, mascara, etc., to make it stand out from its manual siblings. A small Easy-R badge at the rear suffices in their opinion and I, for one, absolutely concur. 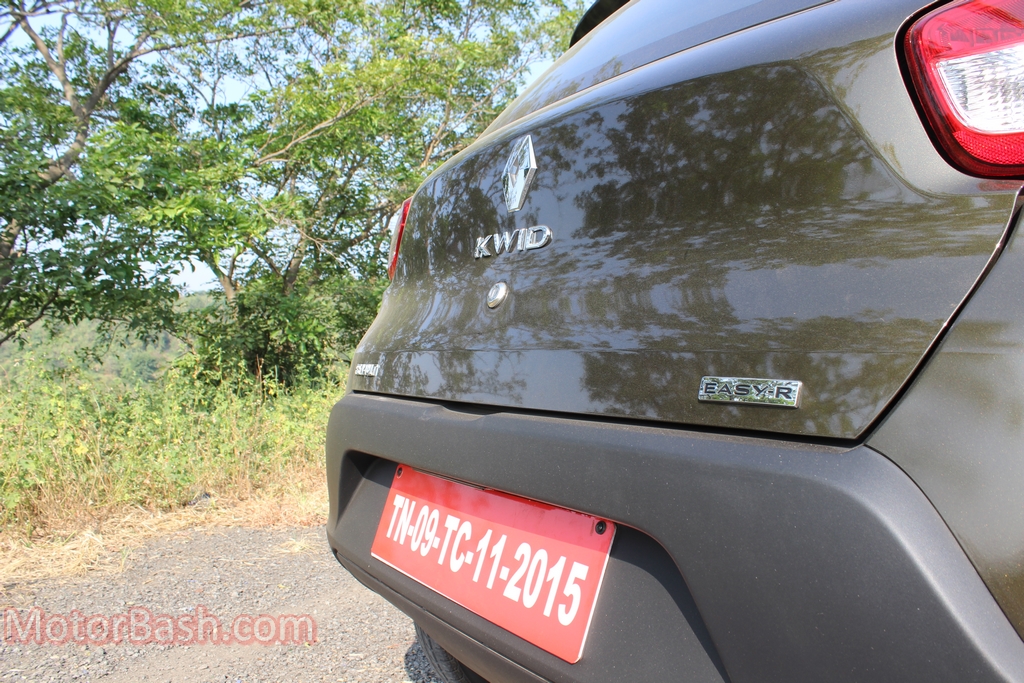 Of course, they did paste two stickers (one on each side) on the Kwid AMT like they did on the Kwid 1000, that tell the onlookers that it’s a 1.0-litre variant they’re looking at. However, even to a person like me, who abhors the very idea of graphics and decals on his bikes and cars, the ones here do look quite palatable. 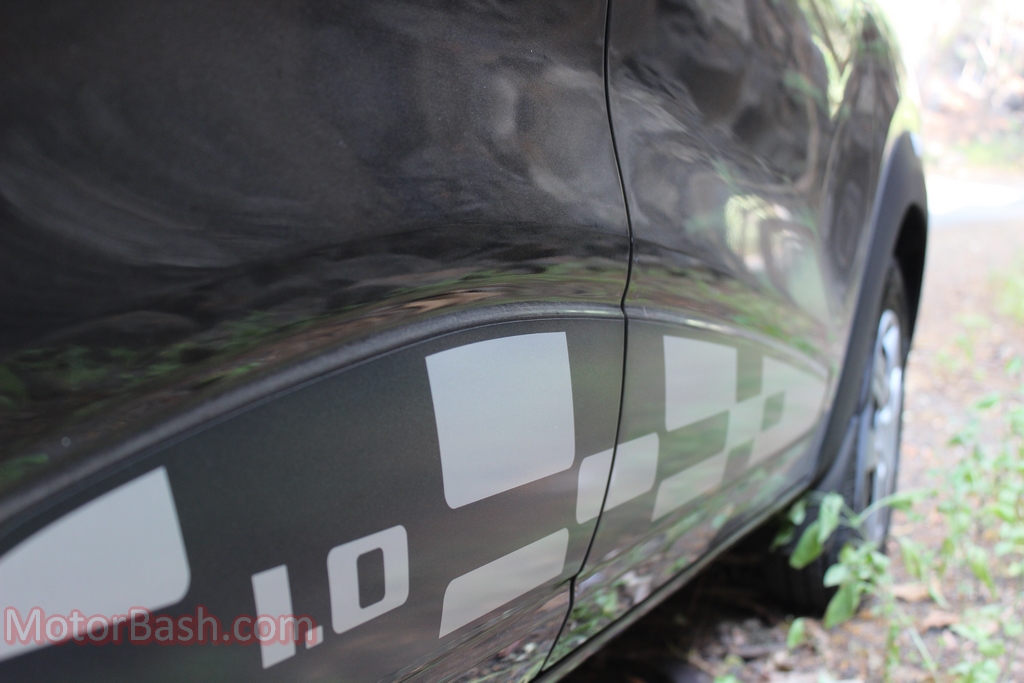 So, I guess, the accessory-crazy masses might just love it. In any case, the car looks as handsome as it did earlier; in fact, it looks point one per cent better than before, thanks to the new, bigger, thicker, and better rear view mirrors that merge a lot more cohesively with the car’s design now. 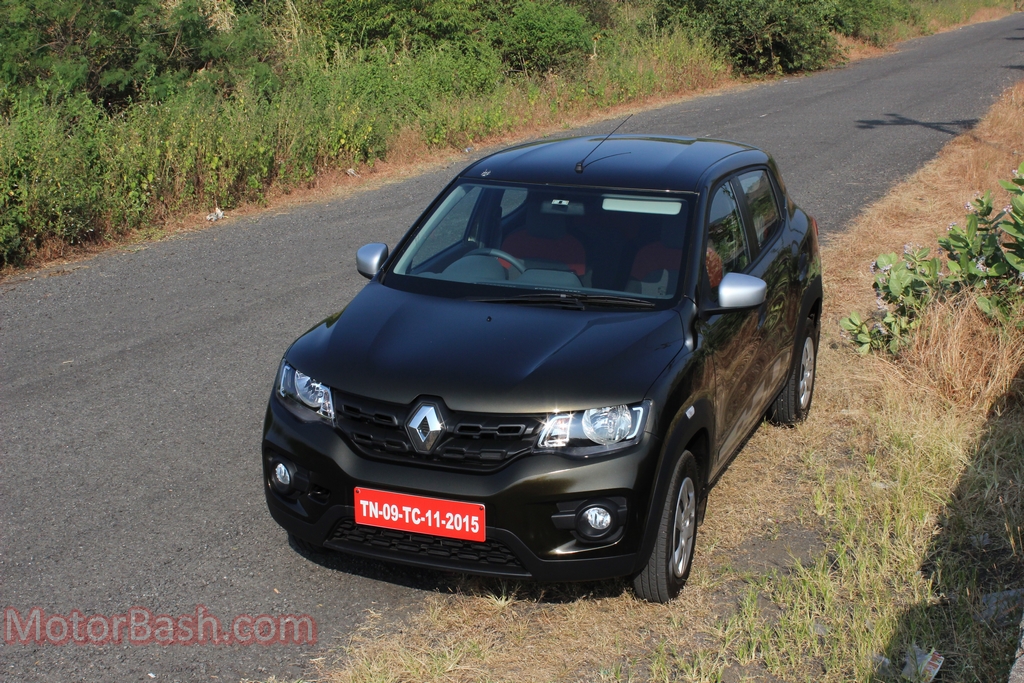 But you already know that, right? You came here, in all probability, to know just one thing – how does it drive with the AMT gearbox? You might also expect a Kwid AMT vs Alto AMT comparison here, or at least something along those lines. Let me see what I can do for you then. But before I get into it, I’ll reiterate that other than the AMT gearbox and the engine, everything else – the car’s dimensions, seats, in-cabin features, boot space, suspension, ride, steering, handling, stability, brakes, etc. – are exactly like in the Kwid 800. 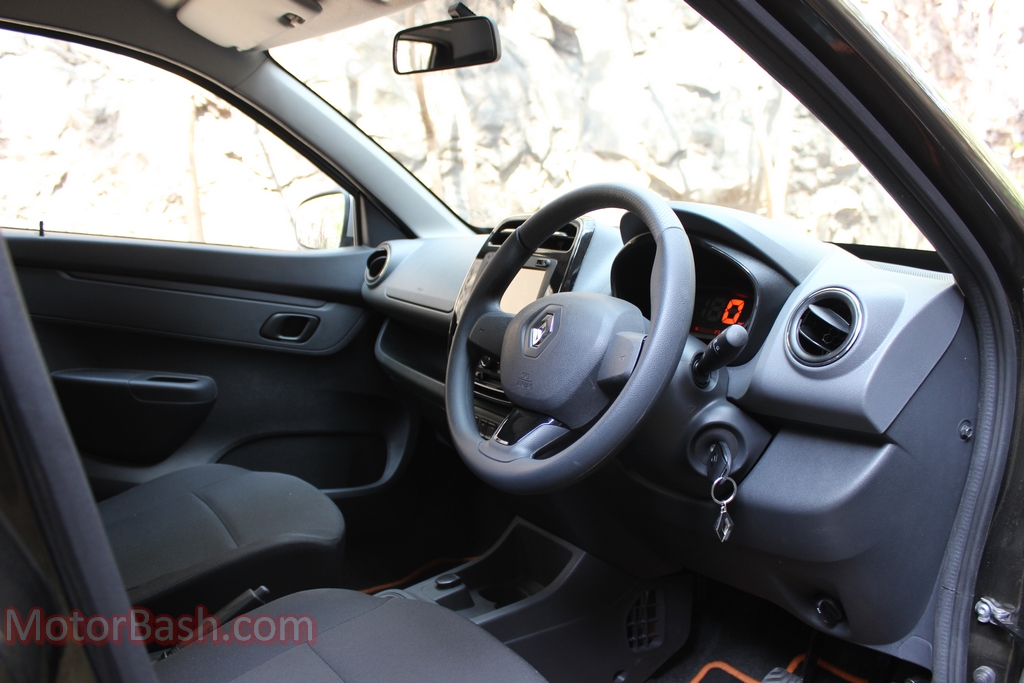 Which means, among other things, that the Kwid (be it the 800, 1000, or the AMT) remains the car with the BEST RIDE QUALITY in the segment, and also one of the best when it comes to passenger comfort and in-cabin space, especially legroom and shoulder room for all occupants. And it still offers the best-in-class boot space (300 L) as well. 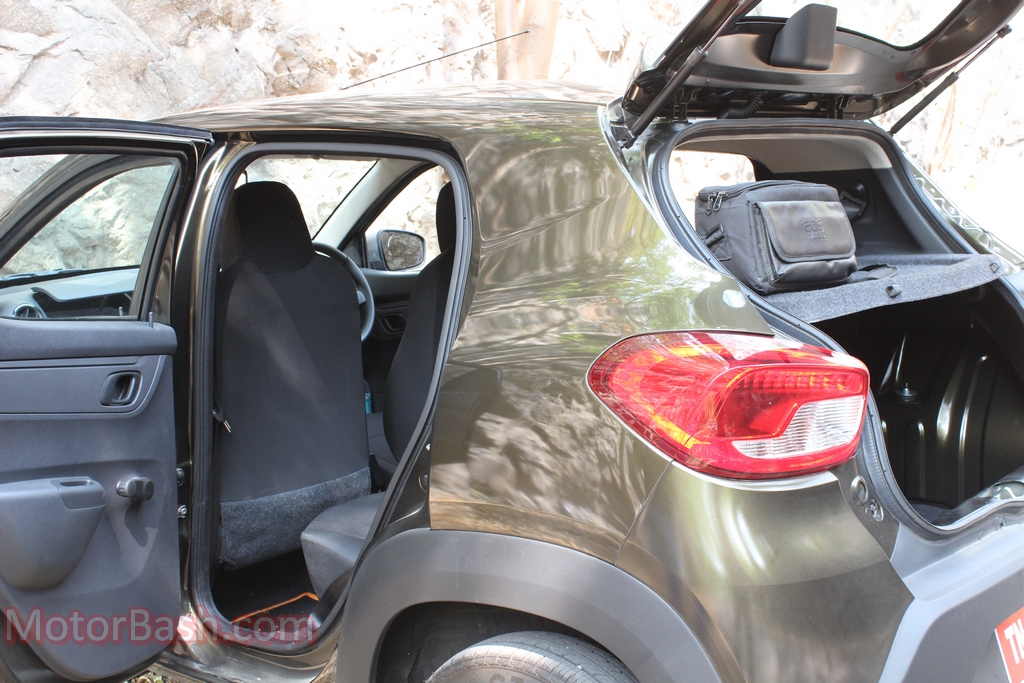 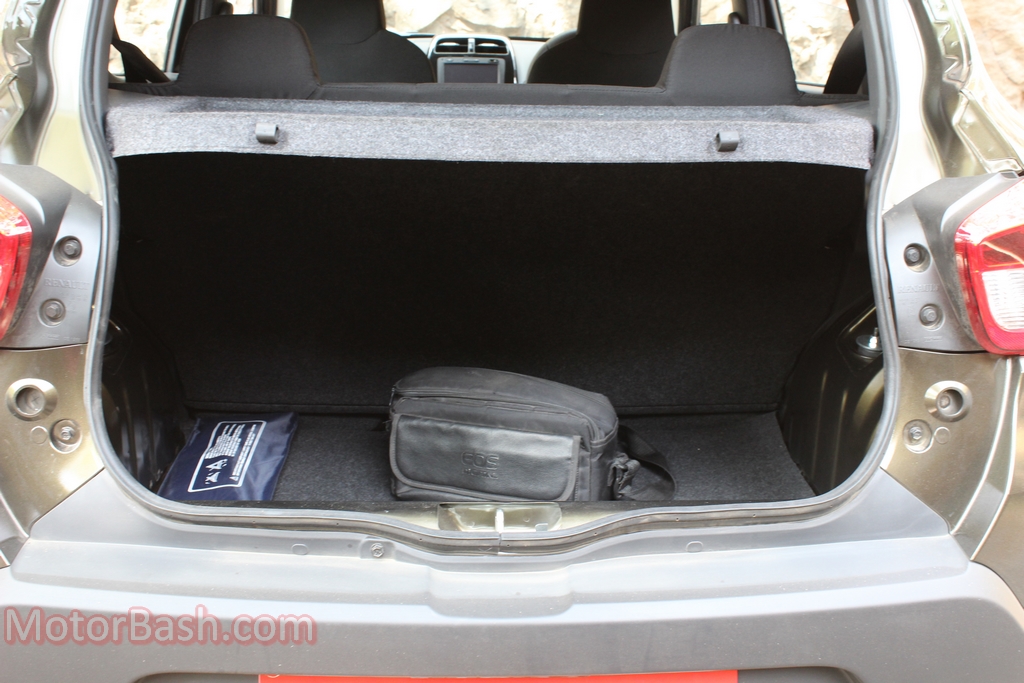 Okay, you knew all of that already too. The AMT gearbox now, then. But I would also tell you a little about the 1.0-litre engine along with it as this is the first time I sampled it, because I could not go to the media drive of the Kwid 1000 recently because I was terribly unwell. Chikungunya virus is a bad thing. It kills your drive. Temporarily, of course. 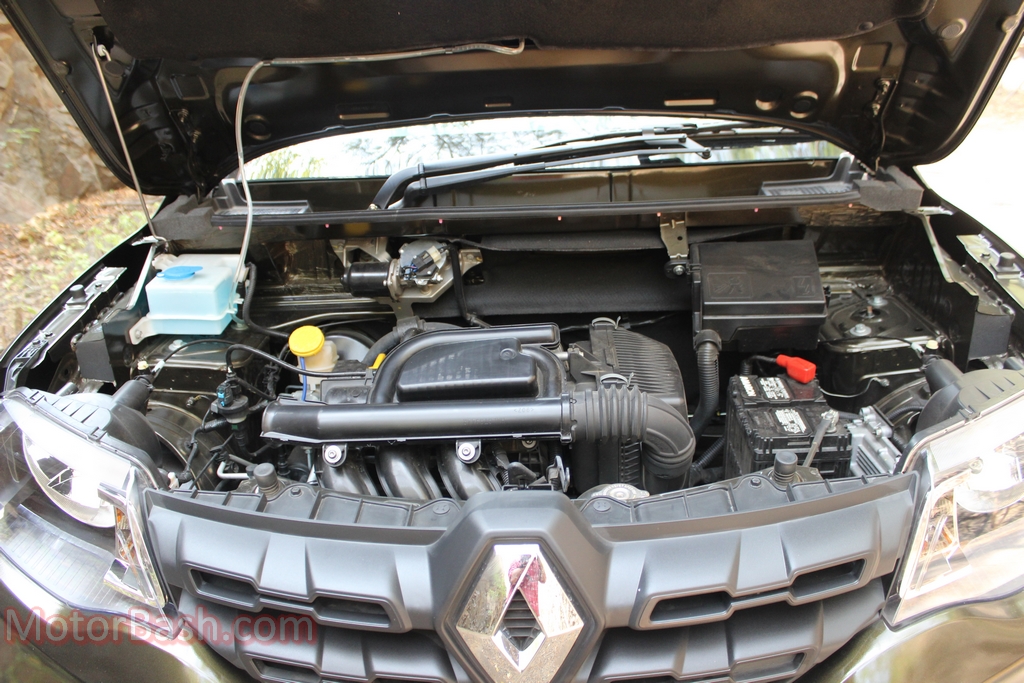 Anyway, crank the engine and if you have driven the Kwid 800 you’ll notice that the bigger engine in the AMT is a shade quieter in comparison. It’s still noisy on the outside though, but since the small task of driving comes with the prerequisite of sitting inside the car, you won’t mind it much. Unless, you plan to elope with someone whose father’s hearing power is still infrasonic. 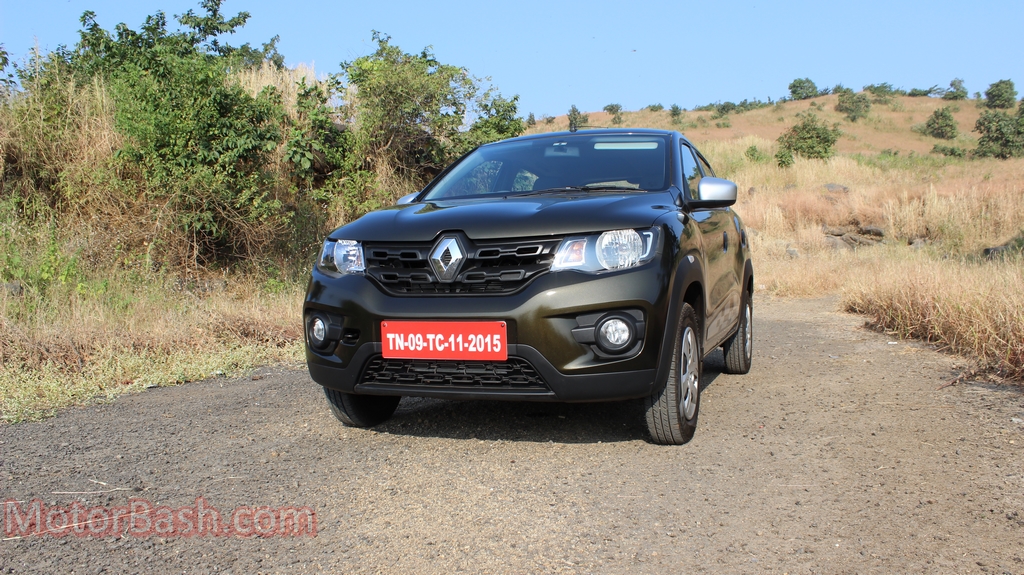 Inside, it’s all fairly quiet. I can say that because at no point (idle or triple digit speeds) I or my co-driver had to increase the volume of our speech to be audible to the other. 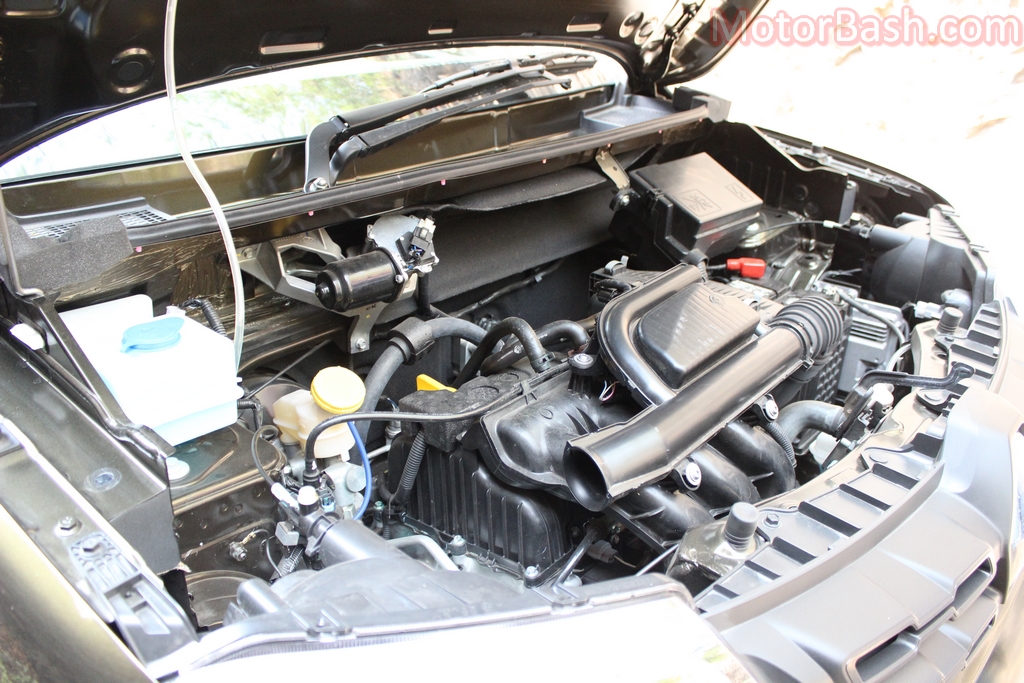 This 999 cc three-cylinder engine produces 68 PS at 5,500 rpm and 91 Nm at 4,250 rpm. The peak power figure is the same as the Alto AMT’s but the Kwid’s torque output is better by a Nm. The Kwid is also lighter than the Alto and as such enjoys a better power-to-weight ratio than the Maruti, which is something, as even the aliens would know, that not only helps in quick getaways from traffic lights but also aids in extracting more mileage for every liter of petrol as the engine simply has less weight to carry. 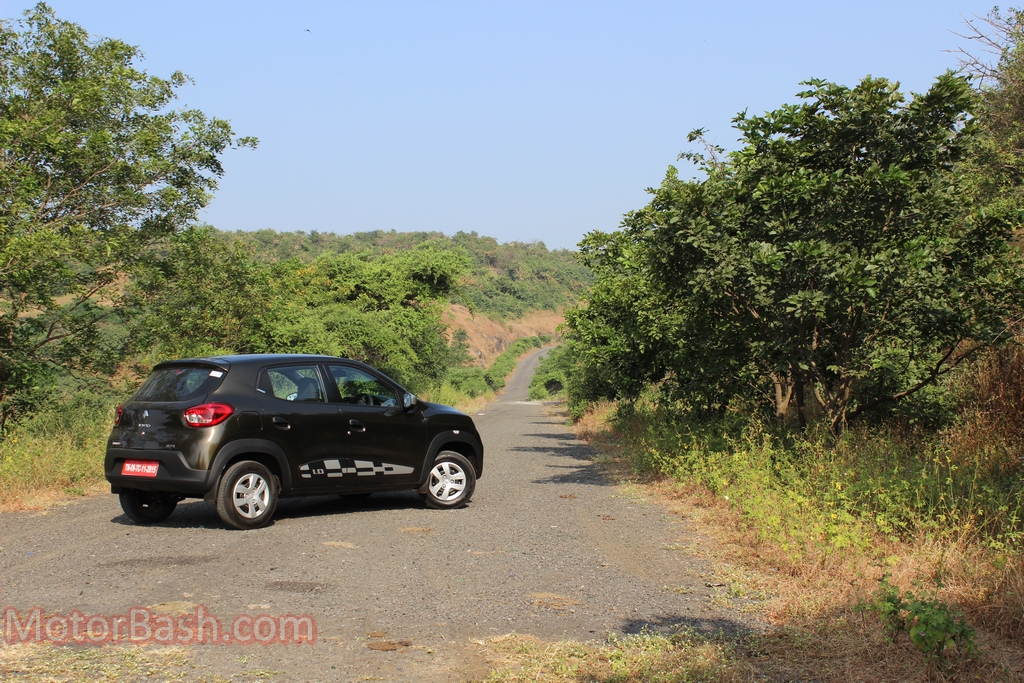 While the former (acceleration) is something you can check in the video clip below, the latter (fuel consumption) is again something Renault are proud of in their latest product. In fact, they claim the Kwid AMT to be even more frugal than the manual Kwid 1000 with the same engine. The ARAI figure for the AMT is 24.04 km/l whereas it’s 23.01 km/l for 1.0-litre Kwid with manual transmission.

You would have noticed in the video above that the Kwid AMT took around 19 seconds for the zero to hundred sprint. This was with two people on board, so losing my co-driver friend would have shaved off a second or two, but that would have been impolite. But, the intended customers will not be buying an automatic to indulge in traffic light drag races. They will buy it to make their lives easier. Hence, the Kwid Easy-R. Yes, the Kwid AMT is also known by that name. Remember the small ‘Easy-R’ badging I mentioned about earlier in this article? That’s what Renault term their AMT technology as, like they did with the Duster AMT as well. 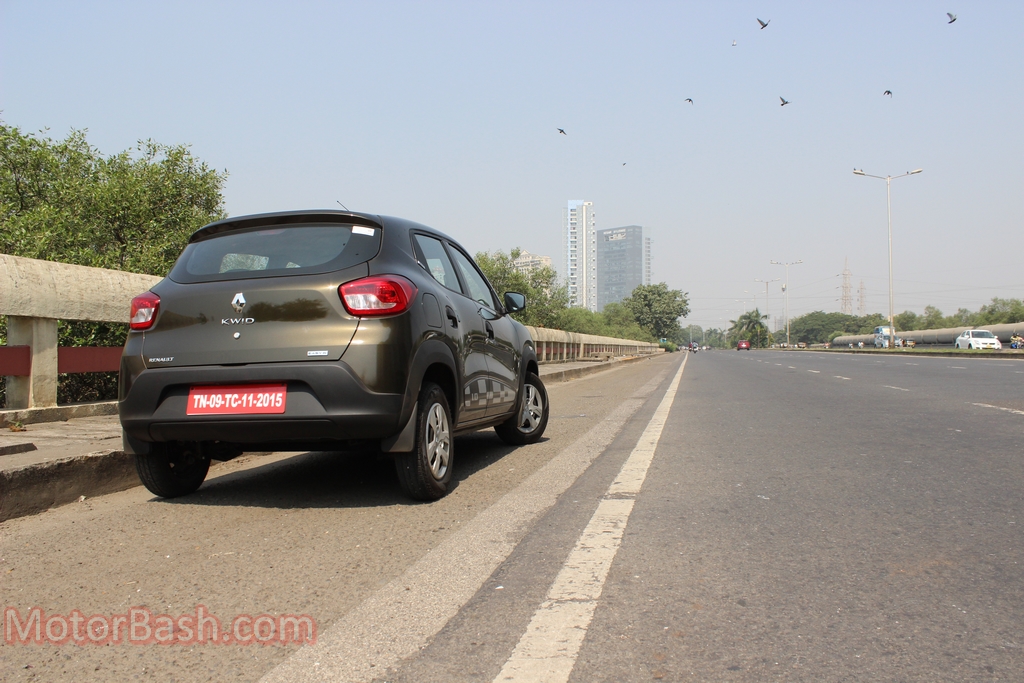 And easier it certainly is to drive than any other car I have ever driven! In fact, such cars might someday bring down the minimum legal age required for driving. First of all, it does not come with a conventional gear ‘lever’ with confusing (for newbies) slots and buttons. Instead, there is a simple dial on the dashboard with R, N, and D markings that stand for Reverse, Neutral, and Drive, respectively. You choose D to go forward; R, to go backwards, and N to do nothing, er, to stay in Neutral. 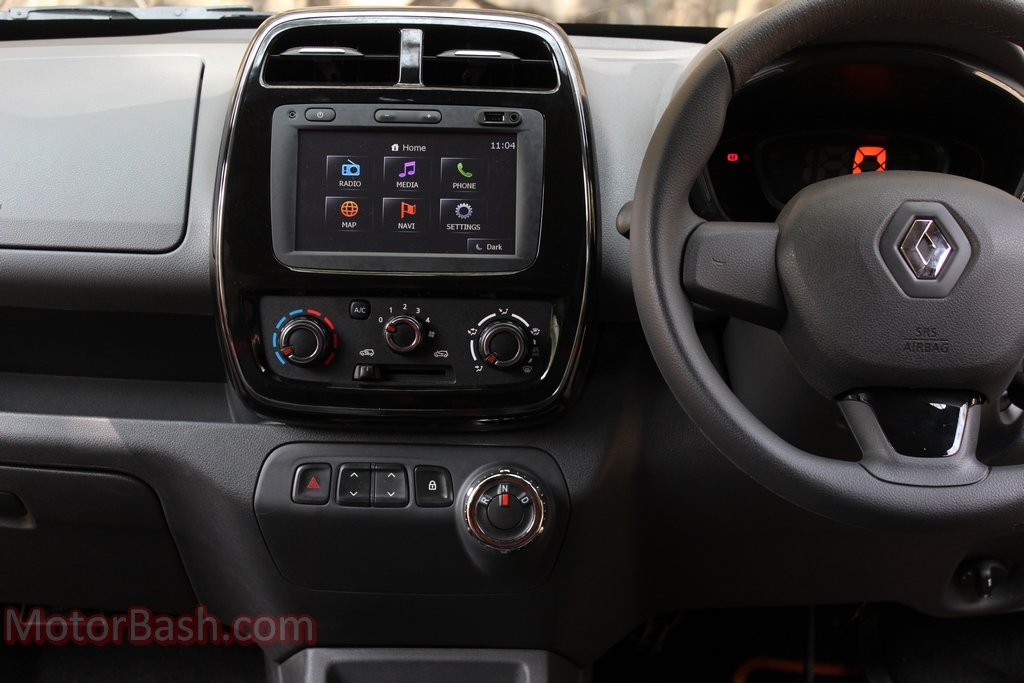 So you put your foot on the brake; rotate the dial to choose D or R (depending on your intended direction of travel); take the foot off the brake, and, well, nothing happens until you press the accelerator. And that’s exactly how it should be, ideally – the throttle and brake controls have to justify their existence, right? See, Renault have really followed the KISS principle with this one to make things as simple as possible for the end user – you apply throttle to go, and brake to stop, period. Unlike conventional automatics, where as soon as you take your foot off the brake pedal in D or R modes, the throttle pedal suddenly develops a conscience without you bringing your foot anywhere near it, and the car begins to move on its own. That’s creepy as hell and that is why perhaps this ‘feature’ is termed as a ‘creep’ function by manufacturers. Renault apparently did a survey and found out that just as the human creeps, who try to come too close for comfort, are not liked by most, the creep function also does not find favour by the majority of buyers in this segment. 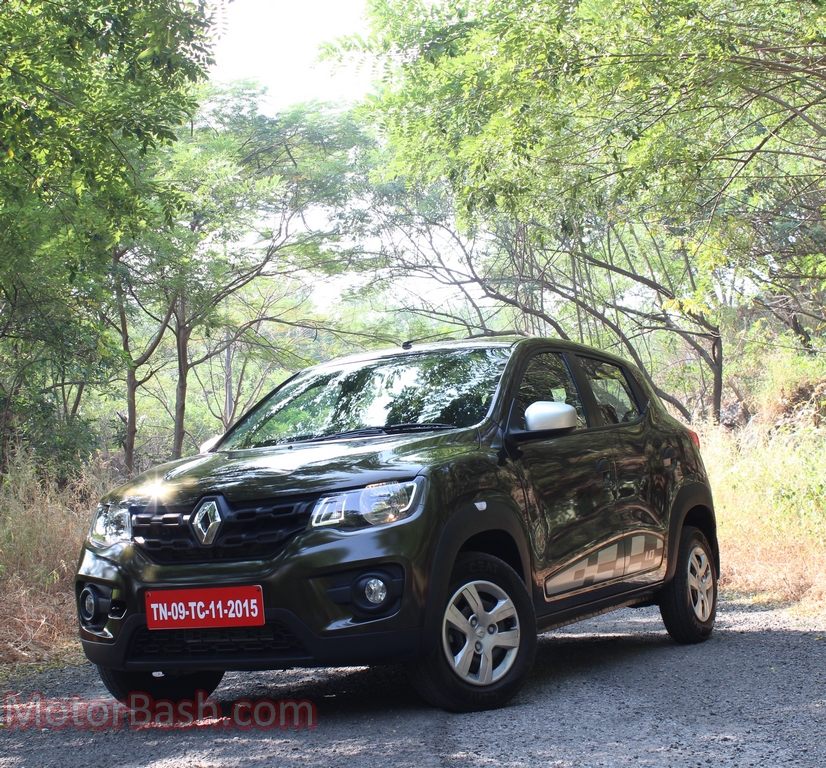 The trade-off is that, unlike conventional automatics again, the Kwid AMT will roll back on a decline if your foot is off the brake pedal. But that’s nothing to worry about as since there is no clutch pedal you can put your left foot on the brake; gas up using your right foot, and release the brake to move ahead. Or you can do the same move using the hand brake. Overall, even if you are one of the many who bribed their way to obtain their driver’s license, you’ll still find the Kwid AMT as easy to drive as those electric cars in Esselworld. 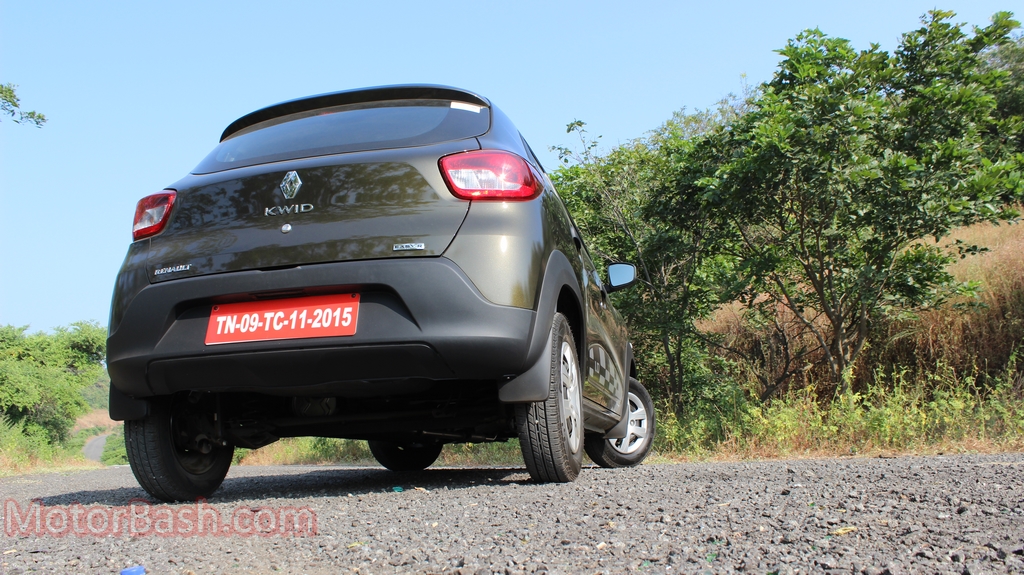 And it’s not just the newbies that this AMT gearbox intends to please. I was pleasantly surprised by the quick downshifts it offers when it’s pedal to the metal! I still remember driving the Celerio AMT a couple of years ago and deducing that it’s possibly the worst gearbox ever to come in a Maruti Suzuki. I am sure its user manual says something to the effect of “Overtaking Prohibited In Auto Mode”. That car is just like that adamant child who refuses to budge unless given the old-fashioned stick. That’s why it has a stick (manual) mode. In contrast, the AMT in the Kwid is good enough to not demand one – I already told you that it downshifts sooner than you’d expect, which is quite a revelation for a car in this segment. Moreover, sedate driving isn’t a rough-in-the-gut affair either – the upshifts are smooth and the fuelling is near-perfect too! 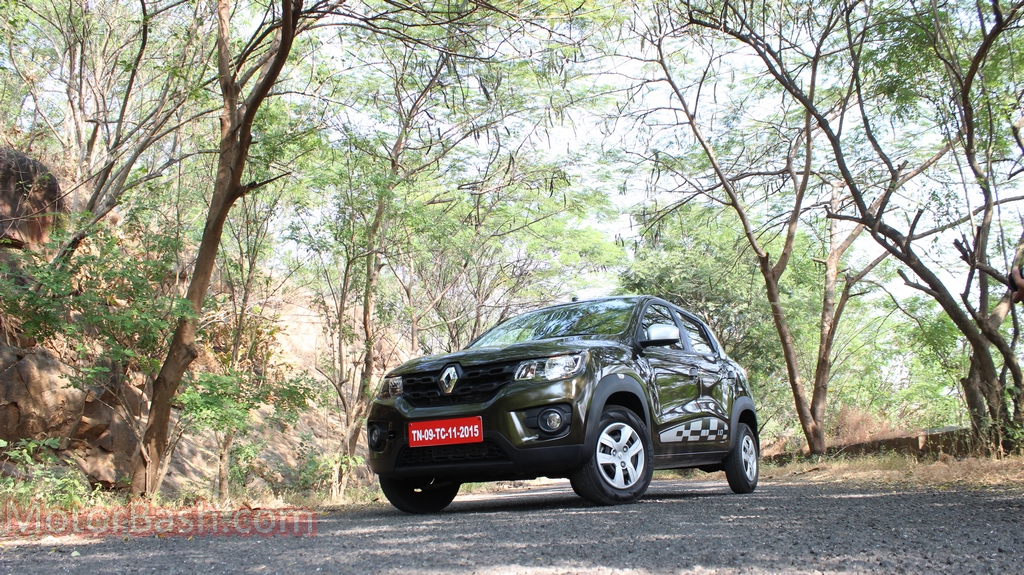 But you don’t necessarily have to take my word for it, because we auto journalists can act funny sometimes. We would moan about driver involvement in an S-Class; ride quality in a BMW; rear seat comfort in a Mahindra Thar, and paddle-shifters in the Kwid AMT. So please drive the AMT and let me know what you feel about it. 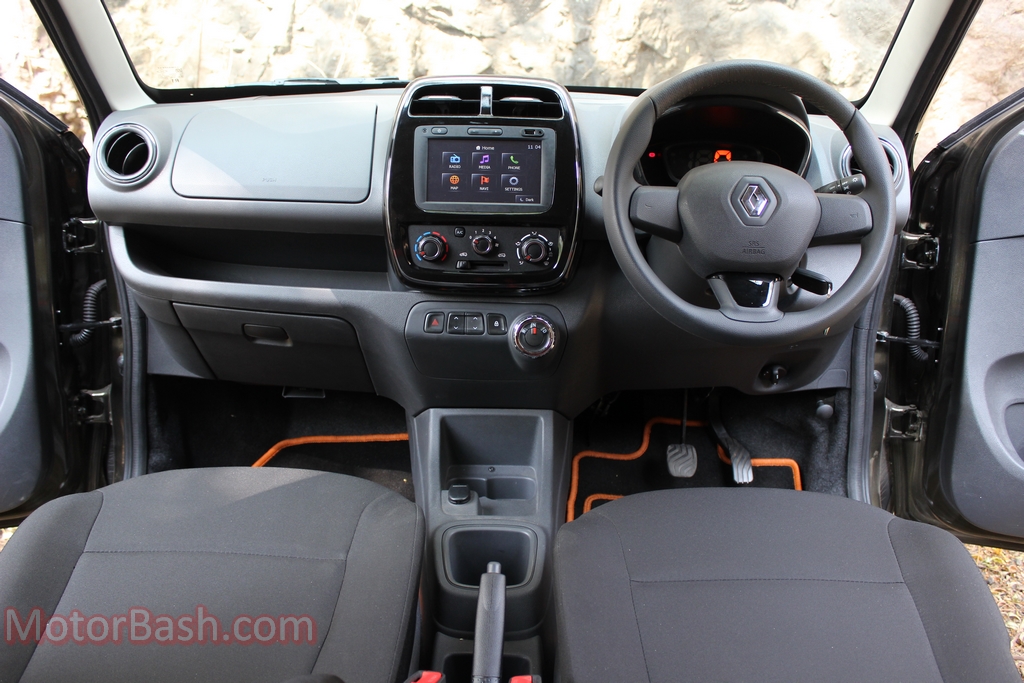 Until you do that though, here’s my verdict: Actually, it’s a no-brainer. Really. But let me go back to the Kwid 800 to make it simpler for everyone to understand. That car was adjudged the best small car by all of us motoring journalists, and the sales figures tell us that we got that one right. So, what happens if the best in segment 800 cc car gets a bigger engine? Simple – the best gets even better. Okay, so that one was easy. And what happens when THAT car gets the best AMT gearbox in the business? This should be easier, no? Easy-R, did you just say? Yes sir, it does become easier, or Easy-R – the best automatic car in the segment today!