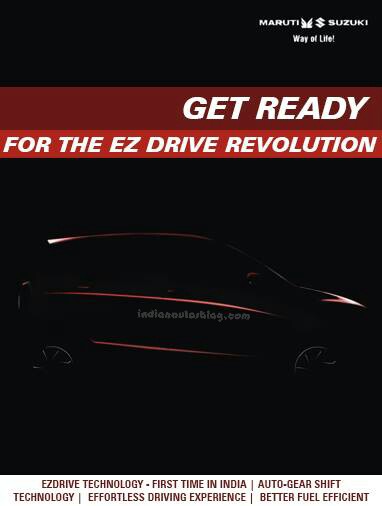 Maruti is rolling up its sleeves in preparation of the launch of its brand new small car – Celerio. From the last report we understand that the car is equipped with what’s being termed as an AMT or automated manual transmission.It will make the car easier to drive and which in turn would mean that we will be seeing more lassies behind the wheels and which inevitably would mean…ahem…excuse me, got a call. Be back in a minute.

Remember what Kinetic Honda did to our two-wheeler landscape? The new clutch-less AMT Celerio intends to do the same for the four-wheeler market. Not all is disquiet and worrisome though.

Celerio will be the first car in our country to be equipped with the AMT as a company fitment and these snapshots (courtesy Indianautosblog.com), are the first official teasers for Celerio. These pictures reveal that Maruti is referring to the clutch-less AMT as “EZ Drive Revolution”. AMT systems, while being convenient, are also more fuel efficient than the manual transmission. It is easier on the pocket to have one too. The AMT system is more economical to buy than the fully automatic transmission systems.

Ashok Leyland, by the way, has introduced the AMT in their commercial vehicle named ‘BOSS’. All one does while using the system is tap the gear lever forward to upshift and nudge it backwards to downshift. There isn’t any clutch pedal, so you can give your left leg all the rest it deserves.

This system is the USP of the new car from Maruti poised to replace the A-Star and Estilo. The adverts have started showing up and it will be a matter of days before we start seeing Celerios in our neighbourhood Maruti showrooms. Until then you can teach your soon-to-be-free left leg some productive, new tricks.