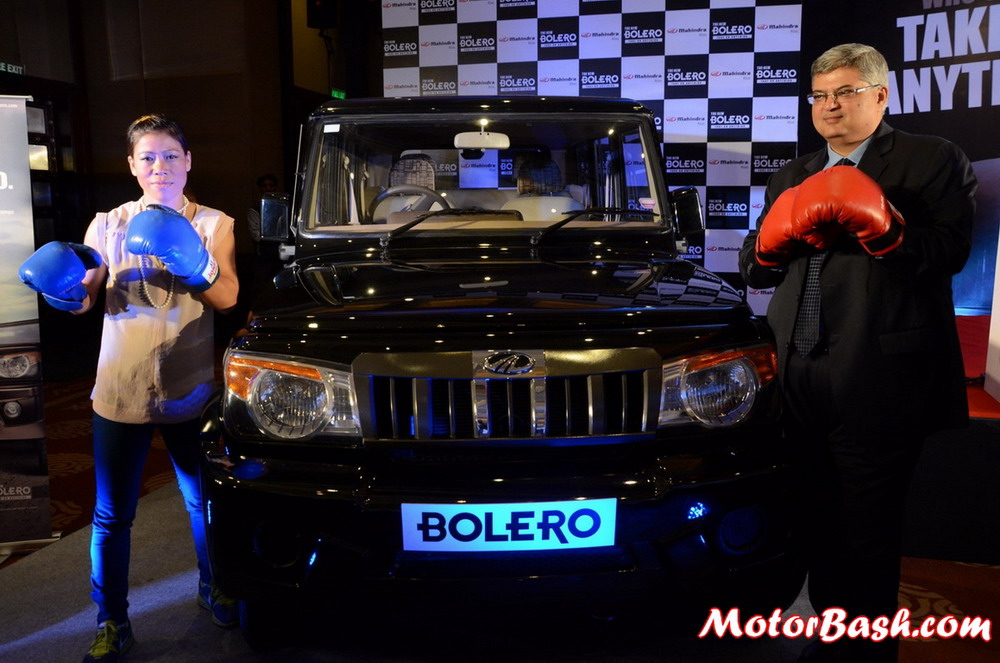 In order to encourage and felicitate MC Mary Kom, who won India a Bronze medal in Boxing in London Olympics 2012, Mahindra has gifted here a Bolero.

Mahindra says that this felicitation symbolizes association of two strong entities which have the power of ‘Taking on Anything“. Here is the press release of the event.

The felicitation symbolizes the association of two strong entities both with the spirit of ‘Taking on Anything’  – ‘MC Mary Kom’ and ‘Mahindra Bolero’. Built to take on anything from bad roads to bad weather, the tough and rugged Bolero is a perfect match with Mary Kom’s ability to boldly take on competition in the boxing ring.

The ‘Mahindra Bolero’ is an ideal vehicle for India’s champion boxer, who, with her explosive performance at the recently concluded London 2012 Olympics, personified the Bolero attitude of ‘taking on any challenge’. In fact, Mary Kom is the epitome of Mahindra’s RISE philosophy by storming an otherwise male-dominated bastion by ‘Accepting No Limits’. She is also ‘Driving Positive Change’ – another element of Mahindra’s RISE ethos by altering society’s perception of what a courageous, confident and determined woman can achieve.

Presenting the keys to the Olympic medal winner and 5 times world boxing champion, Mr. Vivek Nayer, Chief Marketing Officer, Automotive Division, Mahindra & Mahindra Ltd. said “We are proud to be associated with MC Mary Kom. She has become a role model for the youth in India who wants to excel not just in sports but in any arena. Fighting all the odds to come out on top, she clearly symbolizes the ‘take on anything’ spirit of the Bolero SUV. With its rugged looks and plush interiors, the all-conquering Mahindra Bolero is the ideal choice for Mary Kom to make a personalized style statement.”

While receiving the keys to the vehicle, MC Mary Kom said, “I am very pleased to own the Bolero and I thank Mahindra & Mahindra for this very special gesture. With its rugged looks and power-packed performance, the Bolero is indeed a great compliment to my personality and I am looking forward to owning and driving this stylish SUV.”

Despite being an Olympic medal winner and 5 time world boxing champion, the holder of 3 Asian titles and 11 national titles, an Arjuna Award winner, a Padma Shri Award winner, a Rajiv Gandhi Khel Ratna Awardee, Mary also fulfills her roles as a mother, wife and daughter, with complete élan.

The Bolero is India’s No.1 SUV for 6 years in a row, a validation of the superior value proposition it offers along with its ability to traverse all kinds of terrain.

Since its launch in August 2000, the Bolero has evolved significantly, incorporating a host of features and aesthetics in line with the changing lifestyle and aspirations of Indian consumers. Mahindra has kept up its momentum with constant product upgrades and new offerings, having launched the ‘New Bolero’ recently. Powered by the refined, peppy new m2DiCR engine with better driveability and excellent fuel efficiency, the New Bolero, sports more macho front styling, giving it an aggressive stance. It also incorporates new technology features like Advanced Digital Display with Driver Information System (DIS) and a digital Engine Immobilizer, all- new stylish dashboard, new wood-finish central console and all-new seats and upholstery.

The Bolero is yet again the highest selling SUV in India for the 6th consecutive year with sales of 1,00,686 units during FY 2011-12, as against 83,112 units during FY 2010-11, registering a growth of 21%. This is by far its highest ever annual sales since launch. The Bolero has also notched up the 5th position among the top selling passenger vehicles in India YTD August 2012, moving up from 7th in FY2011 – 12. What is significant is that the Bolero is the only SUV to feature among the top 10 selling passenger vehicles in India.

The brand’s popularity is also visible in the online space. The Mahindra Bolero community on popular social networking site, Facebook, has over 8 lakh fans sharing their adventures and experiences in their Boleros. The YouTube channel of the brand has received more than 2 million views. Bolero has also been associated with popular celebrities such as cricketers Gautam Gambhir and Robin Uthappa who own a Bolero Stinger and a Bolero Special Edition, respectively.