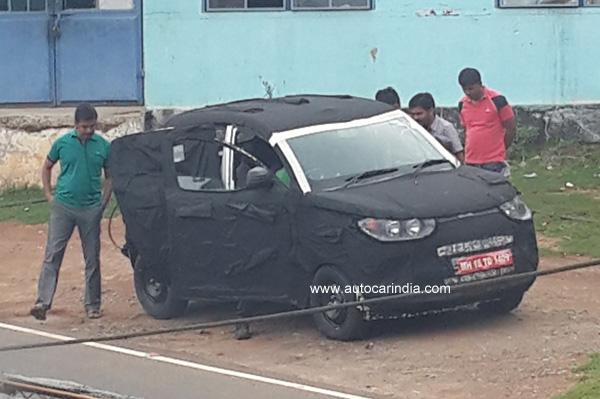 Mahindra and Ssangyong are jointly working on an all-new range of petrol engines which would find home in both Mahindra’s as well as SsangYong’s products. The new engine line up will comprise of three new mills and will range from 1.2L to 1.6L according to Autocar.

The smaller 1.2L mill will be a three cylinder engine while the other two will have four cylinders. The first car to get these engines from Mahindra’s stables will be S101 & S102. We have talked about the S101 extensively and it will be an EcoSport rivaling compact SUV. On the other hand S102 is touted to be a more premium version based on the same platform.

This 1.2L petrol engine in question is a smaller version of a bigger motor, possibly the 1.6L. One of these engines will also be used on the upcoming X100 SUV by SsangYong.

Apart from this info, Autocar has also shared a spyshot of the S101/S102 which, for the second time, has been snapped with production headlamps. What we notice are the double-barrel headlamps, tall body proportions and tiny tyres (in comparison).

The headlamp, and in fact the complete front face has an uncanny resemblance with the XUV500. The S101 (and possibly the S102 will also) be placed below the Quanto and should have a much better build quality than Mahindra’s earlier products. Now it remains to be seen how much power the tiny three pot mill will be able to produce. But it should be ideal enough to pull the soft roader in the urban scenarios it is going to commute mostly on.

The fresh engines will be Euro 6 ready and are being developed at Mahindra’s Research Valley, near Chennai. The company has even brought in experts from AVL (Austrian powertrain specialists) to get the project right! Launch of S101/S102 is slated for next year.