In two completely different incidents, Mahindra’s upcoming S101 Compact SUV has been spied at two different locations, one of them being Punjab. One of the sightings was done by a reader of Indianautosblog.com whereas the other spyshot comes from Motoroids.com. In both the spyshots, the test vehicles are heavily camouflaged and covered from head to toe, and hence do not reveal much about the upcoming Compact SUV. 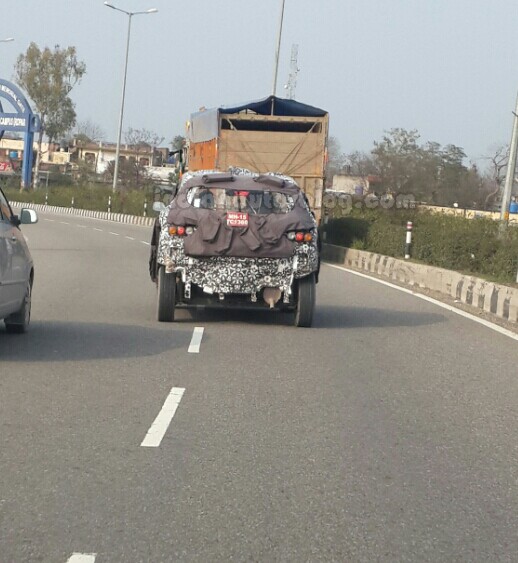 Similar to all the previous test vehicles, the S101-on-Test did not have rear bumpers. It was fitted with dummy light setups at the rear. Decked up in camouflage, it made discerning of details nearly impossible but we do see a few design lines in the following pic. The test vehicle was not alone and infact a fleet of similar vehicles was sauntering along the highways of Chandigarh, and they were accompanied by a 2014 Scorpio facelift prototype (not in pics).

The second spyshot comes from a Motoroids.com reader named Aaron Vimal, and it provides us with a rear three-quarter’s view. Exactly similar to the other spied test vehicle,the vehicle lacked a rear bumper (so what is with this mysterious rear bumper?). Here is what we already know about the Mahindra S101 Compact SUV:

Not just the S101, Mahindra is also working on a more-luxurious platform called the S102. The S101 is actually the first of the three next-generation platforms being developed by Mahindra and Ssangyong for their upcoming vehicles. Official word from Mahindra has pointed out that the launch of the S101 could take place sometime next year.

Also Check Out: Menacing Mahindra KOMODO SUV Concept; Bet it can NOT be any more Rugged! [Pic Gallery]