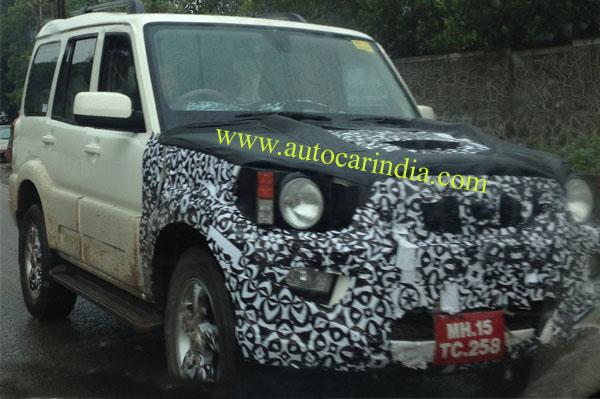 Just yesterday camouflaged pics of Scorpio facelift made way on to the interweb and today we have a front revealing (but still camouflaged) shot of the upcoming Mahindra’s ace courtesy Autocar India!

With this new shot and the revelations made by Autocar, our confusion also gets cleared. A while ago, Pawan Goenka shared that they will launch a refreshed Scorpio towards the middle of this year and an all-new model next year. However, with the year almost at its dawn and Mahindra’s knack of testing their products for extra long, we understand that this is ‘everything’ what we will get.

Autocar’s report also clears this as they reveal that this Scorpio facelift, which is codenamed as W105 will be launched towards the end of next year.

Taking about the spyshot, we see that the mule is running on dummy parts from the bin and the facelift will include revamped headlamps, grille, bumper, fog lamps and possibly the bonnet as well. We have already seen in the earlier spyshots (check here) that the rear is also camouflaged and appears to be getting a we bit of refreshments.

Notice that the dashboard and the seats are also camouflaged and hence, they will also go under the hammer and what Mahindra will incorporate in the facelift; we hope it looks good. This is because the current interiors of Scorpio are absolutely bland and look age old. Autocar also reports that the interiors will be reworked for more space without any changes to the wheelbase. Therefore the car’s legroom issue in the second row will be solved.

With respect to the engines on offer; we do not see any real changes happening there. Mahindra will continue to offer the 2.2L mHAWK with an added possibility of the entry level 2.5L m2DiCR motor. Power outputs, NVH levels and driveability are expected to be bettered though.

The alloys look better and the tyres look slightly bigger. However, there does not appear to be any significant changes that the 2014 Scorpio facelift might get. Accepted that Scorpio, despite its old credentials, still sells but for how long? We expect/expected a major overhaul.

However, details are still under wraps and we hope Mahindra doesn’t disappoint. Keep tuned for all the info on this Scorpio facelift!