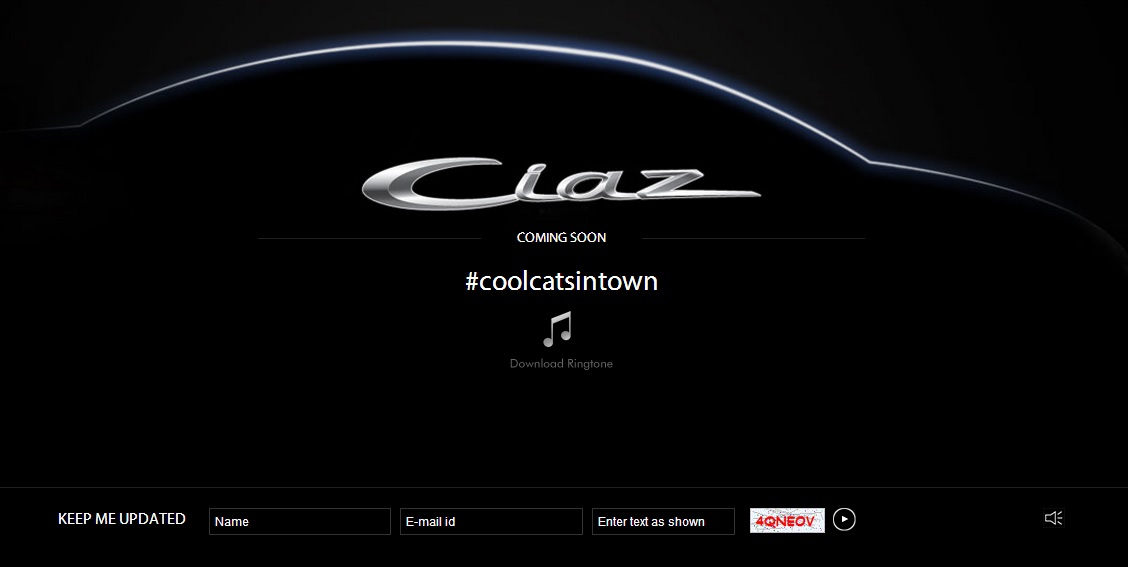 Maruti Suzuki’s attempt to enter the premium C-segment will be renewed with the Ciaz and the car which shook our idea about the company’s strict, laidback design philosophy. The concept car at the Auto Expo instantly managed to strike a different chord with the visitors, including us!

Our regular readers would remember that just a few days back we had reported that the Ciaz has gone under mass production and there are hundreds of cars ready for dispatch to dealerships.

Amidst all this, Maruti has put up a microsite for Ciaz with some music and a ‘COMING SOON’ teaser. Interestingly, Maruti has decided to use some innovative ‘cats’ theme for promotion of their car. Check out the microsite here.

They have even uploaded a promotional ringtone which has a pretty jazzy touch, about the cool cats in town. The whole song has a whole lively appeal to it and hopefully the car would also turn out to be equally refreshing. Maruti also has a Twitter hashtag #coolcatsintown to make the car popular on the social network circle.

The car is to be powered by the 1.4L K-series petrol engine from the Ertiga and the 1.3L DDiS diesel mill with VGT (Variable Geaometry Turbocharger). Ciaz seems to be slightly larger than the current segment leader, the Honda City and might just have more interior space than the rivals.

Ciaz is expected to be priced between Rs 8 to 11 lakhs, which is a norm in the segment. Being not so interesting on the engine front (specially the diesel), Maruti will have to have to make it really loaded to make a dent in the segment.

After a few failures in this segment, can Maruti pull this off?