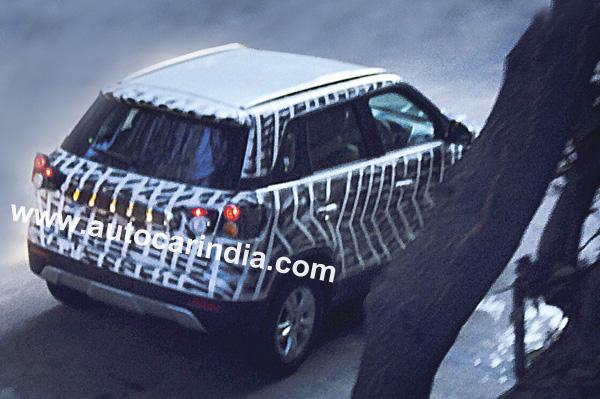 So, Maruti is going bonkers with new products. Apart from the YRA premium hatchback (which will sit over the Swift) and S-Cross, Maruti Suzuki is, finally working on a compact SUV YBA which was spied very recently.

In an update at Autocar, we have a new spy pic of the rear of the YBA which actually resembles nothing – neither the XA-Alpha nor the iv4 Concepts. There is no christmas-tree configuration or the flat rear like the XA-Alpha and instead, it gets a more conventional rear but it does look interesting. The tail lamps we see here appear to be dummy pieces.

But the most interesting bit that Autocar reveals is the possibility of Maruti Suzuki ditching the 1.3L DDIS in favor of the new bigger 1.5L diesel engine which will again be sourced from Fiat. Essentially a downsized version of the 1.6L Multijet, this new 1.5L diesel engine may churn out more than 100 horses of power and if it has the traditional ‘kick’ of the 1.3L DDIS, it will put the YBA a much more fun to drive car than the average-diesel EcoSport.

The question is – will that engine be ready for production by the time YBA gets launched. There is a confusion between petrol engines at this point. There are reports that Maruti Suzuki is working on a 1.0L Turbocharged petrol engine called as K10C which appears to be the best bet for this YBA. If not, then we can expect the 1.2L and/or 1.4L K-series to do duty.

Apart from this, the company may also plonk Suzuki’s AWD (All Wheel Drive) AllGrip system on this compact SUV to widen the horizon of buyers.

The production version of YBA may be unveiled at the Auto Expo in 2016 and Autocar is banking upon iV4 as its commercial name. We still believe XA-Alpha would fare better since it has already created a brand for itself! If Maruti does unveil the YBA at the Auto Expo, we can safely assume its launch sometime in 2016.