Now we did not see this coming so early! Hyundai has officially invited us for a media drive of their next big salvo in the market – the ix25 compact SUV. The media drive is scheduled towards the end of next month inside Hyundai’s Chennai plant. However, the company has cleared that no photographs will be allowed to be captured and instead, they will provide us with some official pictures of the car. Clearly, they do not want to leak a bit before they feel they are ready! This is a similar strategy they followed with the Grand i10.

The invitation mailer reads – “Media Preview and First Drive Experience Drive of the much awaited SUV of 2015 (yes SUV)!” Hyundai also tells us that they will be sharing all relevant information regarding the product. They have nowhere mentioned the name of the SUV and various reports suggest that Indian name of ix25 will be different. 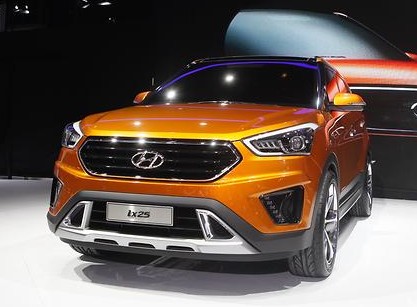 ix25 will NOT be a sub 4 meter SUV and will fight with Duster for space, instead of the smaller EcoSport. It will be powered by the Verna’s 1.6 liter petrol and diesel engines and there is a possibility of Hyundai offering the base variant(s) with the smaller 1.4 liter diesel engine as well.

Based on this latest update, there are all the chances that its launch will happen in July or August! More details as we drive the car next month… stay tuned…

1 thought on “Media Drive of Hyundai ix25 Next Month; Launch Possible in July/Aug”