I remember, as a toddler, asking my father, “Why doesn’t Mercedes-Benz write its name on its cars?” He had replied, “It does not need to…” I also noticed quite early on that it was not just the car crazy kids and adults who could recognize a car with the three-pointed star as a Merc but even your Bajaj Priya-riding average Joe could point at that logo and exclaim “Mercedes!” stressing on the wrong syllable while at it though. This was in the eighties when a sighting of a gleaming W116 would make your day, and even a glimpse of a W126 would leave you smiling for days. So, with that kind of brand recognition, image, and admiration Mercedes-Benz was on safe ground when it entered India in 1994, and its wholly-owned Indian subsidiary continues to see good times in the Indian car market at present as well.

However, the relatively-recent entrants like BMW and Audi, which stepped foot on Indian soil more than a decade later than Mercedes, did not take much time to have a product in every segment where Mercedes had presence, and then some. But the Stuttgart manufacturer went one-up again in 2012 by launching the first car on its MFA platform (which had spawned models like the CLA, GLA, etc.), the B-Class, and again in 2013 by bringing in the A-Class. 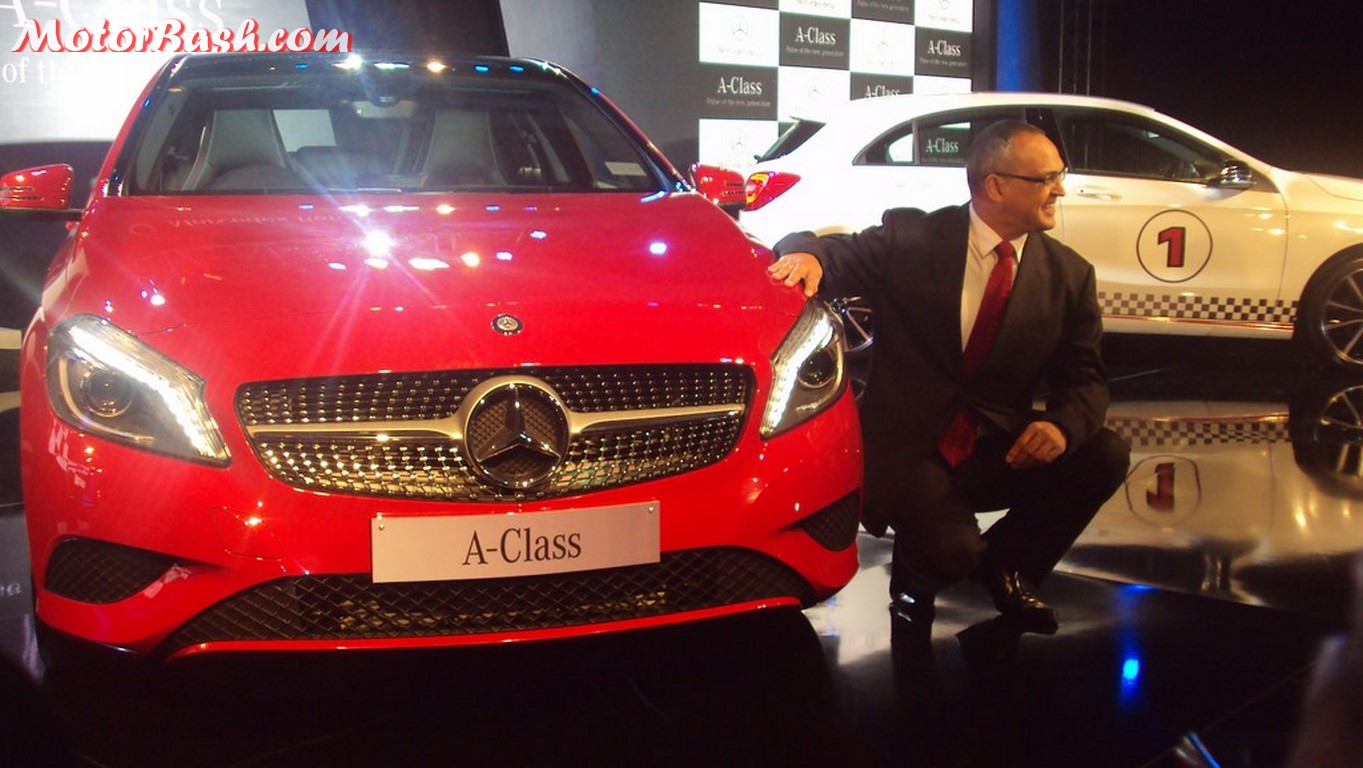 By doing so, it not only created two absolutely new segments in the Indian luxury car space, but also brought the brand within a stretched-arm’s reach of those prospective buyers who had always aspired to own a Merc but had given up hopes on swimming through the price-gap between the tri-star and a Japanese flagship… 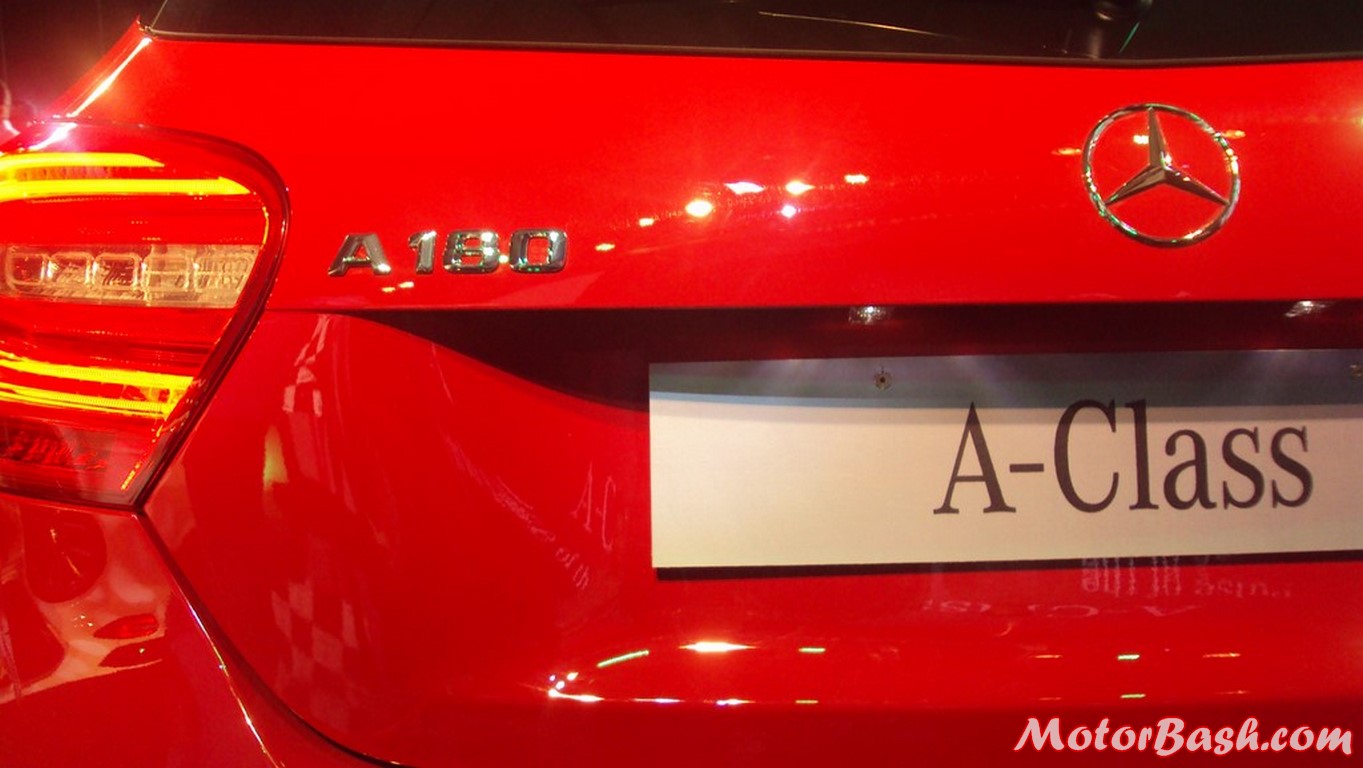 The company has since been untiringly launching more and more products (and worrying the other Germans) to its Indian portfolio, but the A-Class still remains the cheapest entry ticket to the MB world. Though the car also comes with India’s favourite type of fuel, we got to sample this baby-Merc in its petrol avatar (our favorite). We did spend some quality time with it sometime back in Pune and had one of the best photoshoots yet, only to have lost almost all the pics to a memory card crash! We could get only three pics from that photoshoot which we shared at our official Facebook page and hence we have to insert some pics we have taken at its launch.

This is the third and the latest generation of the A-Class and, without a doubt, the best-looking too. Whereas the first-gen A-Class seemed to be an enlarged Smart, the second-gen’s design team probably comprised ex-Honda and ex-Citroen designers. Mercedes has finally got it right with the latest A-Class, and how! Look at it head-on and you’ll be forgiven to think that it’s a sedan (the latest CLA, of course, borrowed a lot of design cues from this one). 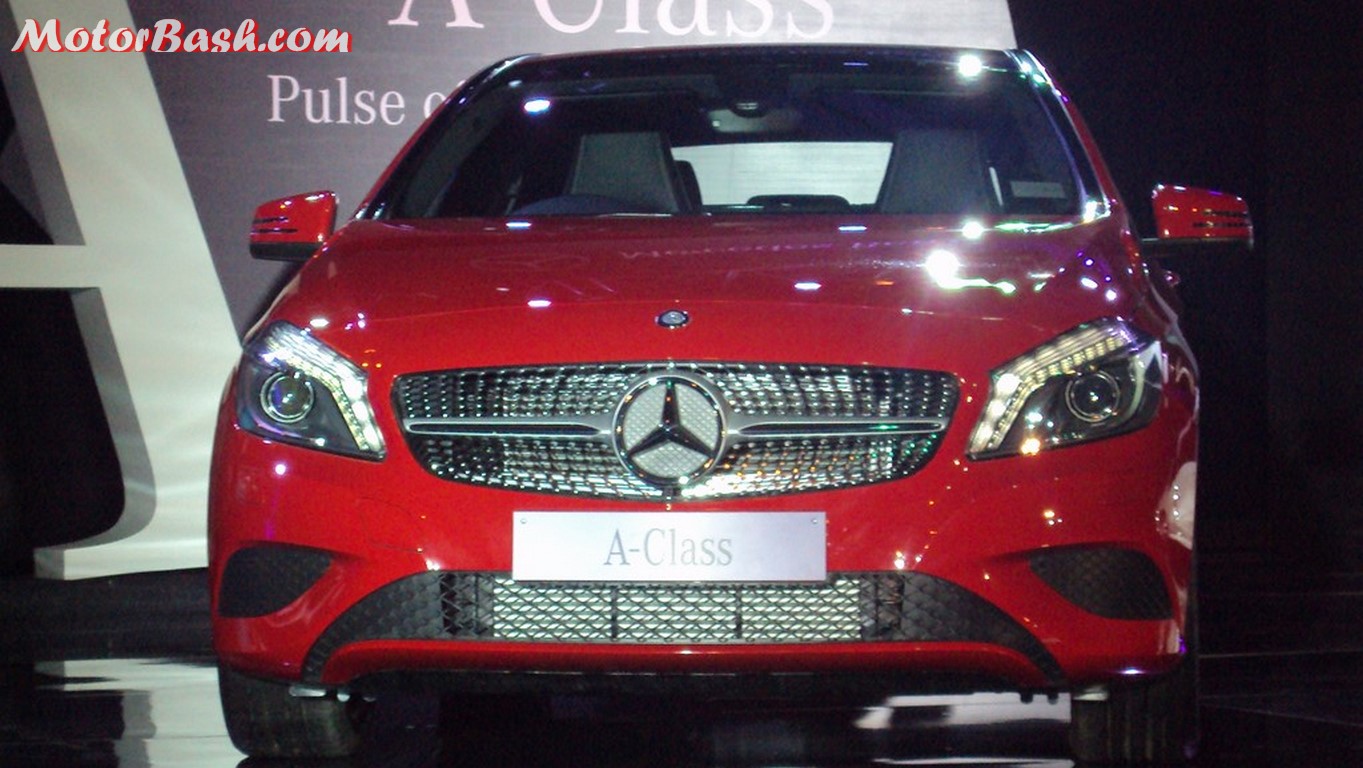 It’s only when you take a few steps back, and soak in the front three-quarters view, do you get to know that the car is a hatchback – a long, low, and muscular hatchback. Yes, it’s not a small car. In fact, it’s as big as some C-segment saloons. The media car was a red number and that is the colour I would want my A-Class to wear too. The petrol comes only in Sport trim that gets you a bling grille with 302 diamond-shaped aluminium pieces strewn together and a big Mercedes star at the center. And those headlamps, with the ‘Flare Effect’ daytime running lights and Bi-Xenon units, look intimidating in good measure. 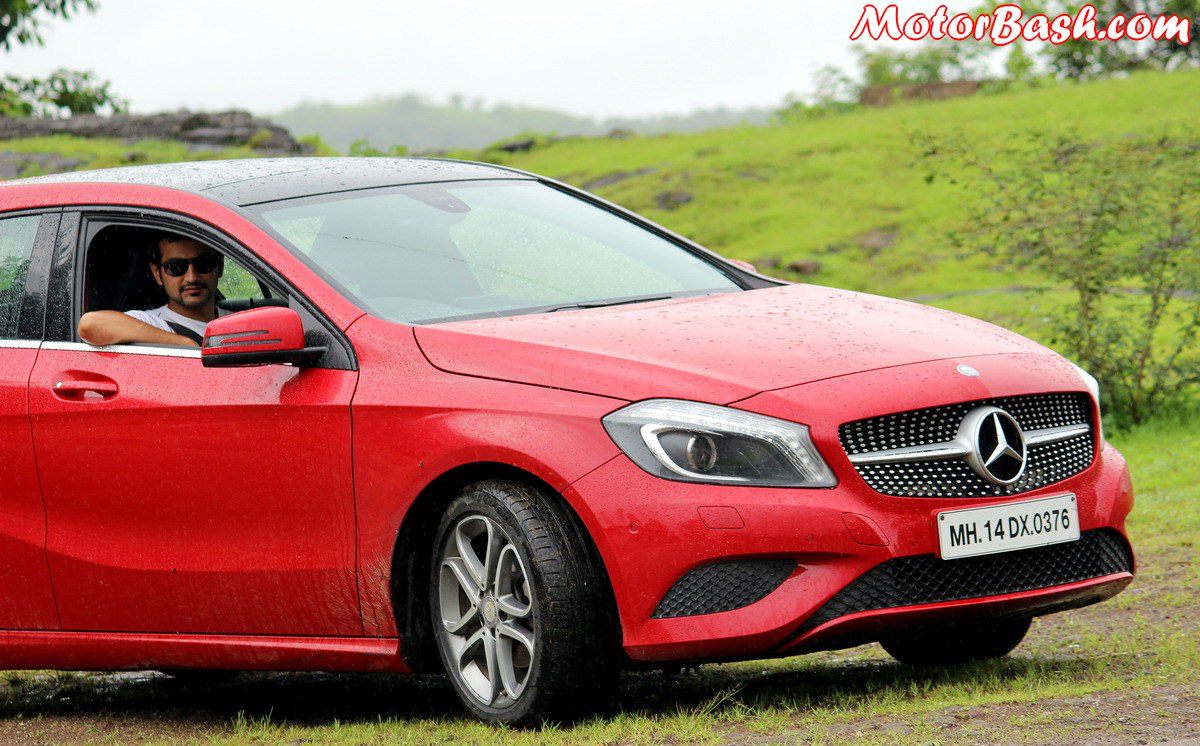 The long hood gives the impression of hiding a really powerful engine in there while the slash-cut lines on the sides along with the sloping roof give it a very sporty character. The rear continues that sportiness with two exhaust pipes, a roof spoiler, and a short windscreen. 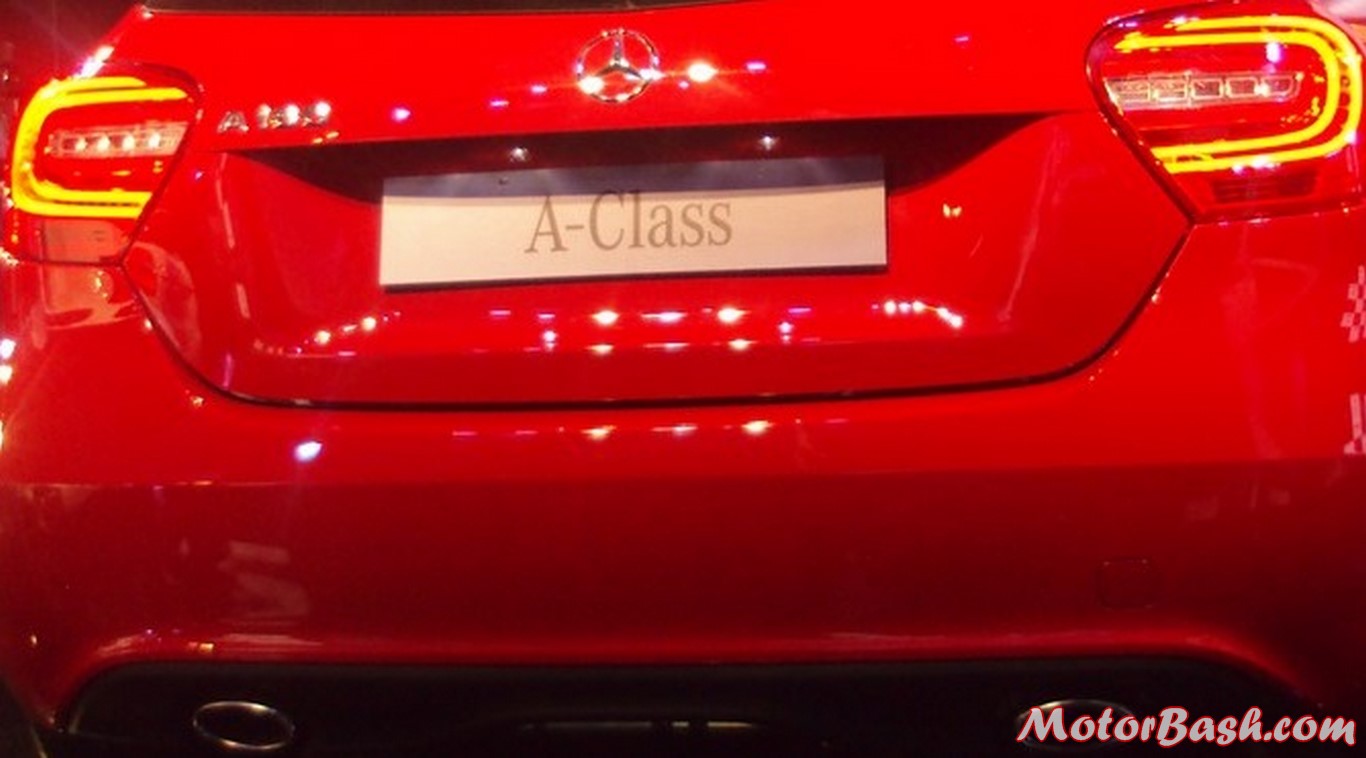 The car comes with gorgeous 17-inch wheels with low-profile rubber – again highlighting the sporty intentions of this A-Class. 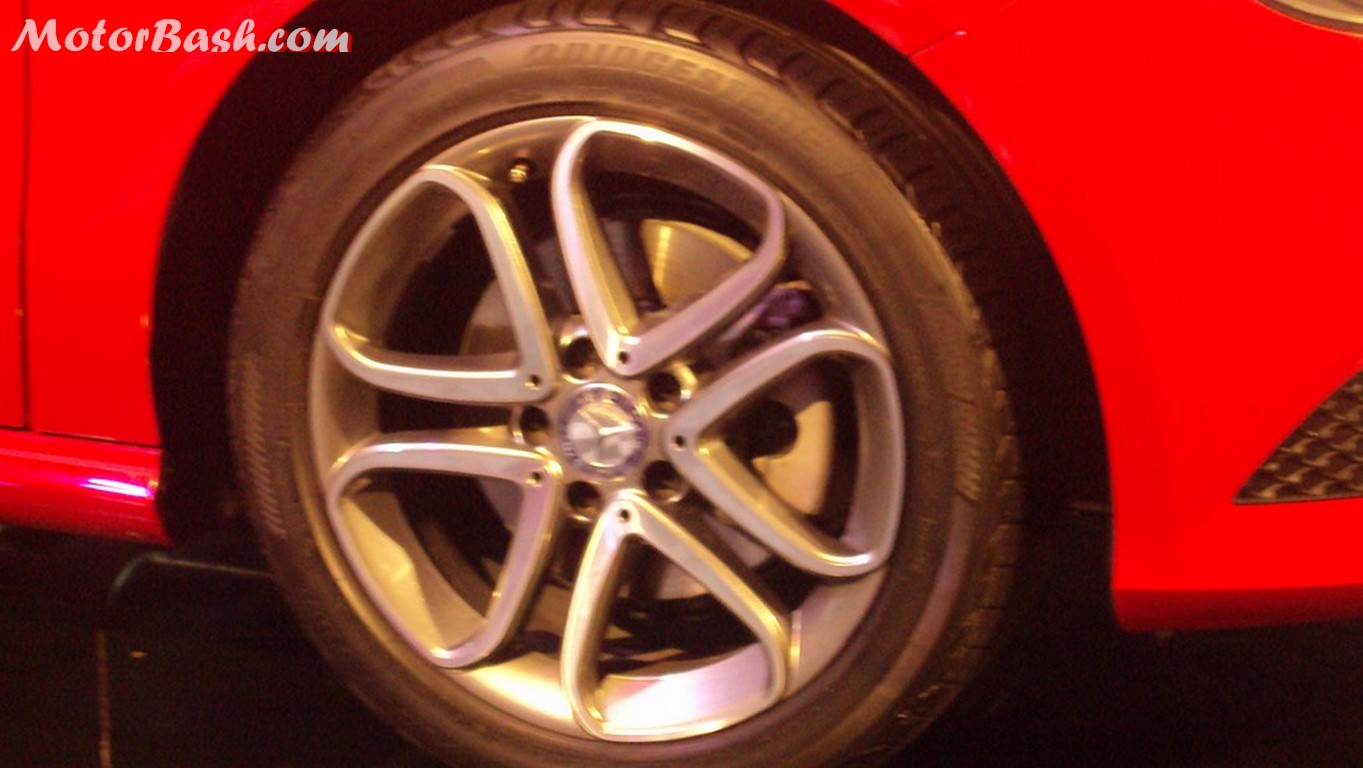 The car’s design emphasises Merc’s traditional attributes of solidity, class, power, and sophistication without losing the youthful vigour in the overall scheme of things.

This may be the cheapest Mercedes that you can buy (the diesel variant is still cheaper) but, thankfully, it does not feel like that in any way. Step inside and the feel-good factor rises exponentially. The all-black interior looks classy and there are enough aluminium inserts that brighten things up for people who are yet to acquire a taste for the dark stuff… 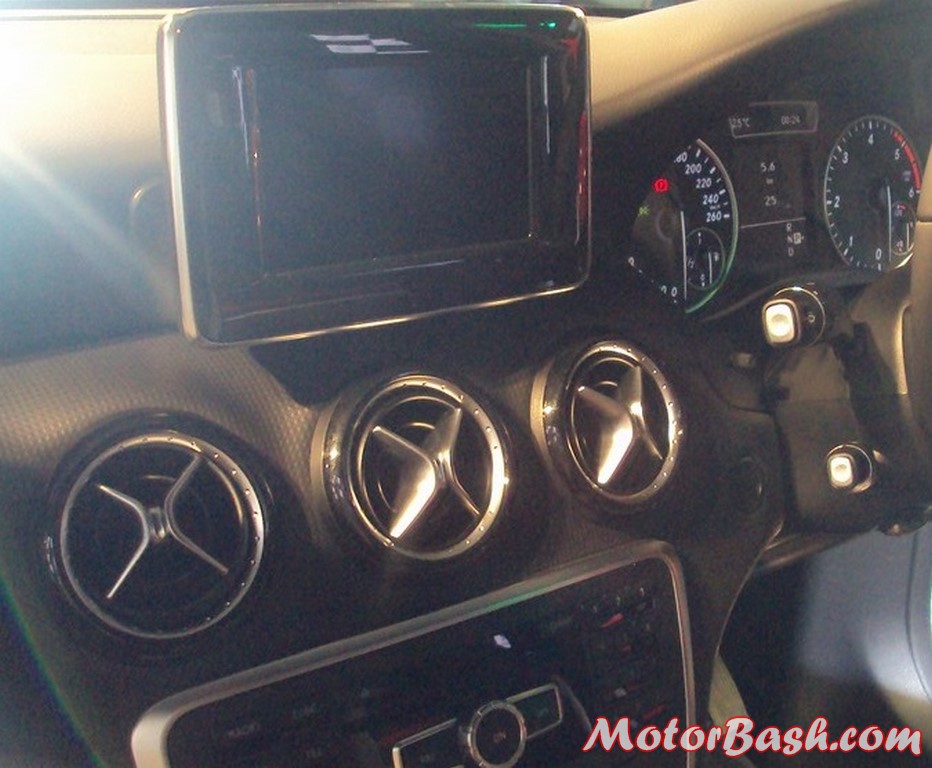 Those big air-con vents seem to have been lifted straight from the SLS AMG – a car that costs more than 2.5 crore rupees (though you still can’t buy one)! That should tell you everything about the rest of the quality which has Mercedes written all over it, period. The COMAND interface touchscreen is new and its ‘floating’ impression looks terrific. The steering wheel feels nice to hold and carries all those buttons to control your music and telephony needs; the steering is not electrically adjustable though. 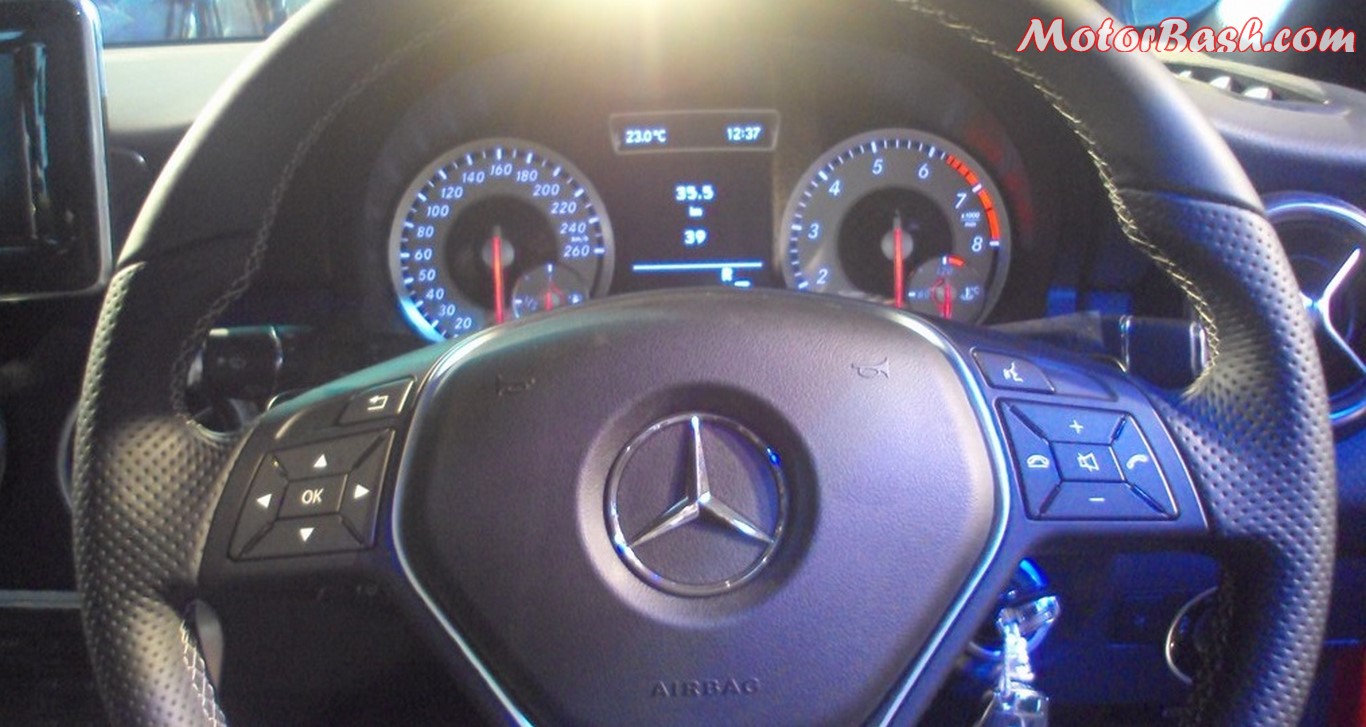 The single-piece front seats are great and have a certain ‘RS’ feel to them. As a result, the driving position is superlative which even the slightly offset pedals don’t seem to affect one bit. Having said that, shorter drivers will find reversing and driving in heavy traffic quite challenging due to poor outward visibility. A small rear windscreen, high window sills, and a sharply raked front windshield will have you tread cautiously in tight spaces. The lack of better glass area (and dark interiors) also makes sitting at the rear a claustrophobic affair. However, the standard panoramic sunroof alleviates things significantly and you can open it completely for some fresh air. The sloping roof (which looks absolutely fantastic from outside) limits the headroom at the rear and even the shoulder room is not that great. 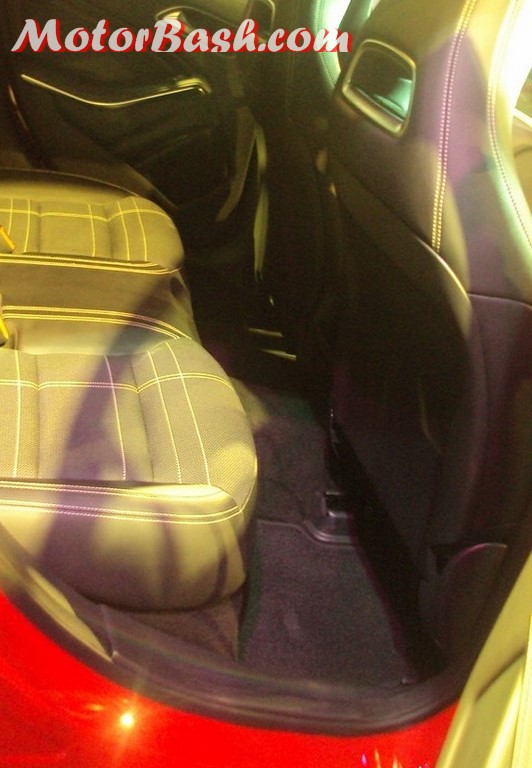 Leg room is decent but those short seat squabs hardly provide any under thigh support. Simply put, you won’t buy this car to be chauffeured in.

I don’t know why Mercedes calls the A-Class as A180 because neither the diesel nor the petrol comes with a 1.8-litre engine. The former displaces 2,143 cc between its four cylinders while the latter is only a 1.6-litre unit. Still, the four-pot petrol motor in the A-Class is also massaged by a turbocharger and is able to crank out 120 bhp and 200 Nm of torque. A seven-speed dual clutch gearbox sends that power to the front wheels – yes, it is not rear-wheel-driven like the bigger Mercs. 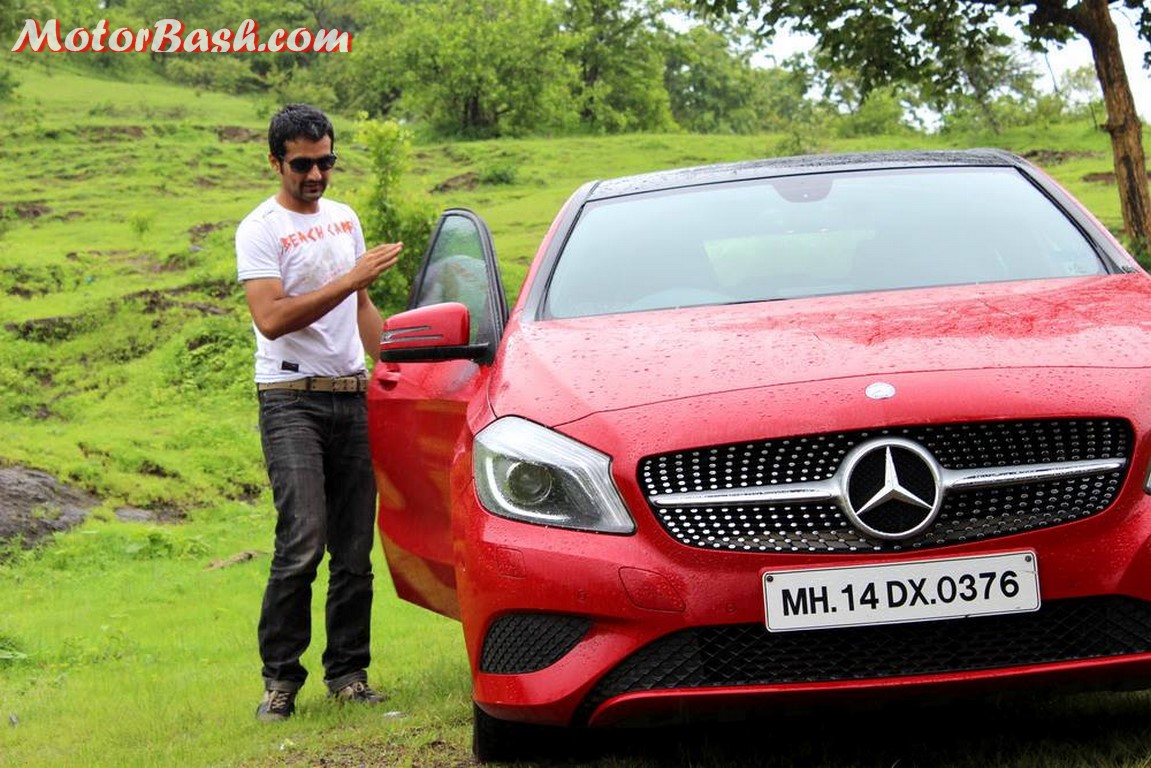 Start the car, choose ‘Sport’ via the drive selector on the centre console (there’s no traditional gear lever on the centre tunnel), foot on the brake pedal, bury the throttle in the carpet and release the brake – that’s how you post a sub 10-second time for the 0-100 km/h sprint in this one. Make that a habit and you’ll cause the A-Class to drink petrol at the rate of about 8 km/l.

It’s then that you’ll perhaps explore the other drive mode, which is ‘E’ – for Economy. Here you will get 11-12 km/l in city traffic if you drive sanely as the tranny will keep the motor spinning under 3,000 rpm in every gear. The third mode, Manual, allows you to use the paddle-shifters behind the steering wheel, and this was the drive-mode that I enjoyed the most. Redline the car and a flick of that tiny paddle greets you with a strong surge in almost all the gears. We saw a speedo reading of slightly over 190 km/h and, though the engine gets harsh near the redline, there was certainly some more juice left in it to cross that 200 km/h barrier.

The stability of the A-Class at ridiculously high speeds (for our roads) would reaffirm that you are driving a special car. The outstanding front-end grip and the stiff suspension set-up combine to give you the confidence to keep pushing the car. And it’s not just in a straight line that the car’s behaviour is impressive; you’ll have even more fun around bends as that steering is super precise and quick. Of course, it is electrically-assisted and lacks feel but, despite some understeer, it is always spot-on when it comes to choosing the intended line.

Moreover, the ride quality is quite good despite the low-profile rubber and the suspension tune, both of which are biased towards sporty handling. Of course, on really bad roads, the passengers will take a beating, and you will also have to take it extremely slow on such roads and over the speedbreakers to avoid scraping the belly, but otherwise the car handles everything else that our roads have to offer with aplomb.

Get over that small niggle, divert your attention towards the plethora of active and passive safety features present in this car, and you’ll be more than content to know the kind of safety net all those features and electronics get together to provide. The A-Class comes with seven airbags – two ‘regular’ front airbags; two side-impact pelvis airbags for the driver and the passenger; two curtain (or window airbags) that would protect the rear passengers as well, and the seventh airbag is there to protect the knees of the driver. 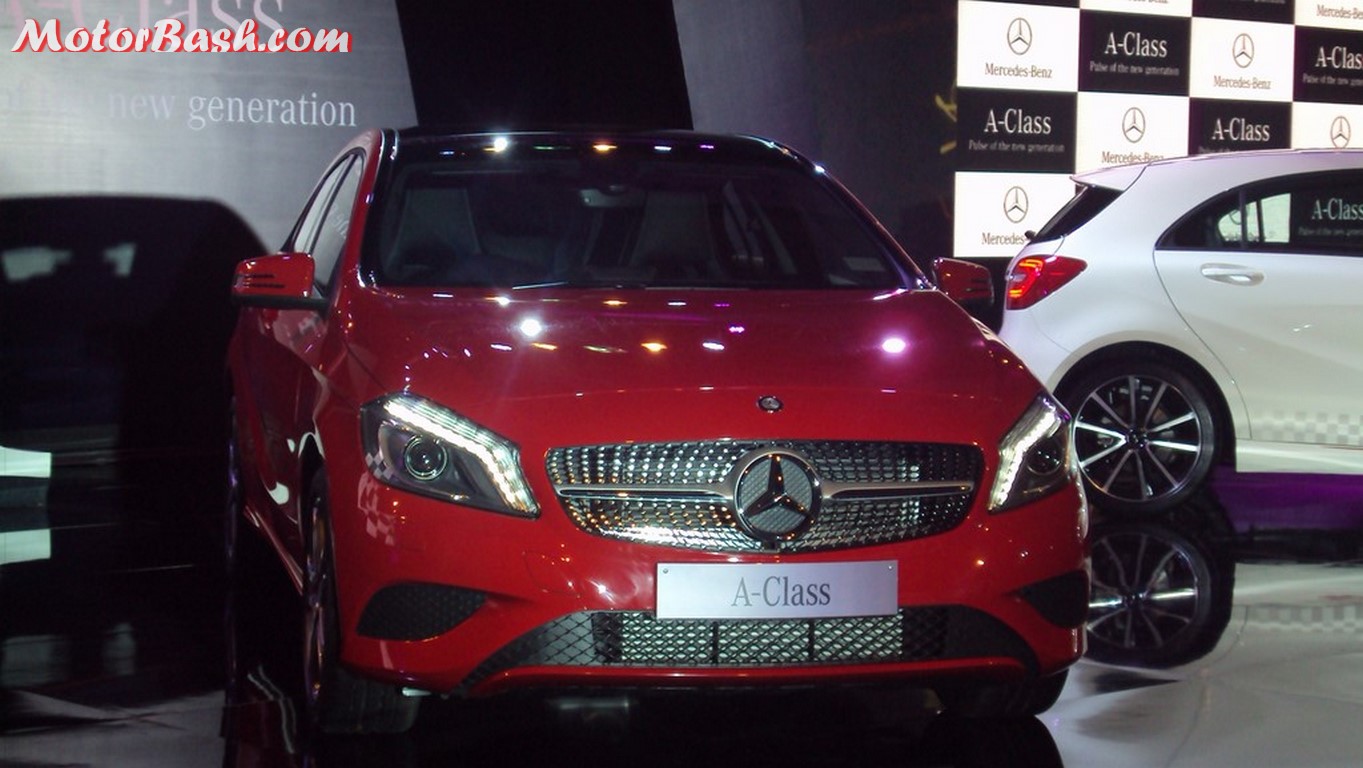 The presence of electronic aids like Acceleration Skid Control (ASR), Electronic Stability Program (ESP), Antilock Braking System (ABS), Attention Assist, Brake Assist, etc., essentially means that the driver’s license should permanently be invalidated if he still manages to crash this car (because of his fault!). Likewise, if, despite the hazard lights that come on with the rapidly flashing brake lights under hard braking, someone still rear-ends you, their right-to-drive should certainly be cancelled for life!

The A-Class comes with the Hill Start Assist with Hold function that makes starting off from a complete stop on an incline a breeze; the vehicle does not roll back even an inch. It’s also worth mentioning that both the inside rear view mirror and the driver side wing mirror come with the auto-dimming function and there’s also a warning system for dummies that detects loss of air pressure in tyres. Need more? 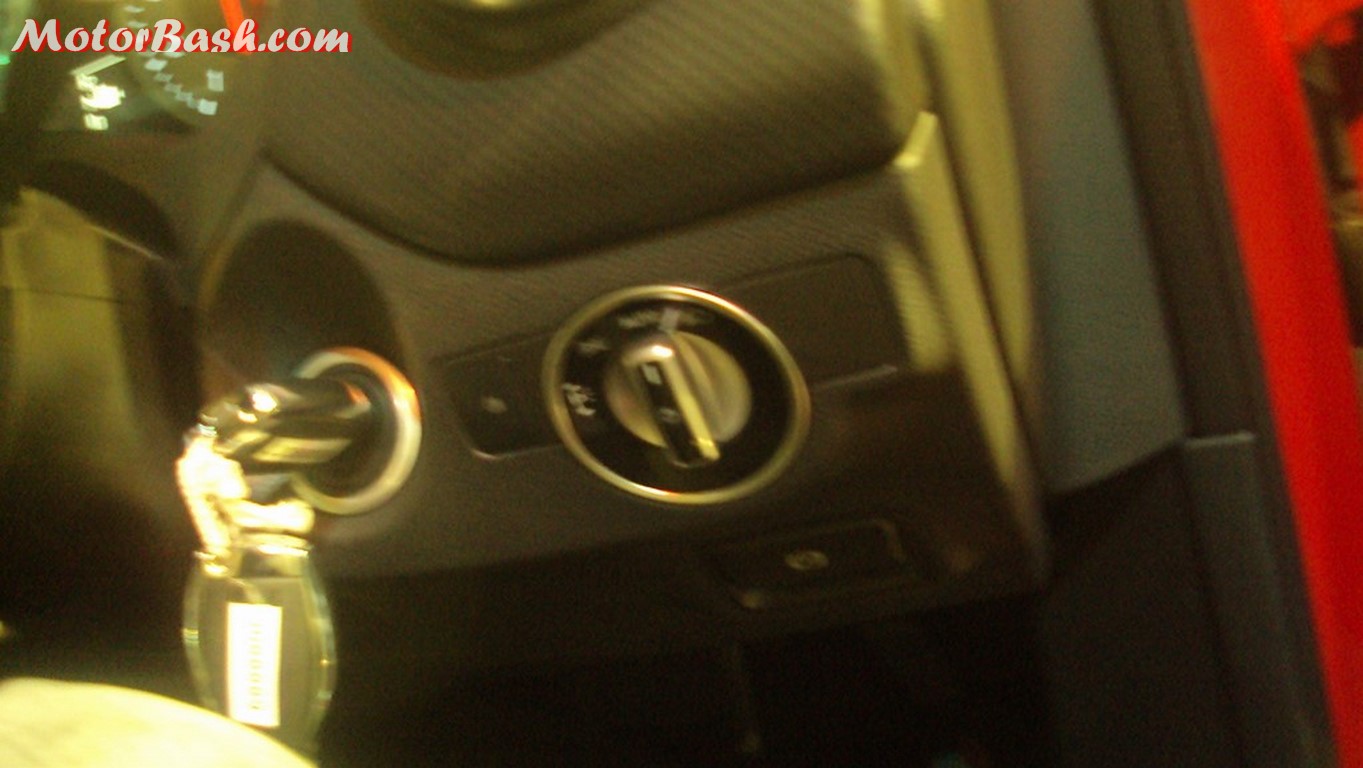 There’ also a Headlamp Assist feature that would automatically switch on the headlamps, taillamps, and registration plate illumination when the sensors register low illumination outside – so you’ll be lighting up the tunnels and underpasses without taking your hands off the steering wheel even for a second!

As I had mentioned earlier that despite the ‘entry level’ tag, the A-Class makes you feel special like a Mercedes should. The manufacturer has not taken any short-cuts and the car has the same integrity as the bigger Mercs, which means that you would never feel short-changed.

Secondly, it handles fantastically and offers decent economy too. And to top it all, it looks marvelous as well. At the time of its debut in 2012, there was nothing comparable on sale at its price point. No, even the cheapest Mini Cooper was and is still more expensive than the A-Class. Later, BMW caught on with the superb 1-Series but the lower variants of the baby Beemer are too basic while the top versions take the pricing to another level altogether, and those are all diesels (there is just one petrol model on offer and that too in one trim). Of course, the handling of the BMW is still ahead but the Merc would trump it in ride quality. And if it boils down to a feature-to-feature comparison, the A180 petrol would eat the 1-Series for brunch!

Still, here comes the best part – Mercedes would be bringing in the new A-Class soon with more power and at an even better price (possibly)! You may want to wait for it before you decide, but, if you can’t, let us reiterate that even in its current form and price there is nothing stopping you from buying this Mercedes, which also happens to be the best-looking hatchback India has seen as yet!