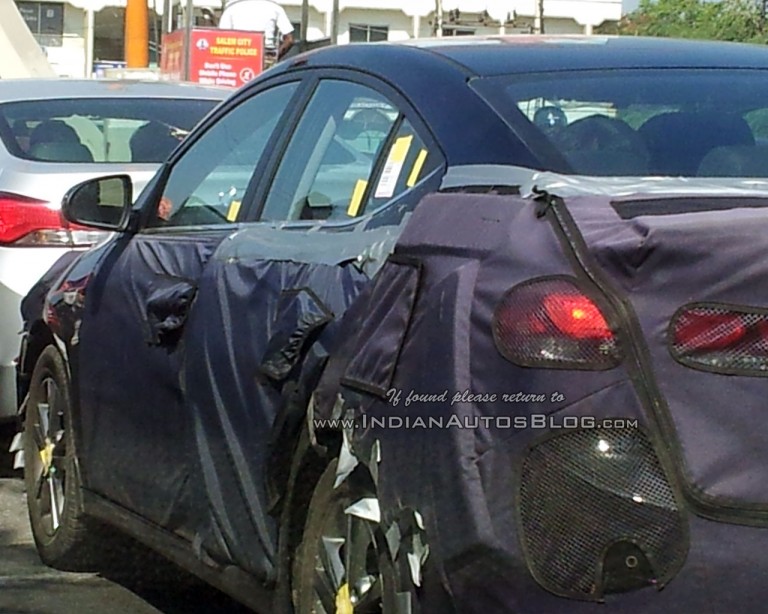 Hyundai’s portfolio in India is marked by a historic success story brewing under the overshadowing umbrella of the giant called Maruti Suzuki. Apart from the recent craze of Creta and the reasonable success of the comeback D-segmenter Elantra, Hyundai intends to continue their onslaught with the recently unveiled Tucson. Apart from that, they also have plans to bring the new 2016 Elantra to India as unearthed by its spotting here.

A camouflaged test unit of the Elantra was spied by an IndianAutosBlog reader for the first time in the country. The car is expected to continue to be sold via the Completely Knocked Down (CKD) route with small levels of localisation. The sixth generation Elantra is slightly bigger than the existing version and gets a stiffer chassis made of high strength steel.

While engine options for India are not clear yet, but in Korea it is sold with a 1.6 litre VGT diesel mill producing 136 PS of power and 300 Nm of torque mated to a 7 speed DCT gearbox. A less torquier version is also available with a 6 speed manual gearbox (produces 260 Nm). A 1.6 litre petrol mill churning out 127.5 PS of power and 154.65 Nm of torque is also available.

We would also love to see the 1.4 litre turbocharged petrol mill from the US market which comes mated with the 7 speed DCT and produces 128 PS of maximum power and 211 Nm of peak torque.

In terms of looks, the new Elantra is not as swashbuckling as the current version and is designed to appear as a more sober offering. Hyundai may launch the new Elantra in India after Tucson later this year.