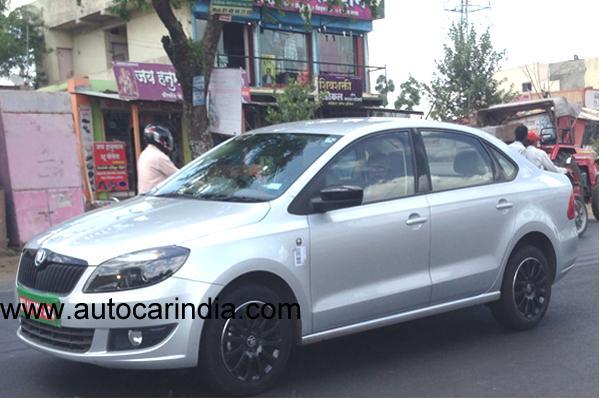 May (as in the month) this year it was when we first talked about Skoda’s new Rapid which is scheduled to get Volkswagen’s new 1.5-litre diesel engine and here is an update…an interesting one that is…

Current Skoda Rapid is powered by the same 1.6-litre diesel engine which propels (existing) Vento as well and comes with a five-speed manual gearbox. There is, however, an option of a six-speed auto on the petrol Rapid. Still, the rate at which the Rapid has been selling since the new City came out seems to be directly proportional to the speed with which Skoda is going about sprucing up the car – anything but rapid.

Autocar India reports that the updated 2015 Rapid will be launched as soon as this month on 30th September. They had spotted a Rapid mule under tests some time back and they say they have the confirmation that this is how the new 2015 Rapid will look like ie not without any significant changes to its looks.

This mule is some Special Edition of the 2015 Rapid and gets 16-inch Skoda Comet alloy wheels, blackened wing mirrors, black inserts for headlamps, black surrounds for the grille, and even black inserts around the fog lamps. No prizes for guessing that this one would/could be called as Skoda Rapid Black Edition.

This new 1.5L diesel motor has already found a place on the new Polo and will go to the new Vento facelift as well. What’s interesting is that Autocar also claims that 2015 Rapid will also get an option of a DSG automatic gearbox on this engine.

Currently, the ex-showroom Delhi prices for the Rapid hover around seven lakhs for the base petrol and around 10 lakhs for the top-end diesel. However, depending upon the variant, you may get discounts up to a lakh! In a market where it has become too obvious that people have not really applauded Skoda’s attitude towards its customers, it would take a lot more from the company to make the Rapid sell decently at least, if not rapidly…

Related: Skoda Yeti Facelift Launching on 10th September; May Be Costlier Than Ever Before