The Brio hatchback and its sibling compact sedan Amaze are set to get a minor update soon. While the Amaze still has been doing pretty well, the Brio has not really managed to be sales chartbuster. As per a report on TeamBHP, both Amaze and Brio are to get a small dose of changes to keep them more usable and fresh. And there are a few deletions as well…

Both the Amaze and Brio will get redesigned Outside Rear View Mirrors (ORVMs) which reportedly have a strong resemblance to the new City. The Brio loses the Energetic Blue shade but gets something called the Majestic Blue, which practically makes not much of a major difference. The Amaze loses the Crystal Black Pear to get a Golden Brown shade. 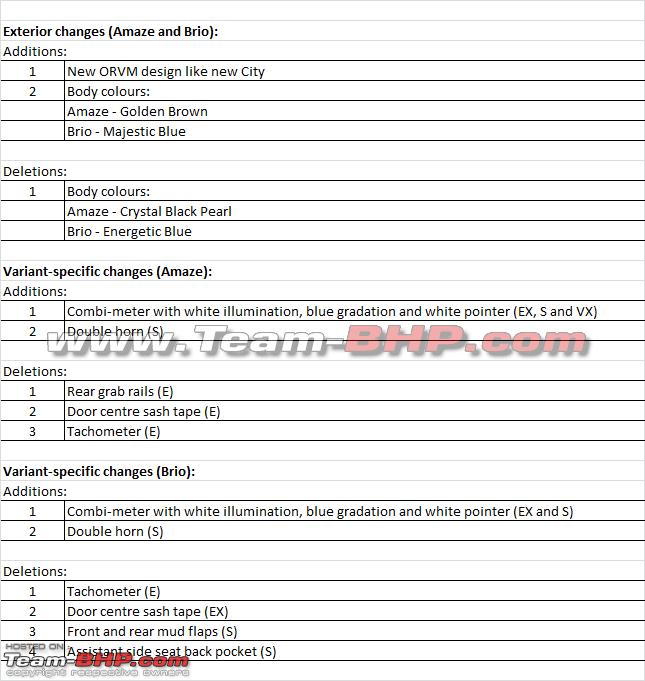 The Brio is to lose out on the tachometer in the base (E) variant, door centre sash tape in the EX variant, front and rear mud flaps, and seat pockets in the S variant.

In terms of additions, Brio as well as Amaze get white light illumination in the instrumentation console, which Honda calls Combimeter, blue gradation and a white pointer. While the Brio sees this only in the EX and S trim, the Amaze gets it in the EX, S and VX trim. Both of them also get a double horn in the S variant.

The E variant of Amaze looses rear grab rails, door centre sash tape and the tachometer. Mechanically both the cars are going to retain the engines – Brio the 1.2L i-VTEC petrol and Amaze, both the 1.2L iVTEC as well as the 1.5L i-DTEC diesel.

There is still a lot of time for the new 1.2L three pot diesel to make its way on the Brio. Both the refreshed Honda Brio and Amaze can be expected to be released any day now.