Barely a few days back we shared with you that the fourth generation Honda CR-V coming to India early next month. According to a report by The Hindu, Honda will locally assemble the new upcoming CR-V in India. This step from Honda can reduce the price of the car significantly, thanks to tax benefits.

The existing generation of the CR-V is directly imported from Japan as Completely Built Unit (CBU) and attracts extra duties due to Indian tax structure. This is the major reason behind the current high price of the CR-V.  The assembly work of the new CR-V will be done at Honda’s Noida plant.

The Fourth generation CR-V will be powered by a couple of Honda’s acclaimed i-VTEC engines. A 153 BHP (could be tuned down to 148 BHP for India) 2.0-Liter engine will power up the 2WD models and its price could start from Rs. 20 Lakhs. Another is the massive 2.4-Liter mill, pumping out 185 horses (could be detuned to 180 BHP for India). This 2.4-Liter engine will feature a new All-Wheel-Drive System, which is faster and electrically actuated. This fully-loaded CR-V could be priced around Rs. 22 Lakhs.

There’s still no word regarding a diesel engine powered CR-V and we know it is NOT coming this year at least. Correct pricing with a diesel option would have helped the company to gain in the intense competition of the segment, but recent deregulation of Diesel prices and the proposal of extra annual tax on diesel SUVs might help the petrol-only CR-V to get away with it.

The CR-V will continue to sport the existing 5-Speed automatic gearbox and we also expect Honda to retain the 6-speed Manual. The New CR-V also features a revised suspension system and full length under-body tray for low NVH levels. Nevertheless, the company has refused to share any detail of the car prior to the launch.

According to a few sources, Honda could officially launch the fourth generation CR-V on 12th of February. Meanwhile, it seems that Honda is giving final touches to the launch of the CR-V as they have officially teased the new car at their official website (Snapshot below). You can also fill up the appended form if you want Honda to contact you regarding thew new crossover. 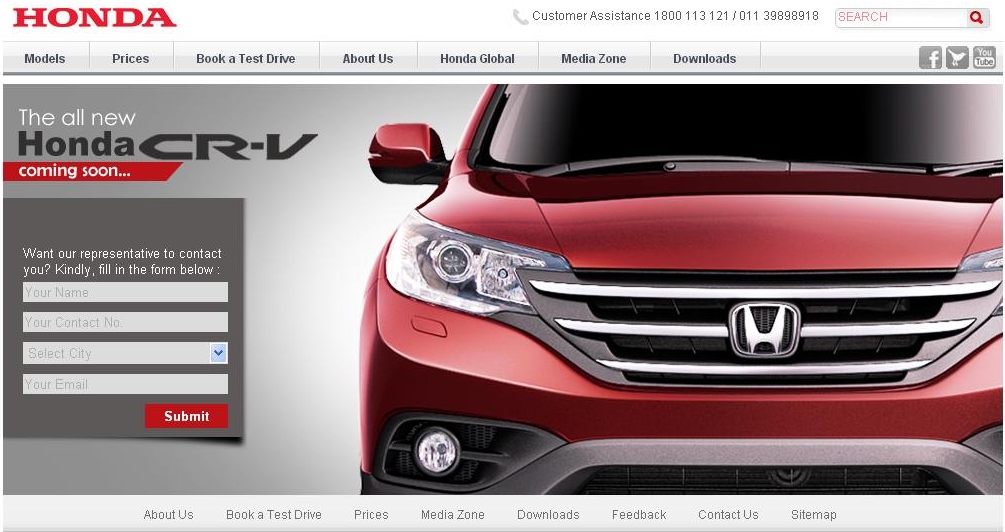 We were among the first ones to report new Honda CR-V’s spyshots from Noida back in October last year. And that is when all the confirmed build-up started reaching out to today 🙂