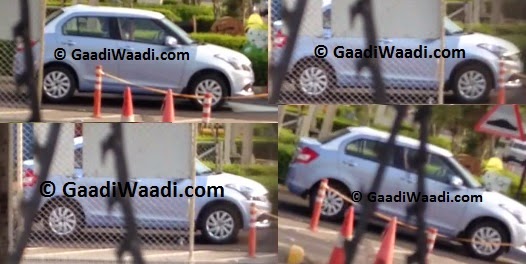 In May this year, the internet received the first spyshots of Dzire facelift with an expected launch time frame sometime this year and it seems that Maruti is gearing up to launch both the new Swift and new Dzire soon as the latter has been spied again completely uncamouflaged, possibly inside Maruti’s plant.

GaadiWaadi.com has managed to click the new Dzire in profile, albeit from a distance, but one can still spot the new headlamps, new alloy wheels, and a redesigned front bumper while it seems that the rear has been left as it is. Also, you do not see the LED DRLs (Day-time Running Lights) on this one but the top-end Dzires may get those arranged in a reverse-L shape like in the new Swift.

Reportedly, facelifted Dzire’s production has started and this may be one of the models reaching the stockyards and be parked for dispatches.

The interiors are expected to get spruced up and apart from new upholstery options, and a few chrome inserts here and there, the car is also expected to get keyless entry and push-button engine Start/Stop. A new infotainment system is also expected at least on the top end model and Maruti may also take this opportunity to hike up the prices a wee bit.

There won’t be any changes to the mechanicals and the new Dzire will continue to be powered by the same 1.2-litre petrol and 1.3L diesel engines. The petrol makes 87 PS at 6,200 rpm and 114 Nm torque at 4,000 rpm while the diesel churns out 75 PS at 4,000 rpm and 190 Nm at 2,000 rpm. Five-speed manual gearboxes too would be retained though we will not mind Maruti throwing in a surprise auto box in the mix…