Before its launch in India, there were a lot of speculations of Renault keeping prices of Duster immensely competitive.  It built a hype which was never seen before this year, but as soon as the prices were disclosed, many people who were basing their expectations on the speculations were heartbroken.

Many people turned up and started looking elsewhere and with so many compact SUVs lined up for India, the next big hope has been set on the Ford’s latest revelation – new EcoSport. We were the first ones in India to share this news about EcoSport’s first launch in the world that in Brazil.

Now, Ford has started EcoSport’s pre-sales in Brazil from yesterday and has unveiled three variants and their prices. Here they are with features of all the variants.

All features of EcoSport S plus the following

In addition to above mentioned features

All the above models are powered by a 1.6L 16V engine and there is another 2.0L engine expected prices of which are expected to over the FreeStyle EFB3. Also, deliveries will take a few months.

Initially Ford is accepting bookings for only 2500 units and the booking amount is R$ 5000 (~Rs 13,5200). Once the customer books for these intial units, the prices would remain frozen and customers would not be charged more than the promised prices.

EcoSport vs Duster in Price in Brazil 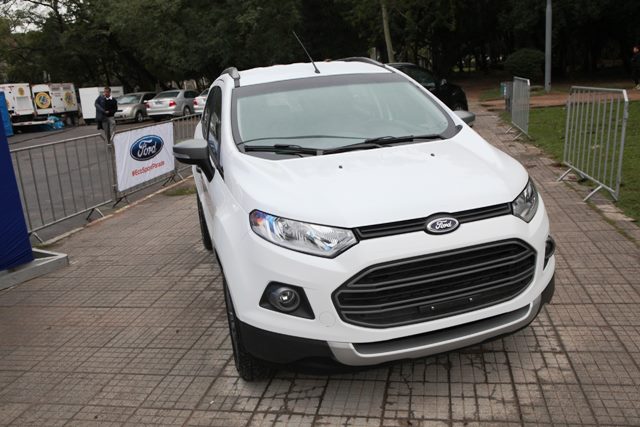 Hence the new EcoSport S is priced approximately R$ 5320 (~Rs 1.45 Lakh) higher than Renault Duster base and the higher variant is around R$ 9660 (~Rs 2.60 Lakh) costlier. Does this mean EcoSport would come at a higher price in India as well?

Well, there are a lot of differences in both the products in the two countries along the kind of market difference Brazil and India possess. No one can comment on this right now. But EcoSport would be a sub 4 meter car in India which means it would attract lesser 12% excise duty against the 24% charged for Duster.

Moreover, Ford has suffered by pricing the very potent New Fiesta at atrocious prices initially which they have to lower in order to make it sell. But despite the price drop, competitors such as Verna, City etc outsell it big time. We expect Ford must have learnt from their mistakes and would want to price EcoSport responsibly and reasonably here.

Meanwhile, Ford has already begun testing EcoSport in India, spy pics of which have emerged a couple of times at least. Also promotions of EcoSport have also commenced here and we hope that the car would be on sale sometime early January 2013.

Do check out Indian On-Road price of Renault Duster in Bangalore and Pune.

What do you feel where would Ford place EcoSport in India? Cast your guesstimate in the attached poll.

4 thoughts on “New Ford EcoSport Goes on Sale in Brazil, Priced Over Renault Duster – All the Details and Comparison”