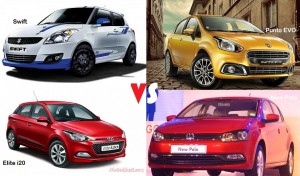 Earlier today we did a price-wise comparison for you between the just launched Hyundai Elite i20, the recent facelifts of Punto EVO and VW Polo, and the super-seller, the Maruti Suzuki Swift. Since we already told you how much you are getting these cars for, we thought it appropriate to now take a look at ‘how much car’ you are getting in return for your hard-earned money. You, perhaps, guessed it right – this would not be a detailed comparison but a simple measuring of some sheet metal and a few other basic things.

Let’s check out the specifications below of the petrol cars first:

Hyundai has axed the lone automatic variant of its i20, and with it the 1.4-litre petrol engine of that car has also been buried. So, now the 1.2-litre engine is the only choice you have as long as you want a petrol i20 only. Volkswagen and Maruti also offer their hatchbacks with only one petrol engine each but the Punto Evo gives you an option of choosing from 1.2-litre and 1.4-litre petrol motors. The former makes for the least powerful petrol engine here (68 PS) and though 1.4-litre makes 90 PS, it only comes in the top-end ‘Emotion’ trim, making the lower two variants appear a lot more accessible. Same is the case with the Polo where the plain-Jane variant makes 75 PS while the top-end GT TSI puts out 105 PS. The Hyundai and Maruti with their 83 PS and 97 PS mills, respectively, occupy middle ground.

Coming to diesels, you’ll see that Hyundai and Maruti have just one diesel engine (each) to offer and though Fiat also has only one diesel engine here, it comes in two states of tune – 76 PS and 93 PS.  Volkswagen, with the Polo facelift, has brought in a new 1.5-litre diesel engine that puts out 90 PS while fans of the now-discontinued 1.6 GT TDI will find the 105 PS put out by the same 1.5-litre engine not lacking in new GT TDI. The Fiat Multijet engine in the Swift is the least powerful here at 75 PS while the Hyundai’s 90 PS engine is par for the course. Plus, the i20 is the only car here that comes with a six-speed manual gearbox – the other diesels make do with five-speed manuals.

You would have also noticed that above despite being shorter in overall length than both the Punto and Polo, the Elite i20 has a longer wheelbase than both! The Swift is the shortest in this company and also has the shortest wheelbase. The i20 is the widest followed by the Swift and the Punto; the Polo is the slimmest here. One thing actually stands out in both the tables above, and that is Punto’s ground clearance – at 195 mm it is just five mm short of Mahindra Thar’s 200 mm! The other hatchbacks here are just no competition in this area.

Each of these cars has a lot going for itself and though most can make up their mind by looking at just the price-comparison sheet, there would still be a lot more for whom nothing less than an on-the-road shootout between these four would do. Stay tuned as that might happen sooner than you expect…