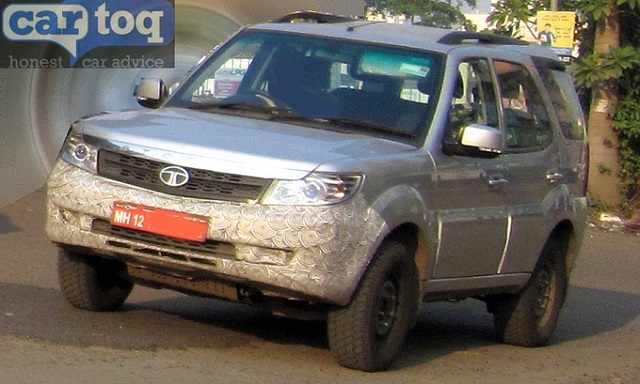 Everything is buzzing around Safari Storme – arch rival Scorpio has just got a fairly comprehensive makeover and Duster gets more equipped with an AWD (All wheel drive).

Amidst all this, Tata is working on Safari Storme facelift and this is well known. Cartoq.com has shared some new spyshots of the upcoming SUV which gets a new face which includes a redesigned front grille, more stylish (are those silver?) air dam and a tweaked front bumper.

There may be a few other minor cosmetic changes as well, but the more interesting ones may lie inside and under the bonnet. It is expected that Safari Storme facelift may borrow new Aria’s tune of the same 2.2L VARICOR engine which produces 150PS of power and 320Nm of torque along with the same 5-speed gearbox. But, like Aria, we expect an increment in fuel efficiency figures to about 15kmpl (ARAI rated).

Apart from that there will be a new infotainment system on offer and Cartoq also reports that new Storme may also get front facing third row of seats. However, they report that this test mule of Storme facelift did not sport any type of seats at the back at all. 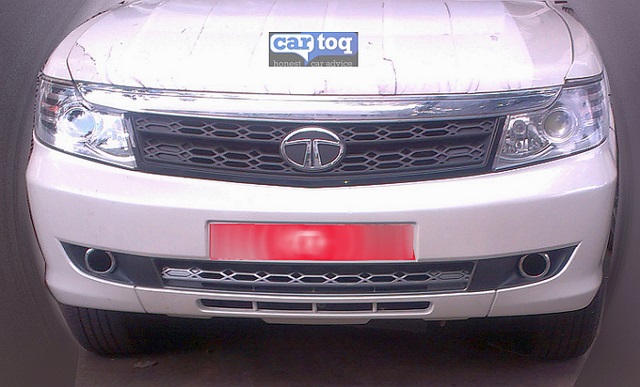 At the current moment, Tata is offering hefty discounts of over Rs 1 Lakh on the Storme and hence, a little price correction will make the new SUV a much more luring prospect amidst all the growing competition.

Earlier, we expected Tata to have launched the Storme by now, but it appears that the schedule may skip Diwali and we may eventually see the Storme facelift making way sometime towards the end of this year or probably early next year.