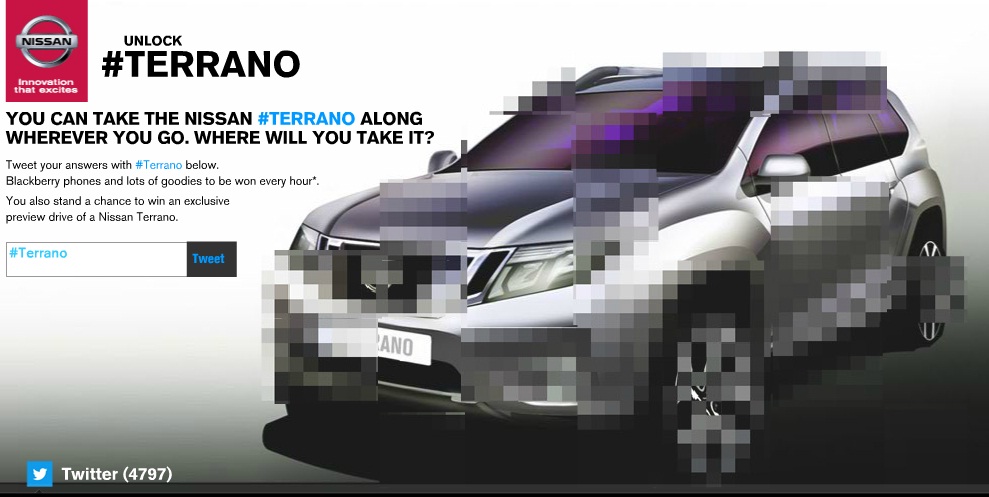 Nissan seems to have taken a leaf out of Ford’s books and have plans to ensure widespread know how of their upcoming ‘Terrano’ compact SUV which is nothing but a more than rebadged form of Duster.

After releasing the official sketch a couple of days back, Nissan has launched the official Indian site for Terrano – www.nissanterrano.in which features a pixelated image of the same Terrano sketch. Nissan is also running a contest wherein readers have to tweet their answers to Nissan’s question – “YOU CAN TAKE THE NISSAN TERRANO ALONG WHEREVER YOU GO. WHERE WILL YOU TAKE IT?”

With each tweet, the pixelated image goes clear and there are some gifts which the company is offering to lucky winners. As we are writing this, the counter has already reached 4797 tweets!

In the official communication, Nissan said that they will launch Terrano in this financial year. Going by the definition of financial year, it spans across to March 2014! However these latest developments hint at something more! Is the launch near? We get a very positive hunch that the car will be in the markets in a few months from now. It might not take Nissan more than 3-4 months before they officially launch the car.

Nissan Terrano is expected to be powered by the same 1.5L K9K diesel engine as well as the 1.6L petrol engine of Duster. What tunes/options will Nissan chose out of 3 remains to be seen. Terrano will be a pricier version of Duster under Nissan’s badge which will come with a different face and other cosmetic changes.