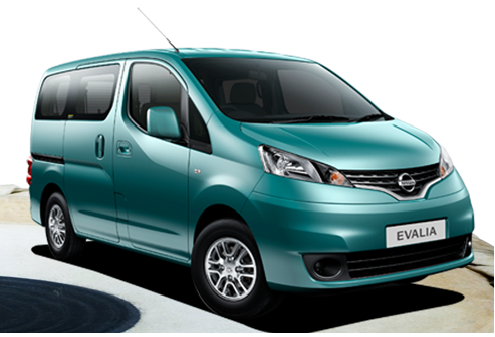 Today’s Times of India carried a huge vertical skyscraper ad of Nissan Evalia which announced the opening of bookings of the 7-seater MPV which is scheduled for an official launch on 26th September.

You can book the Evalia by paying a sum of Rs 1 Lakh. The good thing about it is that it is completely refundable in case you do not plan to go for the car after knowing all the details about it.

According to a local dealer here in Pune, Nissan has already garnered 23 bookings since morning when the bookings started.

Meanwhile Nissan has also launched a website for Evalia “http://www.nissanevalia.co.in/” where you can register for a Test Drive of the car.

Evalia would be powered by a 1.5L K9K diesel motor from Duster, Sunny and others, which would churn out 86PS of power output and 200Nm of torque.  Evalia would only be available in Diesel version for now at least.

Evalia would be made available in 4 variants – XE, XE+, XL and XV

1. Evalia XE: This would be the base variant which would come with the following features

2. Evalia XE+: This would come with all the features of XE plus the following

3. Evalia XL: This would come with features of XE+ plus the following

4. Evalia XV: This is the topmost version and would come with features of XL plus the following

The good thing here is the inclusion of safety features like ABS, EBD and Airbags from the base variants which look fairly loaded. However, Power Windows is one option that would be solely missed. These are not the comprehensive list of features.

What we know for sure is that Nissan Evalia would be priced lesser than its chief rival Toyota Innova. Though, the confirmed pricing for Evalia would only be revealed when it gets launched on 26th September, we expect it to be priced between 8-10 Lakhs. At this price range it would sit right in between the Maruti Ertiga and Toyota Innova.

Stay tuned for all the information on Evalia as we try to dig more.