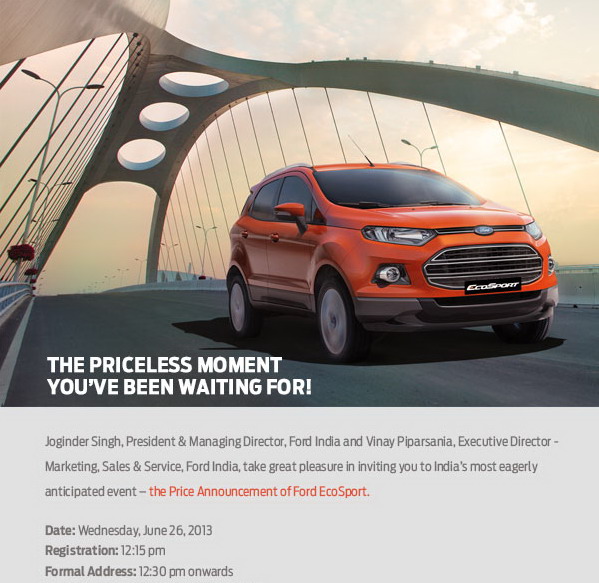 The launch will take place in Delhi and the proceedings will start at 12:15pm. Ford India’s President and Managing Director, Mr Joginder Singh along with Vinay Piparsaniya, Executive Director of Marketing, Sales & Service for Ford in India, will be present at the occasion along with other Ford’s dignitaries.

Ford understands the wave developed for the EcoSport and have specifically mentioned in the invite mailer, “…India’s most eagerly anticipated event – the Price Announcement of Ford EcoSport“. After Figo, EcoSport is Ford’s most important vehicle in India and Ford is banking heavily upon the success of the car in the Indian market.

We have known almost all the details of EcoSport, including its trims, variants, specifications, offerings, equipments etc. The last bit ie the Price remains to be seen. There have been a lot of speculations regarding Ford EcoSport’s prices. According to a few of our sources, EcoSport is expected to start at Rs 5.95 Lakh in Delhi and Rs 6.01 Lakh in Dehradun.

Its just a matter of 7 days and the wait, we know, will be longer then ever. We will be present at the venue to report the live action from ground Zero! In case you have any specific queries that you want us to ask Ford directly, do share them with us in the comments section below.

All Details on Ford EcoSport