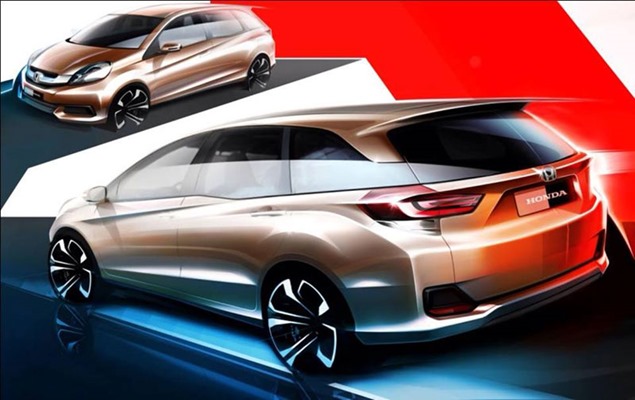 A very funky looking vehicle has been teased by Honda at its Indonesia website. Codenamed as the 2NH in Indonesia, this vehicle is categorized as a LMPV or a “Low” MPV. With a stretched wheelbase and sharply-hacked edges as well as a drooping roofline, this new Honda has got the drool-factor.

The front portion of the car, including the headlamps and the bumper, bear more than just a minute resemblance to the Honda Brio. However, it seems that the Brio has shed its baby-fat to acquire a chiseled torso.

Quite a few design elements have attempted to say goodbye to the cutesy image of the Brio. Upfront, there are the large inlets, probably covered with mesh-type grille. Similar ones are found on the rear bumper as well. A wide-body kit type of base gives the car impression of huge haunches, and the wheel arches add muscle. An interesting feature is the kink in the windowline, apparently to distract attention from the stretched-out proportions of this car, along with a floating D-Pillar.

This MPV will probably be no laggard in the engine department, as it will be powered by Honda’s 1.5L 100PS diesel motor from Amaze, enough to give the spunk. There is also the possibility of it getting an updated version of the Honda City’s 1.5 L i-VTEC mill, because it is unlikely to be shorter than 4 metres.

Though details are hazy with regards to the interiors, it could come with the Brio’s dashboard. Sources even speak of a formidable luggage space even after the three rows of seats being fulfilled. With the Honda badging, roomier interiors (expected) and a stronger mill, this LMPV could give the Ertiga a run for its money.

Honda is expected to showcase it at the Delhi Auto-Expo 2014 for India. Keep tuned to us as we try to get more dope on the future buster from Honda. This LMPV will be unveiled at the Indonesian Motor Show in Jakarta, to be held from September 19-29.