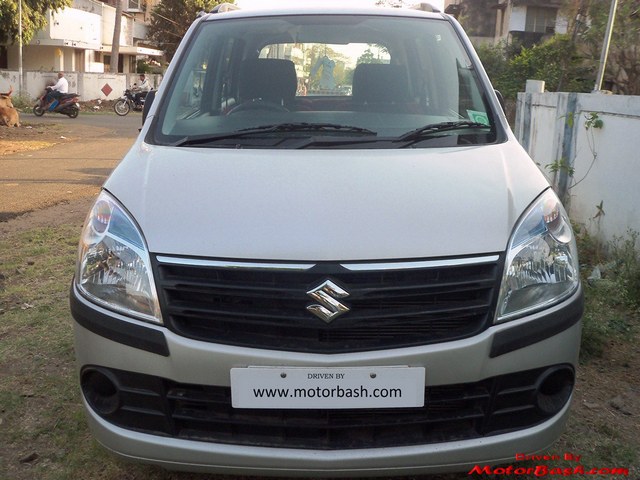 Click on any image to view it in enlarged view!

Wagon R has been a consistent war horse for Maruti ever since its launch in the late 1999. This wagon for the masses redefined getting inside and outside a car without worrying about bumping your head with the top. Although Hyundai’s Santro had introduced the concept of tall boy design first in India, it was Wagon R who took this concept ahead, blended with the trust, reliability and badge value of Maruti Suzuki. This car was a conceptual revolution, and hovered above the sales charts and hearts of its customers.

Times changed, and so did this this trusted wagon to keep up. The car saw quite a few facelifts within its lifespan, but it still kept asking for more. Maruti actually played it safe but not meddling much with the original design lines, but still teasing the customers with little cuts and additions here and there, every now and then. Nevertheless, it kept its customers happy.

For a decade this chant worked, but things changed, and so did the Indian buyer. A world where recessions and economic crisis became seasonal, people realized how dear their money was. They became more fuel and VFM conscious. Buyers in this segment could do away with performance and add the balance scale more towards fuel economy and convenience.

Came the year 2010, and Maruti finally had the courage to manipulate their successful bestseller. Enter the all new Wagon R, Maruti’s own ‘blue-eyed boy’. Maruti launched its eye candy in a new avatar, and this car followed the word ‘new’ to its true meaning. Not just regular sticker jobs, nor lamp changes, nor just a usual facelift, but this stellar car got a new shape, new engine and some new features. The car was given a new body and heart, but the mind had the same intensions of pleasing its customers.  But was it worth the risk for Maruti? Let’s find out….

Design Lines – How Good it Looks?

Maruti has given the Wagon R an Indian inclination this time, which makes it different from its Japanese counterparts. Though the tall boy design stance stays, still the design feels contemporary. The front grill is split and bonnet is chunkier. It really has got blue eyes in the form of blue parking lights! Now that’s something literal!

The head lamps are different but somewhere feel old Wagon R inspired. From the side, it gets thicker rear view mirrors on the top variants, broader running lines, silver roof rails and depressed large doors. The doors are actually large and they add to the car’s boxy personality. Why am I always reminded of a box, when I imagine of this car?

Any ways, the company has also increased the wheel base in turn improving the overall dimensions of the car. The car is now 75mm longer, 20mm wider, 40mm taller and wheel base is stretched by 40mm. looks like the new Wagon R is Horlicks inspired!

At the rear the car gets larger bumper, bigger rear lamps and its name is engraved on a broad chrome lip, right above the registration plate. The car gets rear defogger on its top variant. The larger doors may seem straight out of layman’s design book, but the ingress/egress is absolutely effortless.

Interiors – How Good it Feels?

Maruti customers are always satisfied of their business with the company, but a complaint that always remained at some corner of the head was the step motherly treatment to the interiors. Though the wagon never offered plush beige interiors, but still lively looking plastics aren’t much of an asking I suppose! The car gets some silver colored works done here and there to spice up the things, but still, isn’t silver just a shade of grey? Hmmm…

The dashboard is jazzed up with an integrated 4 speaker music system with AUX input for your iPod, circular neat looking ac controls which are similar to the previous model and circular side air cons.

A bottle holder makes its way into the dash board and a warm welcome was a tilt adjustable steering wheel.

The glove box is quiet huge and deep. The console has symmetric meters on display and covers all grounds like engine rpm, speed, digital fuel display, trip meters, alarm lamps etc. nothing is left unoffered. Smart!

The upholstery is not top notch but are seemingly upmarket and in harmony with the cars interiors.

The lxi variant offers front 2 doors power windows and the vxi offers all windows powered and electronically adjustable rear view mirrors which is a welcome treat. The air conditioner works efficiently, but if the car is to be used at places where mercury touches 50 in summers, a sun film would definitely help in cooling the cabin lots faster.

We Indians are ardent upon taking use of every paisa of the precious ‘moolah’ spent over any and everything. How could a commodity such as a car be left out of this mentality?

And the Wagon R doesn’t let down.  Even the space under the front passenger seat in the top variant has been brought in to use and has capacity to store goods, away from anybody’s notice. But on the flip-side, where we have new places to store goods, the actual place to store goods is puny. Yes, it’s the boot space we are talking about. It is really insufficient and you seldom find yourself leaving some of your luggage behind. The previous model offered ample boot space, for heavy packers.

The seating is comfortable and offers good support.

There is ample knee room and leg space for the passengers sitting behind, even after there is a tall driver sitting to his comfort, with the front seat pushed back. The car is elongated upwards, offering best in class head space and vertical advantage.

But the problem here is there is no much horizontal advantage here, on the contrary, the car ends up feeling narrow and an extra passenger in the back seat would be highly uncomfortable for long journeys, unlike the previous model, which was happy to welcome 5 passengers.

Performance – How Good it Runs?

The older Wagon R was indeed powerful and packed a lot of thrust in to a small package, which brought out the eagerness of the car naturally. But as fuel prices started to soar, customers to this segment sorted out more to mileage. Not that the previous model didn’t return decent figures, but still, some more miles for the same money is not greed! and if it is, then I am greedy, and there is nothing wrong with it 😛

The above fact altered the 4 cylindered 1.1 liter F10D Suzuki engine into a well-known 3 cylindered K10B engine, which now produced 68ps power and 90Nm torque, compared to the former 64ps and 84Nm respectively. The engine is downsized though, with the 1061cc engine giving way to the smaller 998cc engine. But keeping into mind the car is primarily a city commute, this change is acceptable. The engine is still peppy, and you hardly come to know of the difference. Still a consequence to this is evident when we move from technical specifications on the paper to the actual metal on the road. When you would need to shift the gears every now and then in heavy, slow moving city traffic.

Caught into heavy traffic, it may create haste, still, nevertheless, its very city friendly, and reserves decent punch also for the highways. The car reaches 0-100kmph in hair over 16 seconds and manages a top speed of 148kmph. PERIOD.

One of the most prominent complains of Wagon R owners were its notchy gearbox which was indeed irritating. Maruti has replaced the old rod link unit by the 5 speed cable link unit gearbox, which now feels well slotted and smooth in place. The gearbox is the same as in A-star, but seems a little long to throw because of its longer gear lever.

Handling & Dynamics – How Good it Controls?

Good maneuverability is one of the important traits that buyers in this segment look for in their cars, and this is where Wagon R shines bright. The new suspensions supplement the drivability of the car. The steering wheel isn’t smooth and light anymore but gives good feedback when this car is thrown hard on the corners. The car is even taller now, and its affinity to rollover and sway at higher speeds is still there, and would probably haunt it till eternity, still if it helps, the cars feels well planted on the road at higher speeds, and delivers a supple ride experience.

Being a city oriented car, the suspensions are on the softer side. At lower speeds it complements the ride, but as speed increases, the ride gets all ugly and bumpy, throwing the passengers inside of track. But being a city committed car for the most of the time, and flirting sometimes with the highways, the 0-100kmph figures and top speeds are not of much concern.

Not the kmph but the kmpl figures would make more sense to the customers in this segment. The main reason for Maruti Suzuki to bring in the K series engine into this car’s already proven score card was fuel economy. With an ARAI claimed mileage of 18.8kmpl overall, giving 26.3kmpl on highways and 16.3 within the city, the car has found a sweet spot with the most fuel efficient  cars in the country.

The new Wagon R is safer than ever with new features that make sure to take care. The top variant comes with driver airbag and ABS. these features should have been there in Wagon R long ago, but as they say, it’s better late than never. As a matter of fact, ABS should be an option with all cars; safety should be the main concern, rather than a luxury.

Motorbash Verdict – What We Feel

We had started this review with a question in mind, could Maruti afford the risk of meddling with its successful model, the Wagon R?

I think our question stands answered quiet well. Maruti has really done a good job by going an extra mile with their already proven model, to be even more desirable. Of course there is always some scope for improvement, but you could just be asking for more! And with the extra features onboard, the Wagon R flags at a dearer price of 4.32 lakh for the vxi variant ex-showroom, Delhi.

The new Wagon R carries a VFM quotient and defines it well. As for its competition, it now stands head to head against Hyundai’s i10 and Chevrolet’s Beat. But Maruti Suzuki’s reliability, trust and bonding with the Indian customer would indeed give this car an edge over the others and indeed improves its chances to continue the standard set by its own brand name. If there is a hatchback you cannot go wrong with, this is it.