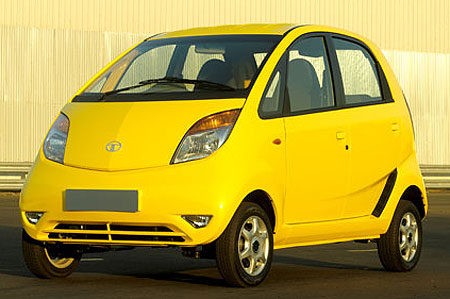 The cheapest car in the world!

This phrase was enough to create quite a stir in the World Automotive Scenario, and Tatas were extremely succeful at this. Auto Expo 2008 saw over crowded Tata Stall, even I tried to become the part of the crowd but as others felt, I was no different, I really was the part of the crowd saying a complete no no for the nano!

And with all these feelings I passed myself on to the Yamaha stall to have a look on the about to be launched (erstwhile) Yamaha YZF R-15. Two years or so passed and one day I found myself tackling the worst ever nightmare, Grandpa was finally up for a new car, sounds like a good news, but when I heard the name of the car, all the dreams shattered! He said tell more about nano, is it a good buy? And I said a strict no no again for the nano. But since he seemed to be determined on buying this 4 wheeled egg-like thing, I walked into the Tata Showroom and took a test drive. Amazing, it felt good. Atleast not as bad as it was thought to be. We bought the car (Don’t be so happy, more to come).

As the nano came out on the roads for the first time, the first complement I heard by a stray child playing on the roads shouting, “Nano, dabba gaadi”. Now, they don’t know anything about a car, they don’t know what on Earth is wagonR, or a Tata Safari or even a 800 but hell! They knew what a nano is. My face turned pale because grandpa was way too much attached to the car the first day, still I managed to laugh a bit with other companions including Grandpa, Grandmom and my younger cousin. And after a trip to a temple, with AC on I loved the way she performed, no significant power loss was there with the Air Con on. So after this short intro of the first drive on nano, I would like to come up with the highway experiences and city drives. 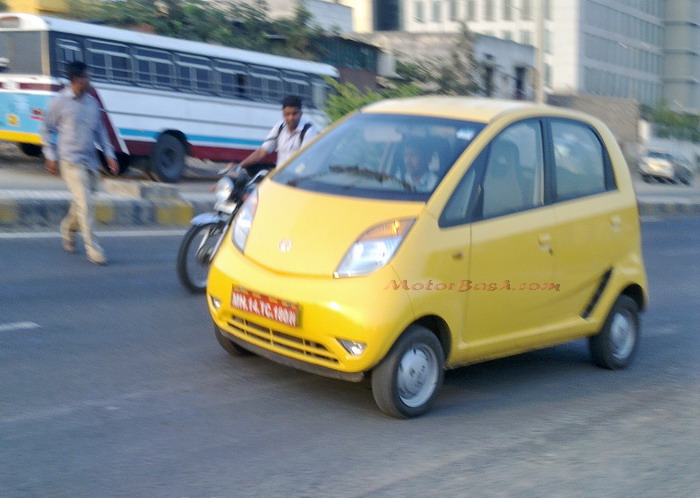 The nano from inside feels the most comfortable thing for driver because of it’s narrowing front-end appearance, feels exactly like driving a bajaj RE-175 Auto with a bigger engine and better dynamics. One is always assured that even in bumper to bumper traffic he can change the lane whenever he wants with full steering lock to either side, and thanks to the smallest pseudo-bonnet and lowest turning radius a Tata can offer. Though one always feels irritated with the most frequesnt gearshifts the car asks for, 5 kph on the speedo and still you need to shift in 1st else you will stall. One more bad thing, once you are stalled, you twist the keys and the engine will think on it whether to start again or not, now why on Earth it doesn’t wants to ignite itself even with a fuel injection feeding the cylinders? And yes, sometimes after a bit of rotations or sometimes even with 5 or more efforts, engine finally agrees to start, so don’t mess with it, it’s moody in it’s own. The 3rd gear comes in at 20+ kph and 4th comes in at 40+, but I can bet no one likes the repsonse he gets from the engine at these speeds because of blank throttle response at low engine speeds, engine needs to be rev hard to extract power but once over revved, be sure to get the same low speed feeling, blank spots again…. Aaargh! So it’s just peppy, expect nothing like a 800 like performance from this car. One thing that I found to be a bit better than 800 particularly, brakes! Yes this thing is quicker to make a hault with the help of it’s Booster Assisted Hydraulic Trailing Drum type brakes. 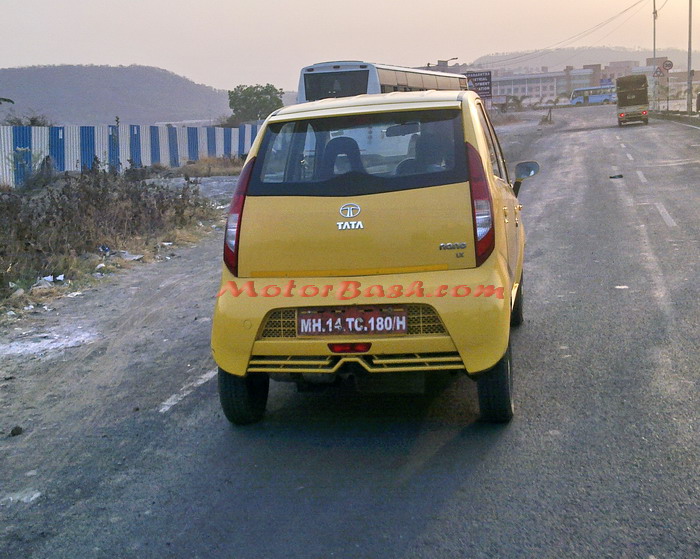 Believe me on this one, you will be amazed to know, but yes she can be on highways, End of the story. Side winds you are mightier than the cheapest car in the world, sorry we messed with you, trucks we are sorry to make a joke of your acceleration timings and top speeds you surley can beat us in 80+ runs, roads, we are sorry to you as well that we used to make fun out of your ‘can’t-be-seen’ uneven surfaces. nano tackles most of these but is freaky at highway speeds. Start driving like you are past 80 years old and you might like it for what she is, a city car. After driving it some 4 or 5 times on Expressway I was damn assured that one can drive this but he has to be as skilled as some Formula Car driver to keep it in a straight line. On the ‘Be Cautious’ note, we will discuss that below on the reliabilty section….

Alright, let’s talk about interiors and passenger comfort and boot (Happy? Don’t be)

Nano, might be the cheapest, but it scores much much higher on ‘being spacious’ and most loaded segment. with AC, power windows, and features like fog lamps up front and rear she indeed is loaded but I don’t know if you are trying to make it to Leh Ladakh or Khardung La Pass. Talking about the passenger accomodation, the best leg space is offered to the driver and the front left seat, rear is roomy for two, again with good leg and head space. Don’t ask much for the shoulder space, though it’s good and you don’t feel sandwitched between the side pillars. She can comfortably seat 3 people, driver excluding, else 4(simple, isn’t it?). And if you are thinking about a long trip in your new car and you have 4 or 5 people, better book train tickets because of unavailabilty of a proper boot, and even if you are determined to travel by nano, and have agreed on the ‘travel light’ ideology, be sure for some more cutting in your already shortlisted items, accessing the boot is a headache in it’s own, it generally asks for two people to pull the two strings like things on the either side of the rear seat. Pull the strings, unlock the rear seat(single person can try that out on his own if he’s strong enough to pull his weight along with the seat’s because seats slides forward), put some 4 bags stacked one on one, upwards with the parcel tray removed and damn! The driver can’t see anything! Book train tickets now. 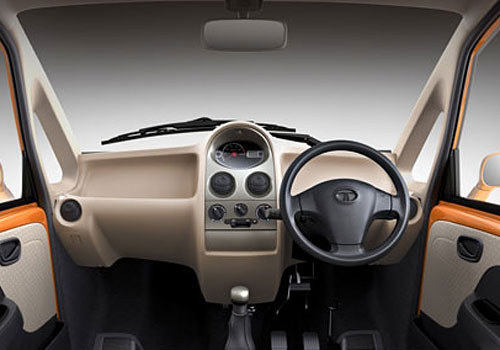 Reliability? And peace of driving

Since you are on highway because you neglected my advice of booking train tickets, welcome to the quality and peace of driving and reliability section. Nano isn’t that bad, I mean she won’t breakdown every here and there, every now and then, but one can’t trust this car’s operational stability, a single fault of yours on highway can depress your ability to think, don’t ever try to self start this vehicle in gear with your foot off the clutch, not even by mistake else you might end up with a blown ignition fuse, a kit kit noise as you try to hit the self, and a drying battery, yes only the designing team knows why they opted for such an electrical system which puts every load on one single 175 Amps fuse(did I just say 175 Amps? that’s a huge amount of current and none present cars except the super ones drive with such fuses, most of that cars have got an 80 Apms fuse that too never blows). Your doors and their locks might stop getting close or getting open when you want them, lights might malfunction, brakes may say a big NO when it’s the question of your life or death. And we all know the cars on fire cases and melting rear bumpers. Apart from that, while driving in rains, it surely asks for those above mentioned Formula car expertise with frequent Air Con on offs because the windscreen gets filled with fog, yes that not weird, but how quickly it gets filled is quite amazing, the engine at rear is accessible from inside the cabin and heat that seeps in can keep on fogging your wind screen even when you finally decide to get wet while driving, A CAR! I have experienced all this, so was asking you to book train tickets….. By the way, if you prefer to not to book the tickets, make sure that you don’t end up with some spins on the road specially when wet, the engine already makes the rear end heavy and after loading the car’s boot you actually are trying to make your car behave quite similar to those old Porsche 911s(I am hell sure Porsche gonna sue me for comparing the 1st Gen 911s with a… umm. nano)!

You seem to be a technical guy

With a twin in-line 4 stroke 650cc liquid cooled engine which produces the peak power of 33 horses right under your…. back, hauls this 650 kg approx vehicle upto a decent top speed of 110 kph, though the speedo which always malfunctions, can show upto a 115 kph, and this car packs some fun as well, try out some donuts and ‘drifts’ in loose gravel or sandy surface because this car is a rear wheel drive. Fuel efficiency depends and fluctuates from extremely poor 8.5 to a decent figure of 16-17 kpl and with AC on, expect even lower figures ranging from as low as 6 kpl to 12 kpl. I wonder why they missed a 5th gear? An overdrive 5th could have given this car great cruising abilities with even higher mileage figures, and yes the transmission is a 4 speed, not at all enthusiastic! Tyres are R12 that too with different measurments on front and rear, rear are a bit big, so don’t keep on driving with the stepny as it surley affect the dynamics and thus stability of the car. And now an important news, kindly never try cruising on the top speed number, the fuel pump cuts the fuel supply right away as you touch the top speed, this can turn out to be lethal and I can safely assure you this car is not as safe as you think and neither as safe as an Alto. Drive with seat belts on, it has got four and drive responsibly. Issued in Public UNINTREST by Team MotorBash.

Nano offers three variants as of now, all petrol, no engine options though one can opt for the cheapest base variant which just seems to be a ‘car’, no AC, simple bland interiors with fabric on seats which surely looks down market and black bumpers and black door handles on the exterior part with tube type tyres which is named as STD. The second variant offers AC and somewhat better interiors and tubeless tyres with black body bumpers and named as CX. The third variant happens to be the ‘high-end’ variant which offers body colored bumpers and door handles and front and rear fog lamps on the exterior part and AC, still fabric but a bit good feel on the inside. ICE (In Car Entertainment) is missing throughout the entire range. Don’t ask about the prices, they keep on revising it, last time I updated myself was 2,30,000 on road for the LX variant. 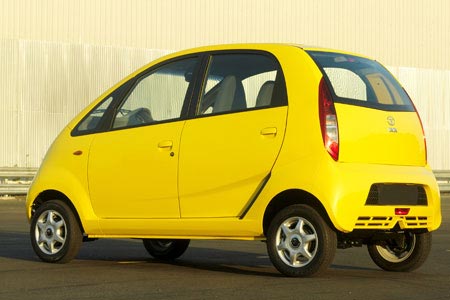 You haven’t listened to me till yet and asking for my words? Why I bought this thing if it’s so bad, this is what you are thinking. To be true, I never knew that a car can be so unreliable in real life conditions, secondly when I bought this car, there was a scheme about sticking some stickers, and get paid every month for 5 years, so this way I was sure that I have to pay only half price of the car. But coming to the good points again, she really is a boon for city driving, small cities, tightly packed cities or any other place which gives small measurements for driving. That’s it, this car has nothing else to offer. Book train tickets now atleast!

2 thoughts on “Our Take On TATA Nano”