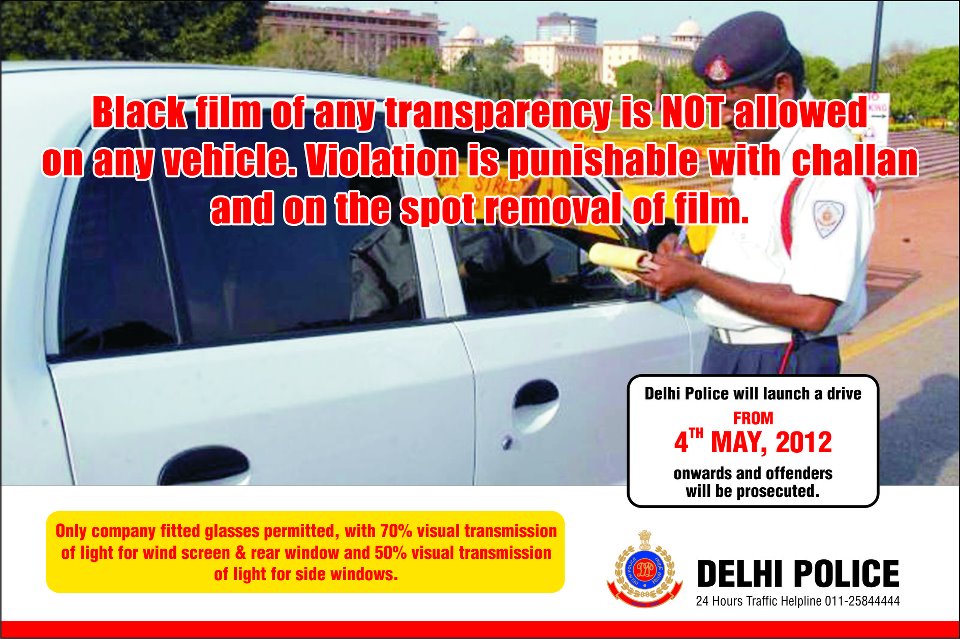 A sudden ban on sunfilms used on car’s windows by the Supreme Court has caused a lot of furore among the general crowd. The court reasons that this would decrease crime. While most of the people have termed this unreasonable, many of them say and feel that this is ‘yet another’ drive which would subside or change after a while.

Cast your view in the attached poll.

We actually asked a few people about their views on this ruling and let us see what they have to say….

ANIL ANUPAM MOHANTY – an Engineer by profession from Nasik

I would consider Supreme Court’s decision as a retrograde step and the system completely lacks the right vision.
Banning sun films won’t make much of a difference to the crime scenario. Rather the general mass is going to suffer thanks to the ever rising mercury. Most importantly only few parts of the country are witnessing the problem (based on ‘crime-on-wheels’ cases of recent times).

How the banning of sun films can affect the general mass:

How the Govt should tackle the situation to have a better control over the growing crime:

The decision is ridiculous. They say it is ok if manufacturers put tinted glasses with but you cannot put sunfilms with the same light penetration. How does it make a difference? The reason that is given is to reduce crime. I think so this decision is going to increase crime as if you leave any valuable in your car, it will be clearly visible from outside and the thieves will be much more tempted to break in and steal. Instead of imposing these pathetic laws, they should empower the police sufficiently and bring stricter punishment to reduce crime. Also, I have read somewhere, don’t know how true it is, that sunfilms hold the glass together if it breaks providing a protective shield to the passengers. If this is correct, then a good safety feature is going to be reduced. I am really not happy with this new ruling.

NAREN, an MBA from Chennai

Sun Films cannot be banned in India as such. The thickness or any other unit of measurement should be clearly defined to say what they do not want us to do.
In a country like India and to be more specific in a city like Chennai, driving or even sitting in a car without sun-film is the biggest punishment one can ever face.
Its not that once all the sun-films are removed from cars, then we’ll have a totally crime-less community. This is not the way to go ahead. It’s high time SC rolls back this judgment.

This appears to be a convenient and quickfix solution to a particular law and order problem. If the verdict could actually help to bring down the crime-rate the people shouldn’t complain about a litte discomfort and an increased fuel expense. But is this the best we can do? There must be a better solution than making to pay the whole nation to check the misdeeds of a few miscreants. If the people could find and offer a more suitable solution, I think the SC would certainly be willing to reconsider the ban. Who knows, the SC has unknowingly created an opportunity of another technical innovation here

I am keeping the sunfilm hoping the decision is reversed. At least till the rains start. Car usage will be reduced in the meantime. This is an absurd decision and will be taken back OR else, the aftermarket would be flooded with 70/50 VLT glasses instead of films for all cars. Switching to pre-tinted (with IR and UV rejection) glasses will definitely be cheaper than cancer therapy.

Although the ban is with a good intention of preventing/reducing crimes at the cost of causing inconvenience to millions of innocents, we have to also keep in mind that one who is determined to commit a crime will do so irrespective of the conditions imposed.
They can still work around the system and use window shades which are sold for Rs 50-100 and can be stuck temporarily on the window insides. What if they commit the crime in a transport vehicle or a truck which has no windows at all?
Banning sunfilms to prevent crime is similar to asking ladies to remain inside their house after 7pm to reduce crimes.
One has to fix the root of the problem instead of the branch alone.

The reason is not good enough. If the ban is required, it should be done on all (v)vip’s/politicians cars too.
Also, I am not going to remove it as of now. The ban may be lifted soon, If not, I am ready to pay the fine whatsoever it is.
I am not going to sacrifice the protection from UV rays; overheated interiors, privacy, and a much safer ride especially in nights for my wife when she’s driving alone go for a toss for a stupid reason.
The reason is like the Gurgaon police said about rapes happening in and around Delhi, if you wear revealing clothes; you are bound to be raped. No wonder The SC is in Delhi and thus has the same sick Delhi mentality.

This verdict is completely unjustified and irrational. I can say this without the help of any statistics that 99.99% of public who put up sun films do it for their convenience and protection from heat. Normally every car’s window is 30% tinted. Government can’t interfere within this and cause inconvenience for the public. Moreover, I think this will be raised soon, because almost all the cars on the road have customized sun films on them, and they can’t ask everybody to take it down. it’s just another gimmick by our government to earn money. Just like the “helmet compulsory” drive by the government.

If government truly wants to stop anti social mischiefs, then it should think of something else such as patrolling and keeping a check over stranded and stray vehicles, rather than coming up with such nonsense ideas! They cannot compromise general public’s convenience for something they are incompetent to control. its like saying if you want to catch Osama bin laden, bombard the whole of Pakistan. He’ll eventually be dead.

It’s pretty clear that general public have not taken the ruling positively and there is a lot of frustration and dissatisfaction among them. Government and the Supreme Court should also address people’s concerns (most of them listed above) to ensure they get respected for their position and responsibility!

We thank all the people who have responded and we hope sense will prevail and we will have the Supreme Court or someone clarifying and amending this decision.

What is your view on this? Do write them down in comments section. Let us ensure we vent our frustration and in a ‘correct’ way.

DISCLAIMER: We, in no way, intend to dishonor the Supreme Court of India. It’s the ruling of sunfilms which is a big question mark here and we only want that people’s voice reaches the correct ears, somehow!