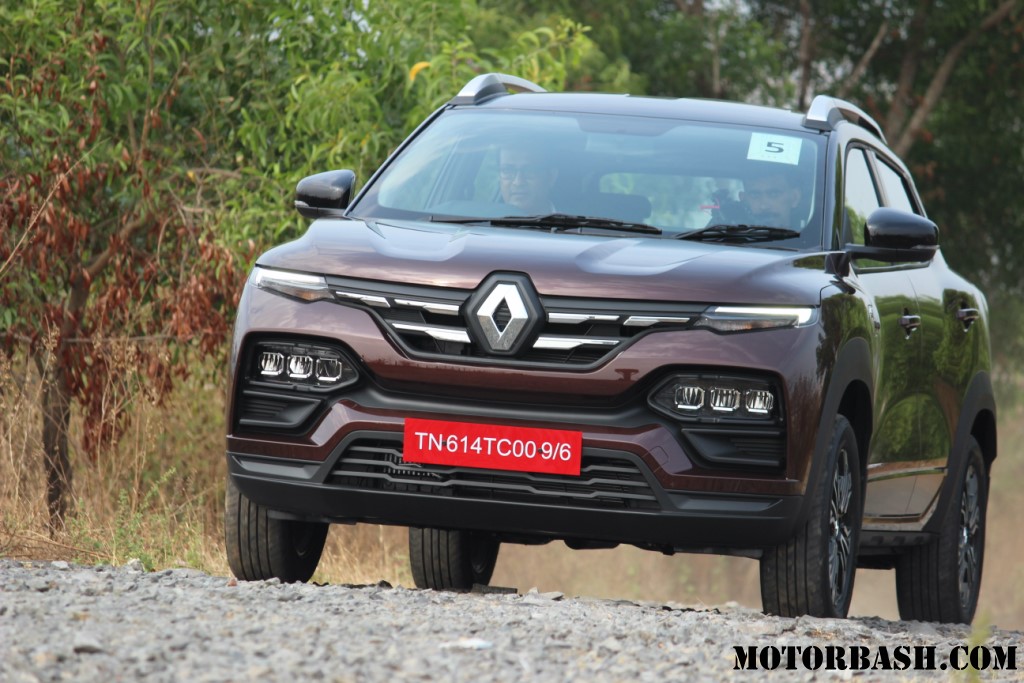 In this Renault Kiger review we talk about the latest entrant in the sub four meter compact SUV in fair bit of detail. Do not miss out the pictorial view at the end…

Renault tasted extreme success with its Duster in the compact SUV segment. It, not only, brought the French in the game in India, but it also allowed us to taste first blood of how good, well-mannered, spacious 5 seat SUVs can be. However, that game has been taken forward by other players in the market and Renault has gradually lost out, simply because it failed to pay heed to the Duster.

However, the French has an ace up its sleeve. It has showed that it intends to get back albeit in a slightly smaller form. And it is the CMF-A platform that it has chosen to take the baton ahead. It recently introduced the KIGER compact SUV in the sub four meter space and rivals quite a lot of players from different manufacturers. Few months earlier, alliance partner Nissan also launched its version of this platform – the Magnite, which has opened to a bumper response.

So, to test Renault’s version, we flew to Goa to get a good first drive of the all important car. The question is – does Kiger have enough to bring back Renault in the reckoning in the compact SUV segment again. Let us talk about it in detail…

In straightforward terms, Kiger looks a muscular, grown-up sibling of Kwid. Now, that is not a bad thing at all as the compact hatchback itself looks very handsome. At the front, Kiger comes with large LED DRLs and a well designed front grille. Just under the DRLs are positioned ‘tri-octa pure vision LED headlamps’ – both connected with a black colored plastic. Overall, it is a busy front with a lot of elements, however, it all gels well and the car does look well designed.

From the side profile you get a good idea of the falling roofline which gives it a coupe-ish styling. And it is the rear that is even more interesting than the front. There are those protruding C-shaped LED tail lamps which give the car a wider appearance. Sportiness is further accentuated by that faux skid plate and a hefty bumper.

In essence, Kiger looks aggressive and very thoughtfully designed and in my opinion it will please most of the prospect customers.

When we move inside, it greets us with an all black cabin, which does look fresh but slightly monotonous. The dashboard has a large 8 inch touchscreen with a decent display for all your infotainment needs. It can be paired with your smartphone and comes with Apple Carplay and Andoid auto compatibility.

The steering is partially leather wrapped and is almost perfect in size and it feels good to hold. It appears to be slightly flatter from the bottom. The control knobs are lifted from the Magnite and look beautiful.

There is ample amount of space to hold your stuff. Kiger’s dash comes with two glove boxes with a combined capacity of around 15 liters (top glovebox is around 4.4 liters and bottom box can hold 10.5 liters). All the doors have adequate space to hold water bottles along with other knick-knack. Then there is some smart space just under the elbow support which has a rolling door. All in all, Renault informs that Kiger has a total cabin storage volume of 29 liters.

Though there is not a lot of that soft plastic that you will see but the overall quality of materials used is fairly decent for its price.

Renault has showcased with its Triber that it can utilize (the lack of) space very efficiently and the same engineering has gone on to the Kiger. The driver and passenger both have plenty of space to stretch and move around. At the rear also, passengers have really good amount of knee room.

Despite the falling roofline, I, a 5.9 footer, had a few inches of head space left. So, in terms of that we should give it to Renault. The rear bench can accommodate a middle passenger in fair bit of comfort and he or she would cherish the absence of any hump on the floor board.

Thigh support, however, could have been slightly better and the passenger seat a wee bit lower. This, coupled with, relatively smaller rear windows and all black theme, does make it a bit claustrophobic on the inside. It could be a minor issue during long drives.

At the front however, the seats are pretty high-set and offer the driver a very commanding view of the front, and the sides. However, the ORVMs could have offered a better view.

Considering that Renault would have eaten up a lot of space to offer comfortable and spacious human space (out of the 4 meters it had), things are the back would be miserly..? Right..?

WRONG! Because Kiger comes with segment best boot space of 405 liters. Most of its rivals are in the range of 350 liters! This is very clever packaging of the same space that is available with everyone in this segment.

The trunk is fairly deep as well but the loading wall is slightly higher. The good news is that there is no metal out there which means no paint chipping or scratches. Renault, has in fact gone to the extent of offering compartmentalized space which will help you keep your stuff segregated.

Kiger comes with two engine options. There is a three cylinder 999cc, naturally aspirated motor that is good for 72 PS of peak power at 6250 rpm and 96 Nm of max torque at 3500 rpm. It comes mated to a 5 speed manual transmission and you also have the option of an AMT gearbox.

The other choice you have is the turbocharged version of this same engine which kicks the power output to 100 PS at 5000 rpm and the torque output is bumped to 160 Nm between 2800 to 3600 rpm. It is paired with a 5 speed gearbox.

There is this fourth option that you have which is the CVT box mated to the turbo motor (only). While the power output here remains unchanged the torque output decreases to 152 Nm (between 2200 to 4400 rpm). There is no diesel option in the lineup and don’t expect one either. We drove the turbocharged manual top of the line RXZ for this review.

Kiger – How is it to Drive?

I will keep it short and simple here. The engine has fair bit of grunt and feels reasonably powerful to drive so that you can easily overtake on highways. Tractability is again good for the turbo motor, however, there is a lag under that 2000 rpm mark. The turbo kicks in without any ‘push’ but the response is very acceptable all the way till mid-high rpms. At the redline, there appears to be plenty of engine noise without a lot of forward progression.

The gear throw and the feedback from the gearbox is however a little sub par. The gear lever jitters while in motion and I believe the gear slotting could also have been slightly better managed. While in motion, you can hear a fair bit of noise from, well, a lot of things – wind, tyres and even the horn that appears to be placed inside the passenger cabin!

There are three drive modes in the car – Sports, Eco and Normal that can be engaged through a round knob near the gear lever – on the go. These drive modes alter the throttle response, steering and probably the intrusion of the ABS as well. In the Normal and Eco mode, the steering is lifeless – to the extent of being boring! But once you enter the Sports mode, the steering adds a fair bit of that much needed weight and the motor suddenly becomes more energetic. In the Eco mode, the engine response is slightly restricted and the focus is on extracting more from that costly drop of petrol. These modes are signified by cool displays on the instrument cluster. Each mode has a dedicated theme highlighting the needed stuff.

Ahead of my turn of the Kiger, I drove the Duster that was my convoy car. And there is no denying the fact that it still is one of my favorite when it comes to on-road manners. Though you should not expect Duster like poise on the Kiger, it does not disappoint. I mentioned about Duster specifically to set the bar.

Let me start by sharing the feature list that I haven’t told you yet. In terms of safety, Kiger is loaded with 4 airbags – one for the driver, one for the passenger and two on the sides at the front. There is ABS and EBD apart from front parking sensors and a rear parking camera (that is nicely embedded inside that Renault logo).

The top of the line RXZ Kiger that we drove is offered with 3D sound by ARKAMYS and has four speakers and four tweeters. All of this ammunition and I could only listen to the radio songs that the local RJs played. Sound output is nice and it should please most ears, and probably to even the connoisseurs of music. Then there is an air purifier which is a nice add on. However, despite being fairly loaded, Renault does not offer the Kiger with a sunroof and cruise control.

Now the most important thing – Should you buy it..?

At a starting price tag of Rs 5.45 Lakh for the entry variant, Kiger is India’s most affordable compact SUV. It even undercuts its sibling Magnite by a whisker. Heck, in this new world even top variants of WagonR are costlier! The top of the line RXZ manual that we drove costs Rs 8.55 Lakh ONLY. Kiger also undercuts premium hatchbacks like i20 and that is extremely surprising for a car in the compact SUV segment today.

Summarizing it, Renault has nailed the pricing of Kiger and it is a lot of car for that amount. You have all the gearbox options as well. No doubt there are a few areas where Renault has cut corners, but none of them are deal breakers. So, if you are in the market for anything around that 7-9 Lakh price bracket, Kiger should be in your list.

1 thought on “Renault KIGER REVIEW: Can It Replicate Duster’s Success…?”